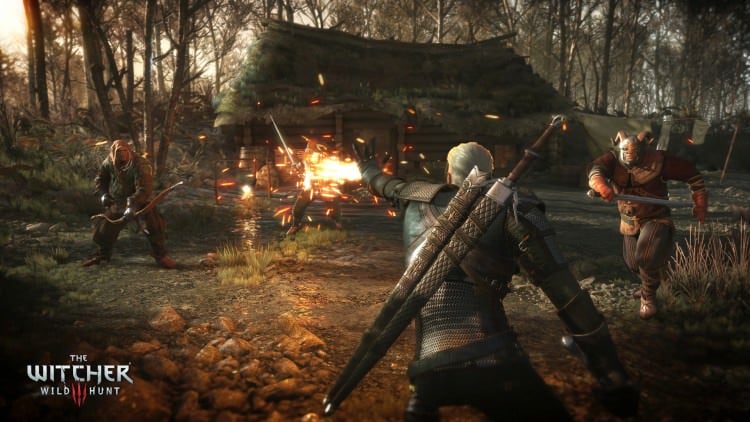 After watching almost an hour of gameplay footage, I sat down with CD Projekt Red level designer Miles Tost, and tried to get him to answer some basic questions, as well as the hot ones our community asked in the respective Fextralife forum thread.

Thief: Tell the community a little about yourself and your involvement within The Witcher 3: Wild Hunt.

Miles: I am a level designer. I design levels. *laughs*

Thief: Interesting. Thank you for your time!

Miles: *laughs* Well, you wanna go into detail then? I am directly involved in creating the open world of The Witcher 3. Imagine you have a wide open space, and you need to fill it with surfaces and nature. You may have a forest there, but so do you over here – so how do you justify it, avoid redundancy and make it interesting?

For example, often our quest designers approach me and go “Hey, we have this quest, and it involves an ancient ruin”, and it’s my job to say “Oh yeah, we have some free space right here, I’ll whip one up for you”. In turn, I may approach the quest designers and tell them about this cool location I imagined and whether they can think of something awesome to take place there.

Thief: That must make for an interesting chain of command. If everyone approaches everyone equally, how do you keep things coordinated?

Miles: Well, I don’t know how it works in other studios, but with us, the hierarchy is really that flat. Sometimes even a gameplay designer, whose primary focus may be combat design, comes up and goes “I designed this really cool feature, can you use that in your quest / at your location?” So yeah, we really do stick together that closely, and it works.

Thief: Now that we know each other, I can finally confess: I have honestly never played a “Witcher” game myself. The funny thing is, given what I know about it, I think I’d even absolutely love it-

Miles: Oh, tell me about it! I have a backlog that just keeps piling on and on.

Thief: So imagine me then, as someone who loves and understands most common concepts of RPGs, but still has not played this particular series. How would you convince me? How does it set itself apart from other popular modern RPG-franchises?

Miles: First of all, in The Witcher, we’re not telling a classic high-fantasy story. It’s actually more of a “low-fantasy-story“, if you think about it. People tend to compare it with Game of Thrones, and there are definitely some more or less intentional parallels there. It’s gritty and dark. There are no black/white decisions, and that’s what makes those decisions matter so much more. Morals, death and love, they all consequently have shades of grey to them. So that’s what makes it interesting to me: Seeing towards which direction morality will be bent throughout the story.

So if you’re interested in roleplaying games -for grown adults, really- with a rich story, then it’s definitely for you. To talk about The Witcher 3 in particular, take that and add an open world that enables you to freely explore it and make those kinds of decisions in it; and I think you have the recipe for one really amazing RPG experience. 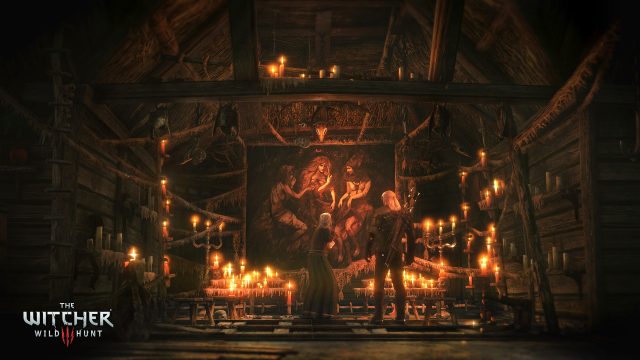 Thief: Does that mean Wild Hunt is as good a place as any for other guys and girls like me to start, or is it absolutely necessary to have played the previous two games? In other words, how coherent is the story that’s been spun over course of the series?

Miles: If you put it like that, I’m inclined to agree with that statement. Obviously, I can only urge everyone to play the previous installments, and also to read the books, too. But it’s not required to have done all this to understand the main storyline in The Witcher 3. We have reached a point with the third game, where there is sort of a new beginning for everyone. Of course old, ongoing storylines have been subtly carried over, but we devised a relatively clever way to do both that, and at the same time not give new players the feeling they’ve majorly missed out on something.

Ontop of that, we have a uh… well, we don’t say “tutorial.” We don’t have a tutorial. It’s more of an “introductory experience”, during which a new player is being introduced to the world of The Witcher itself. That way, you can quickly understand how it functions.

Thief: That was a good “introductory experience” to my primary mission: Community questions. I have gathered as many fan questions straight from the Fextralife forums as possible, and I need to bring them the answers they want. It’s a personal safety thing, really.

Thief: We just talked about connections to the old games – which of course applies to veterans who import their savegames. How severely are those imports going to affect the experience, compared to someone starting with a brand new character? For a specific example, Community member MrMango786 wants to know: Will they be bold enough to have someone’s little sidequest or something missing if they were killed in TW2 for example, or is everyone who could have been killed a cameo only?

Miles: It’s hard to answer that without directly spoilering the story. Let’s just say we have those things from “extreme”, all the way to “only slightly,” definitely. However, I cannot stress enough that we don’t want new players to feel excluded or as if they’re missing out. As I mentioned in the previous question, obviously, you will understand a lot more of what’s going on if you have played the previous game and read the books as well, because we have planted hundreds of little winks to previous stories all over the game – but if you’re unfamiliar with those, you simply may run past them.

Thief: You’ve gone open world now, so you have to answer typical open-world-questions: Will Geralt be able to buy or rent a house now, or have any other type of “homebase?”

Miles: Whenever you start creating a new installment of an established series, you’re gonna ask yourself what you can add, and what new stuff you can implement that you have never tried before. So that would be a fair question in that regard. On the other hand we want to stick to the heavy emphasis on story; so we never got past that stage, for one very simple reason: Geralt.

As you know, our games are based on the novel by Andrzej Sapkowski. Now, our games take place after the events in the novels, so that does make for quite the creative freedom in one way; but also for some limitations in the other. We have to stay true to Geralt’s character if we want to create a coherent story, and things like owning property like that simply didn’t seem appropriate for a guy like him. 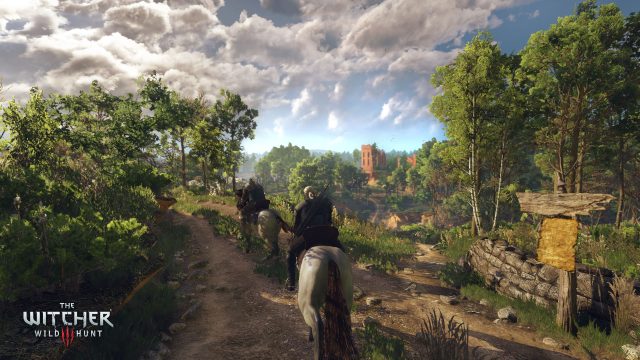 Thief: During the presentation, I was really impressed with the little trophy Geralt had swung so carelessly over the back of his horse [Geralt was shown riding back into the capital city with a dead Gryphon’s severed head in his luggage at the beginning of the demo]. In all the released material, you see the darndest creatures lurking about, from Gryphons to Dragons and whatnot – We simply have to ask: Will we ever be able to mount something different than “just” a boring, old horse? Well, I don’t know if noticed it, but it’s pretty dead.

Miles: *laughs* I can’t give you too much details, partly because my primary field is level design, but… without spoilering too much… let’s just say there may be story-related events that… cater a bit to your request.

By the way, what I can talk about is something related to that: Geralt can operate boats now and go out on the ocean. Like people could see [in the official trailer], the game world consists of one main landmass, and many smaller islands surrounding it. The player can explore these at will by just hopping on a boat this time around.

Thief: (Community member) GH456544455 wants to know: “Why is completing quests the only way to gain EXP in The Witcher 3, with random encounters [yielding] nothing but resources? Why did you decide to take that type of freedom away?”

Miles: I can’t say anything about that… sorry. It’s absolutely not my department, so I actually don’t know.

Thief: Don’t worry about it. I’m sure they’ll at least make it quick, if I scream loud enough.

For the final question: If you could magically change or undo anything in the previous games, what would it be? Be as specific as you can, even if it’s that ONE ugly leaf in that bush you totally hate.

Miles: That’s a tough one. Now I don’t wanna speak ill of other people’s work, this is really just issues I have with my own stuff. Obviously as a level designer, I have a certain expectation when it comes to the quality of my work. And some caves and dunegons in The Witcher 2 – well, not all of them but some of them – they had a considerable amount of backtracking. I wish I had found more elegant solutions in some of those cases. There are examples of other games in which they handeled it really well, like you have this turn going here, and then it drops you off back at the start…

Thief: Personally, I don’t even like it too much when it persists like that throughout a game either. Some give me the impression as if I just explored one of those walk-through, scary ghosthouses in an amusement park, when things always fall into place too well.

Miles: I agree, but there is a third option: I like it the most when those caves actually have a second exit, and take you somewhere. Not only is that more natural, it also really sustains the desire to and the fun in exploration. That’s kinda what I aimed for when designing the open world of The Witcher 3. 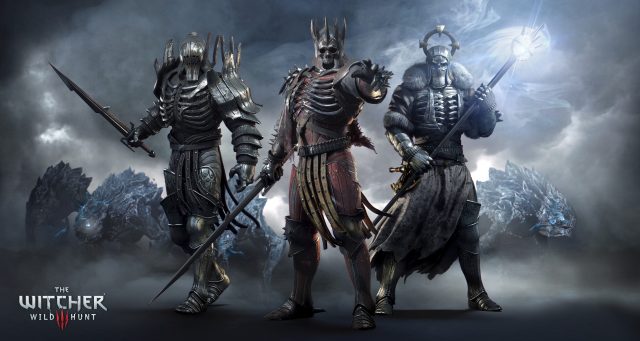 Thief: Now, actually I have one more question, but the last one doesn’t count for the interview, because it’s terrible. So at this point, from everyone at Fextralife, I would like to thank you very much for all your time, and the thorough and insightful answers!

Miles: It’s been a pleasure, thanks for your questions.

Thief: No more procrastinating then. *Sighs deeply* How many hours of the total game time will players be spending without pants on?

Miles: *laughs* I really can’t answer that as precisely. But it remains a steady element in the game, and we’re still running not short of those certain sequences… Oh lord, that was NOT meant to sound that way!

Looking for more? Of course you are. There’s no rest for the Wiki’d

Miles was great, support his team and the FextraLife community by preordering through the FextraShop

is the resident goodie-sneak-shoes of Fextralife, mostly handling design works. Sometimes I say things and people laugh - I'm too German to understand why.