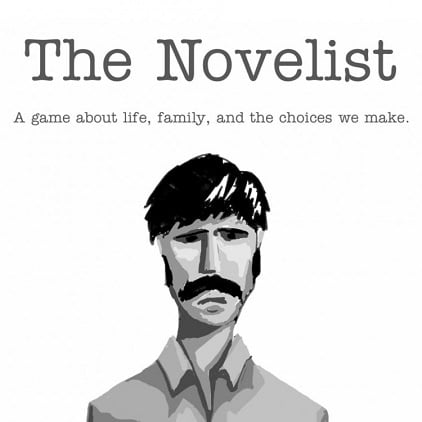 The Novelist is an interactive story based PC game with stealth elements made by Kent Hudson, you might know him or not for his development in AAA games like Deus Ex and Bioshock 2. Kent however left that all behind to work on his own game, and with the passing of time his emotions were transferred to the game, this created The Novelist.

The plot of The Novelist revolves on the Kaplan family which have ran into many problems during the year: Dan Kaplan, father and husband, is desperately attempting to write his latest book even though he has that disease known as a the writer’s block. Linda Kaplan, loving mother and wife, is also attempting to spend more time with the family and dedicate herself at painting again. Tommy Kaplan, their son, is also trying is best at school, but also wants praise and help from his family.

The Kaplans then decide to spend their summer vacation in a beautiful house that was never bought, despite it being a very cheap. During their stay, you, a ghost, must uncover their memories, read their thoughts and decide how to affect the Kaplan family while also uncovering the mysterious past of the house. Needless to say, these choices aren’t actually simple choices and every choice has a drawback, you even have the chance to select an additional choice, but this is a minor choice that will only slightly affect the game, it’s the big ones you’ve gotta be scared of.

There’s also some stealth in this game, albeit only a small part of it. You obviously can’t show yourself in plain sight or the Kaplans will freak out about the fact that there’s a ghost in their house, in the game they don’t try to kill you, but if you get spotted a certain amount of times you won’t be able to make a choice that affects the person that saw you, you can also possess objects that have a light source inside of them like lamps and candles, but the stealth in this game is pretty weak. Just in case that stealth isn’t your favorite genre, you can disable it.

The graphics of The Novelist are pretty minimalist and cartoony, but I really like the color and details put in every object, it’s not the greatest art style, but it certainly looks good for your eyes. The music instead is mostly composed of small pieces mixed together that play while you uncover the secrets of the family, the only complete tracks are heard only when they show the outcome of your choices, but the music is good overall, following the theme of minimalism. 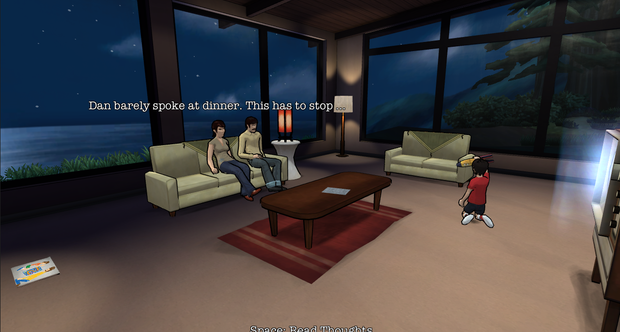 There are reasons not to like The Novelist though, personally I found the history of the house a bit underwhelming even though it solved the secret of it being never bought, but also because of the ending. In the ending you’re forced to make one single choice and minimal choices are left behind, I think that the developers attempted to make the ending serious, but it fell flat in my opinion because in that precise moment only the decisions you make in the ending count, but at least the journey was good. The Novelist is also a very short game, on non-stealth mode it will take you roughly 10 minutes per level, so….One hour I guess if you speed run? Luckily the alternate endings make it worth it to play the game again, if you are not bored of the underwhelming stealth gameplay, that is.

The Novelist is still a game to try to play at least, it certainly won’t compete with many other games, but it’s a unique game since you write your own novel, all the choices you make are in the end flattened into one novel, one novel that will tell the story of the people you affected, a journey of life, The Novelist’s simple premise might yet be the most real and powerful theory in a videogame: Can you fulfill your dreams without pushing away the people you love?

That’s up for you to find out.