If you’re a fan of Turn-Based Strategy games like Discipiles, Heroes of Might and Magic, or even Age of Wonders, then you might want to check out Immortal Realms: Vampire Wars. Created in the same vein, only with a heavy Vampire theme, Palindrome Interactive might be on to something here.

While there have been various forms of turn-based strategy games over the years, there have been very few that play quite like Immortal Realms recently. I don’t really understand why not either, if I’m totally honest, especially with resurgence of table top gaming. Immortal Realms plays very much like a digital board game, but let’s get into it a bit and discuss it in more detail.

There are 3 Vampire factions in Immortal Realms, each with their own heroes, combat units, spells, and campaigns. In the beta, which is the version of the game I have played,  each campaign has 4 missions, for a total of 12. Just looking over their FAQ on Facebook, it appears this will be the same number Immortal Realms releases with. 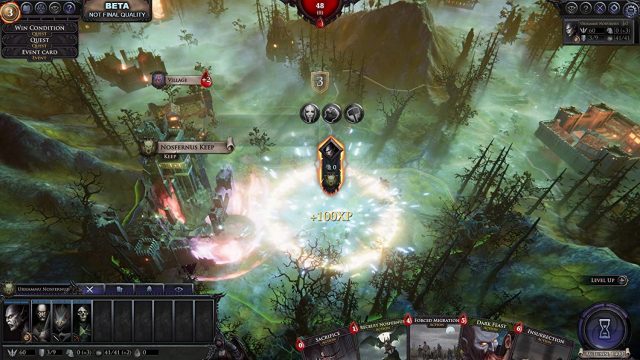 This may feel like a small amount, but the first mission alone took me somewhere between 2-3 hours, and they seem to only get more and more complicated. That’s roughly 25-35 hours of gameplay, and that’s before you take into account Skirmish and Sandbox modes.

Skirmish Mode allows you to challenge another AI Vampire Lord for supremacy of a map, and is a “Deathmatch” of sorts, because it is purely a combat scenario. You pick the map, your faction and their faction, the units, spells and equipment you each begin with, and then duke it out. You win when the other army is eliminated. This allows you to hone your combat skills, and create easier or more difficult scenarios at your leisure.

Sandbox mode allows you to create a scenario much like Civilization, where you can set the victory conditions, and make a stand alone “mission” rather than just a Deathmatch. This is likely what you’ll be spending a good amount of time playing once you finish the campaign, if you wish to play more, since it allows you to continue with the same type of gameplay as the campaign.

Concepts of the Game

In this section I want to discuss the various things that this turn-based game does, so you get an idea as to the complexity or simplicity of it. In my opinion, this is a huge part of what generally makes strategy games fun or not, so it’s important to talk about. 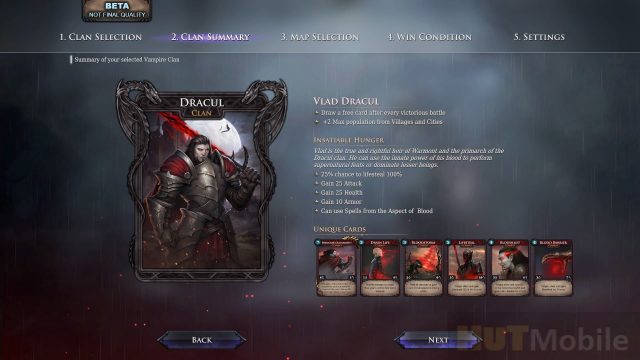 The general concept of the game is to gain resources, build your army and conquer the map before you are conquered. The campaign of course has custom objectives for each mission, but if your just talking about Sandbox, then that is the goal. None of this can be done though, if you don’t have enough Blood.

In Immortal Realms you tax Blood from villages and cities, and spend this Blood to recruit troops, upgrade buildings, buy equipment for your Lords, and purchase spells and buffs if you wish. All of these things use the same currency, Blood. 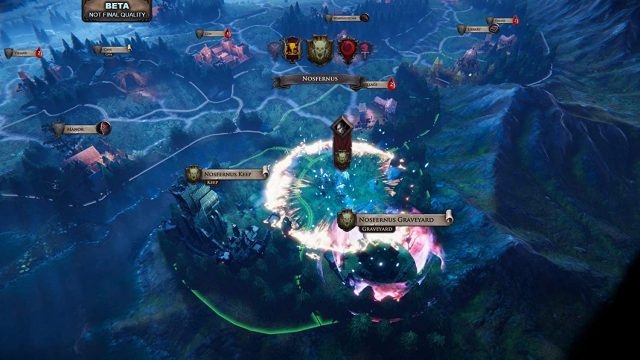 Blood is consumed every turn by the Units that you have recruited, so it’s possible to recruit too large of an army and then not be able to do other actions. This means balancing your army size, finding new villages and cities to Claim, and deciding where and when to spend your Blood are important. You can also “feed” on Villages and Cities to gain Blood immediately, in exchange for setting back the rate at which a City or Village produces Blood.

As players gain Blood they will undoubtedly recruit new units into their army in order to grow stronger and Claim new territory. Each unit costs a certain amount of Blood, with more powerful units costing more. There are 3 Tiers of units in Immortal Realms, but you will need to unlock Tier 2 and Tier 3 before you can create these units, and that requires gaining experience as well as upgrading your Buildings.

Units cannot be upgraded with equipment, but they can gain “Veterancy”, which increases their stats and effectiveness in combat. Each time they fight a battle and survive they will increase in rank, and there are cards you can play that will also increase this for you. You can even upgrade your Blacksmith to train troops for Blood later in the game, and Veterancy plays a significant role in the success of your army. 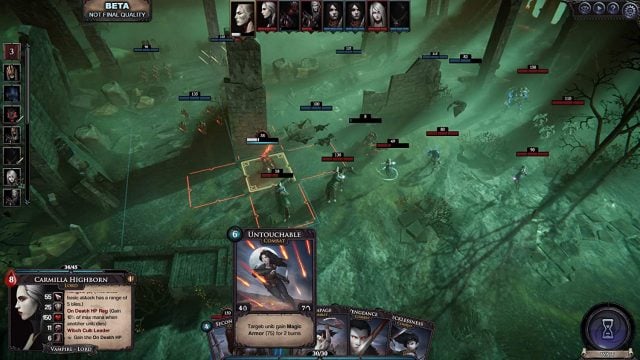 Each combat unit has its own ability it can use in combat as well, and these play a vital role in your success or failure in combat. For instance, the archer unit can fire at longer distances every 2 turns, allowing it to hit enemies it wouldn’t otherwise. And, Acolytes can heal a unit every 3 turns, which can significantly change the course of a battle and can save you a unit or two that would have been killed.

When you Claim a territory in Immortal Realms, you will also gain control of any building that is on it. Whether it’s a Blacksmith, Library, Village, etc you will now be able to use it’s function if you have enough Blood. These Buildings can also be upgraded, using Blood to give you even more benefits like more mana regeneration, or produce more Blood (in the case of Villages). Buildings can be upgraded multiple times with different effects that you can choose from.

Through out the game you will gain cards that you can play for their Blood cost that perform certain actions. Some allow you to recruit troops cheaper, while other replenish the health of your army or even the mana. You will gain more cards every 4th turn, you can buy some from the Library, and sometimes you gain them as rewards for completing quest objectives in the campaign. 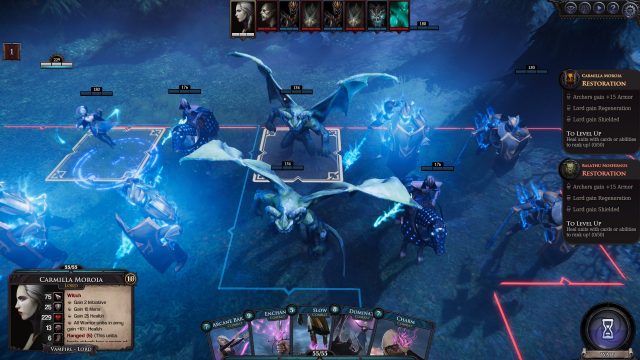 The Cards are important, especially the ones that allow you to gain Blood in some way, because they can speed up the rate at which things are accomplished. For example, you can play a card that gives your army more Action Points, allowing it to Claim more territory in one turn, improving your Blood gain significantly.

Every player will have a Vampire Lord that is the general of his or her army, and this is your most powerful character. While you can recruit other Vampire characters that are quite strong, they will not be the general of your army. Your Lord will be able to cast spells in combat, and can also equip a weapon, armor and accessories.

Your Lord will also be able to gain experience that can be spent on his or her blood line, which gives you passive benefits like reducing upgrade cost, or more Attack damage for your combat units. As the game progresses and you Claim more and more territory, and defeat armies, you will gain experience that can be spent here, and you will have to decide how to spend it.

When you begin a battle with another army, you will get to select where to place each unit on your side of the map. And then Units will take their turns based on their initiative. Units also have their own amount of Movement, and they  can only move left, right, up or down, but not diagonally. If they can move far enough on a turn, then they can also attack an enemy unit. 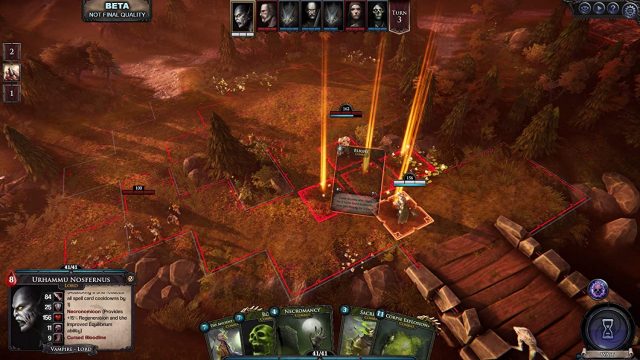 When attacking, a unit will deal its damage to another unit and then that unit will retaliate for a lesser amount of damage usually. Then the next unit in the queue goes, and things continue.

Units also take more damage when “Half-Flanked” and “Full Flanked”, and units cannot pass through other units (whether friendly or not), or other things that block progress. This means positioning on the battlefield is key, because units die very easily and you are almost expected to lose a few here and there.

Combat plays out a lot like combination of Chess and other turn-based games, where you are trying to read your enemy’s movements and determine where he will focus his attack. Flanking deals tremendous damage, and certain units deal increased damage when flanking, so you always have to be wary. This prevents you from full on charging into combat, and means formation and strategy are very important.

Immortal Realms is not perfect. The voice acting is terrible and the cut scenes are hard to watch, but I think the thing that has really impressed me about Immortal Realms so far, is that it was a game that I’d never heard of before, and it has a ton of detail that I would not expect from a studio of about 15 or so people. There is enough there in the gameplay department to keep me playing through the campaigns, and I actually stayed up late last night just playing for fun, which is something I must confess doesn’t happen nearly as much as I’d like these days. 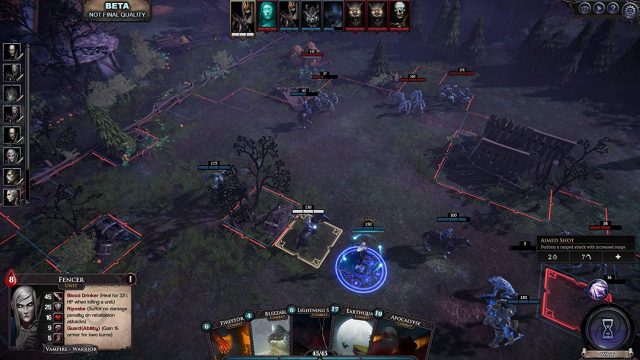 If you’re like me and you miss games like Disciples, Heroes of Might and Magic, and even Lords of Magic (as broken as it was), then you should really check out Immortal Realms: Vampire Wars. It’s 34 USD on Steam and it will be coming to PC, Xbox One, Playstation 4 and Nintendo Switch on August 28th. If you pre-order on Steam you will gain access to the Beta of the game, which is what I’m currently playing, and you can play right now.

Immortal Realms: Vampire Wars doesn’t reinvent the wheel, but if Palindrome Interactive can continue to add more content to the game, more units, factions and campaigns, then I think this might just be my new turn-based franchise. Maybe…

If you’re looking for more previews be sure to check out next Desperados 3 Overview: Return To The Wild West and Last Epoch Patch 0.7.8 Early Access Preview. You a can also check out Alaloth Champions Of The Four Kingdoms First Look: Isometric Souls-Like RPG Indie.