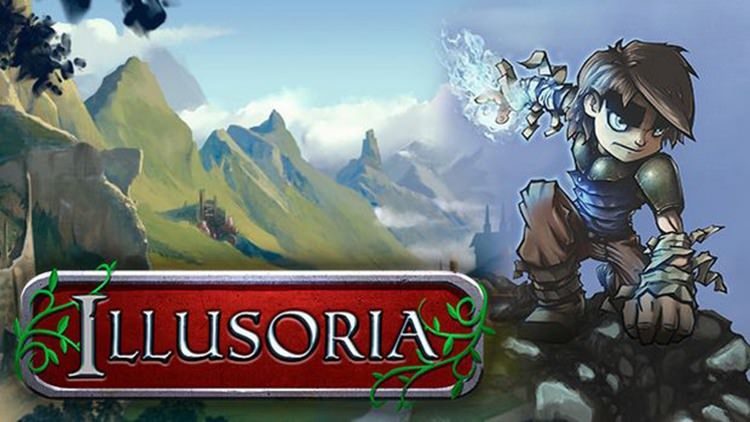 Under the Bridge’s Illusoria is a 2D platformer that tries to bring back the nostalgia of the late eighties and nineties that many of us have from playing some of our favorite games like Prince of Persia and Castlevania.  While traversing through the game’s 12 levels, there will be occasions that seem to be viciously unfair and sometimes unnecessarily so.  But for those willing to try, fail, try again and try some more, enjoyment can be had when playing the game.

The story of Illusoria is a simple and straightforward one.  You must embark on a a quest to save the land of Illusoria and it’s empress from evil. An ancient prophecy tells of a villain known as The Puppet Master who will emerge to corrupt and destroy Illusoria and all it’s inhabitants.  The empress’ uncle and most trusted adviser Jerome tells her of a portion of this prophecy that also says when The Puppet Master arrives, a hero known as the Guardian of the Flame will also appear.  The Guardian of the Flame is the only person who can stop The Puppet Master, but who is this hero and when will they arrive?  Could you be the one to save the empress and restore peace to Illusoria? 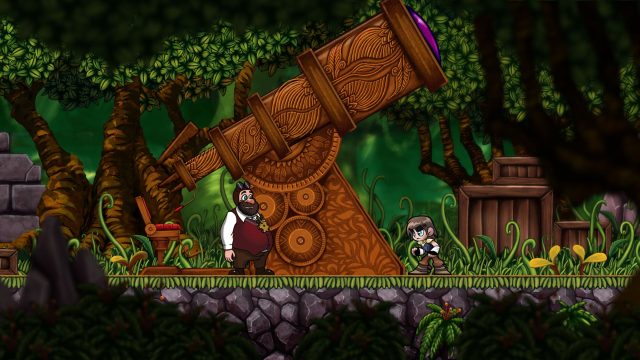 Playing through Illusoria’s levels will take you throughout the land, from decrepit ruins to mysterious woodlands and everywhere in between, including an abandoned meat factory!  You play as a character with no discernible name other than boy, who doesn’t speak and who might just be the only person who can help defeat The Puppet Master.  You meet other characters in the game who help to fill time between levels and revel in the beautiful artwork that helps to illustrate Illusoria’s story. 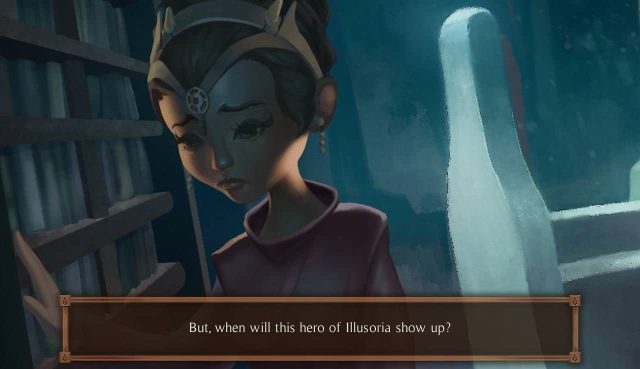 The gameplay in Illusoria is very easy to pick up.  Movement is as you would expect it to be with your character able to walk, run, jump and attack.  The game can be played with a keyboard or, as I played most of it, using a controller.  I plugged in my Xbox One controller and the game recognized it and mapped everything automatically.  For me personally, playing a platform game with anything but a controller seems a bit blasphemous.  The first few areas of the game help to familiarize you with how to perform the different auxiliary movements like rolling, hanging on ledges, pushing/pulling and climbing.

Regrettably however, once you’ve made it past the first few screens on how to move through the game, you realize how awkward and stiff movement actually feels.  Button presses on both the keyboard and the controller feel unresponsive at times.  More often than not in Illusoria you need precise timing, fine mobility and careful attacks to move from one section to the next.  Not having reliable controls to make a targeted jump from a platform to a ledge, or roll away to dodge an enemy attack gets frustrating very quickly.  I unlocked the “100 Deaths” achievement within the first 20 minutes of gameplay. It’s unfortunate that I can’t easily distinguish whether Illusoria is actually a difficult game or if it’s made artificially difficult from the less than stellar controls. 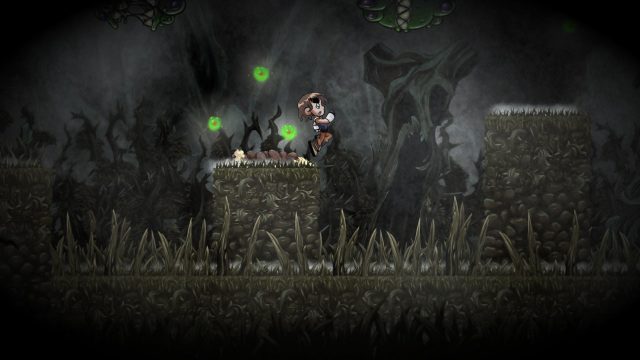 Combat in Illusoria is uncomplicated and familiar in many ways.  There is no health bar or damage meter.  Instead you are greeted by our old platformer friend, the one-hit kill.  Every enemy attack, every spike sticking out of the ground, every fall from too great a height is a once and done affair.  It certainly brings back memories of platform games from the 8 and 16 bit days.  To help you survive, you gain abilities along the way to help defeat the different plants, bugs and monsters you encounter on your journey.  The most effective is the fireball which can be hurled at the bad guys both on the ground and in the air.  Attacks with the fireball are unidirectional, going horizontally left or right.  Unlocking new abilities like the flame shield help, but are often forgotten because of the effectiveness of the fireball which contributes to make combat in Illusoria a little repetitive. 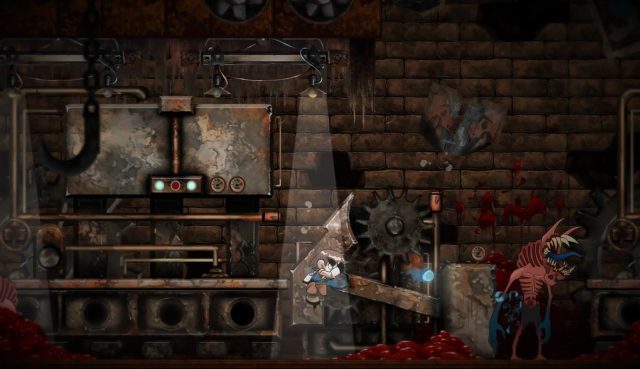 Illusoria does have some puzzle elements that help to vary the gameplay from the move here, kill this, jump there rut that it sometimes gets in. Activating certain monuments or finding switches to open doors adds another dimension, though only a small one, to the game that I desperately wish was more common.  It’s hit or miss with the puzzles as far as their frequency goes.  One entire area might have puzzles to solve and doors to unlock throughout the whole level, while another has none at all.  It is one of the redeeming factors in the gameplay that could have been fleshed out more to create a more consistent and satisfying gameplay experience.

Another infrequent but great quality about Illusoria is the exploration. The levels are littered here and there with hidden rooms that might have scrolls that give you a glimpse into the background of some of the characters that were in the crypts and forests before you. The developer did a good job of creating a sub story that compels players to want to know what happened to the NPCs you might never meet.  Each time you find a hidden area or break through a barrier you didn’t think you should have been able to, you get another piece of someone’s story you didn’t have before.  Going back to a level to find scrolls you might have missed does add a nice bit of replay value in what otherwise can be unforgivable situations that you might wish to avoid repeating. 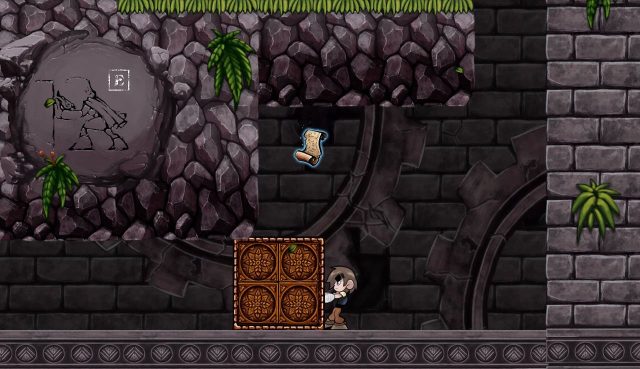 Illusoria is a game that has the heart and soul of an old school platformer, with a modern day twist to the difficulty as well as aesthetics.  The animation style of the game overall is simple yet has a lot going on that you might miss if you don’t stop to look around.  Though the game is a 2D platformer, certain aspects of the level design give it an almost 3D like feel.  Well placed columns in a building or trees in a forest add a component of depth to how you look at the level as well as an obstacle for you to get past as your character might be obstructed by one as you walk behind it.

Perhaps the most unique thing about Illusoria’s visuals are its death animations.  As crude or morbid as it may sound, it was one of my favorite parts.  Each death, whether it be from a fall, an environmental hazard or an enemy attack is hilariously animated.  This initially threw me for a loop because judging this book by it’s cover, it seems like a game geared more towards a younger crowd, but if the difficulty of the game doesn’t tell you to keep children away, the death sequences will.  They remind me of something from the minds behind Alien Homonid or Super Meat Boy. 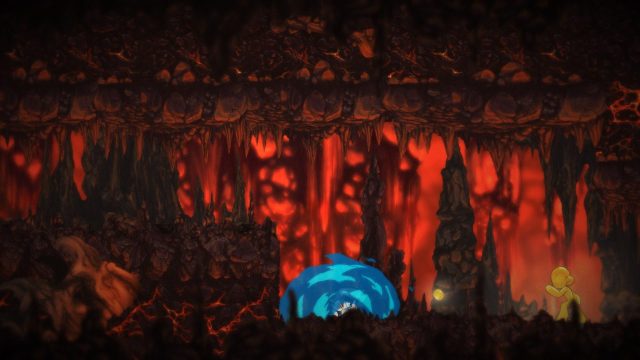 Sound design in Illusoria is clean and simple, much like the game itself.  Music accompanies the transitions between levels and dialogue sequences between you and the characters you meet.  It is reminiscent of a time when music production for video games wasn’t as complex and vast as it is today. Elegant and simple music goes with the menus, between levels and when the main story is happening. Intense heart pumping music gets you hyped for boss battles.  Background sound effects are audibly noticed when playing with headphones on but can sometimes be lost or drowned out when playing on smaller monitor or computer speakers.

6
Summary: Overall Illusoria is a game that can conjure up old memories of a genre that is underappreciated and often overlooked in today's modern video game landscape. Platform games can be tons of fun and can offer up a challenge that isn't as prevalent in more popular genres. Illusoria tries its best to capture the essence of platform games from the golden age and bring it today's audience with a contemporary flare, subtle storytelling and humor and wit where you least expect it to be. Sadly however the game falls short in some of the main places where it should shine. A good platformer needs good, reliable and responsive controls to make sure the user experience is as good as it can be. It is absolutely necessary. Having to navigate difficult obstacles, perilous surroundings and enemies that inflict one hit kills on you every time you misstep or over jump is frustrating, but can result in a rewarding and redeeming feeling when you prevail. Adding clunky movement and controls to the mix can wipe away any hope of that feeling of accomplishment. The aesthetics, nostalgia, visuals, music and background audio only go so far in covering Illusoria's shortcomings. At a price of $9.99 ($7.99 at time of review with the Steam sale) it should be reserved for fans of the genre who need a filler between games.
Story & Setting (6.5)
Gameplay (5)
Visual & Audio (7)
Replayability (6)
Pricepoint (7)