Welcome to another installment of a segment where we dive into one Elder Scrolls Online’s many Sets, and explore what sort of Builds you can make. Not only will we show you how to get the most from these Sets, but we’ll explain where to get them, what requirements there are to obtain them (if any), and everything else you could possibly want to know about them. In this article we will take a look at the Icy Conjuror Set which does Frost Damage over time upon applying  any minor debuff. 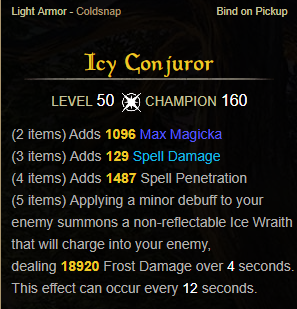 This set was added with the Wrathstone DLC which launches in February 2019 on PC and March on consoles. This DLC features new sets and two new Dungeons for players to take on, Frostvault and Depths of Malatar. The Icy Conjuror set drops from the Frostvault dungeon. Weapons and Jewelry only drop from the last Boss or Chests. This Light Armor Set comes in the Coldsnap Motif Style, which is currently not obtainable, but is expected to be added to the game in June.

Weapon and Armor Traits are random, meaning you are likely to have to farm pieces for different Traits. This is a Light Armor Set so enchantments on Armor and Weapon pieces are Max Magicka and Absorb Magicka. Jewelry comes with Arcane Traits and Magicka Recovery Enchantments. Keep in mind that you can use Transmutation to change Traits if you wish, however the Summerset expansion is needed to change Traits on Jewelry, along with 50 Transmute Crystals. 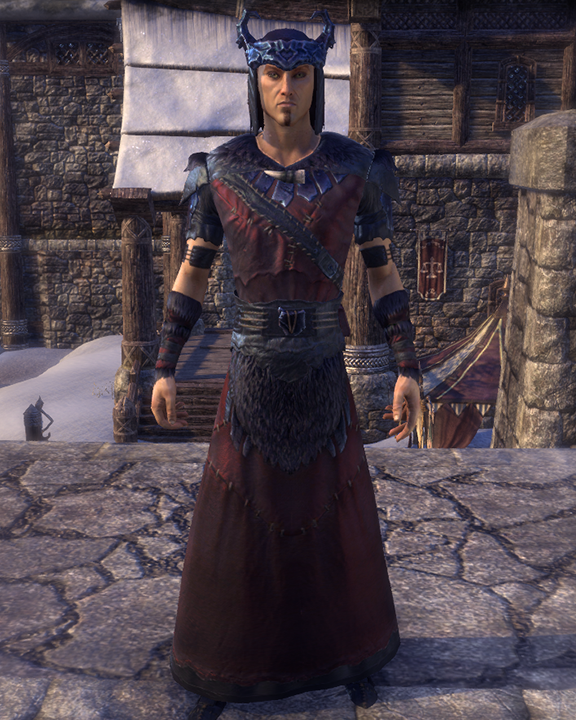 Icy Conjuror adds 1096 Magicka, 129 Spell Damage and 1487 Spell Penetration with 4 legendary pieces equipped. The 5 piece bonus summons a wraith that charges into an enemy dealing up to 19k damage over 4 seconds. This effect can occur every 12 seconds.

An important thing to note is that Proc Sets can no longer Critically Strike or Critically Heal as of Update 13 (Homestead) so as to reduce their effectiveness in Cyrodiil. In addition, many Proc Sets have cooldowns to keep them from being abused. When choosing a Proc Set to use, if you’re so inclined, you want to not only look at the effect, but how often you can apply it. Finding Sets with little or no cooldown is ideal, because it allows you to trigger them frequently. Icy Conjuror has a long cooldown, which isn’t ideal.

How this set works is whenever you put any Minor Status Effect on an enemy, an ice wraith will be summoned that does damage over 4 seconds. The cooldown is 12 seconds, so that means there is a downtime of 8 seconds. Tooltip damage can be increased to almost over 26k with 100 points into Thaumaturge and Elemental Expert Champion Skills, and since this is a Set, it cannot Critically Strike. The Set ticks every second and the Frost Damage DoT can proc other sets such as Stormfist. 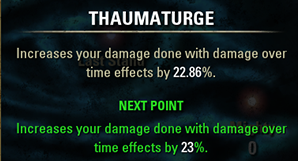 Minor Status Effects are the only type that can proc this set, and we are talking Minor Maim, Fracture, Breach etc. It has to say Minor (debuff) in the tooltip of the ability that you want to use. So debuffs such as reduced movement speed from Puncturing Sweep will not trigger this set, nor will any kind of Major debuff.

The effect of this set is easy to spot because an Ice Wraith is summoned and it strikes the enemy affected by the minor debuff. It is a single target attack that has no range limitation, and follows the target wherever it goes, regardless of elevation. If you are fighting multiple enemies at once, only one enemy can be affected. The Ice Wraith travels at a medium pace so it can be Dodged, but it is quite hard to do so if used from short or medium range. It can be purged as well but cannot be reflected.

One ability in particular works well with this set and that is Elemental Drain from the Destruction Staff Skill Line. Not only does it put Major Breach which reduces the target’s Spell Resistance, it also puts Minor Magickasteal, which restores Magicka every time you damage the target, while also triggering the Ice Wraith. Since only Magicka DPS will use this Set anyway, it makes it a fantastic combination. 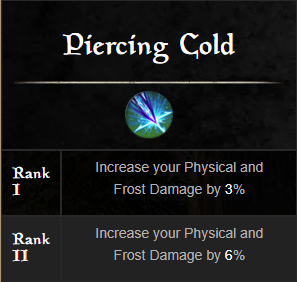 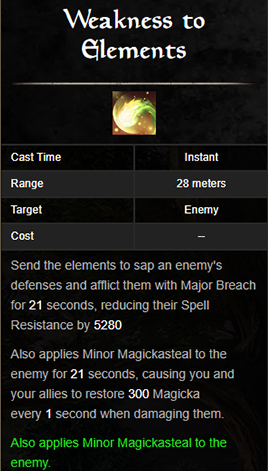 If you want to get the most damage out of this set, then Warden is best class choice because of their passive Piercing Cold. It increases Magic and Frost damage by 6% which adds up to 30k damage over 4 seconds, which is quite insane.

Icy Conjuror is a set for Magicka DPS builds only. It adds Magicka, Spell Damage, Spell Penetration and on top of that adds very high damage over 4 secs, which is what every Mag DPS would want. As mentioned above, using a Warden and/or Elemental Drain is the way to go for maximum impact. Elemental Drain needs to be recast in order to trigger the Ice Wraith again, however.

There are many sets that you can combine Icy Conjuror with to create effective Builds. Proc sets, Magicka restoration ones or direct damage increase, are all fine options and the final choice is up to you and your playstyle. Here are some you can use for each category: 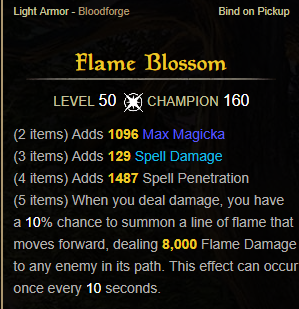 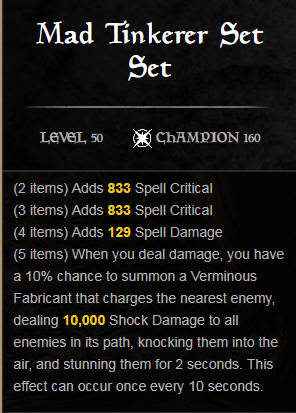 Magicka Sustain Sets: Here I would pick Shroud of the Lich, Vestments of the Warlock or Worm’s Raiment. All help with Magicka management tremendously. These sets should be used if you have trouble with Magicka sustain during your rotation, otherwise proc or direct damage increase sets are the way to go. 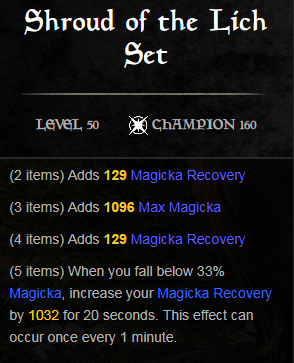 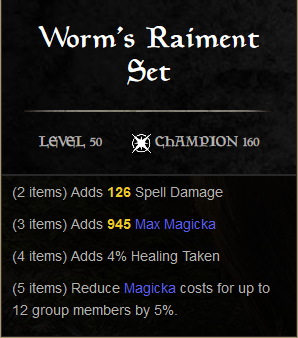 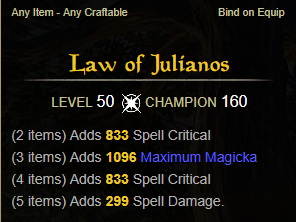 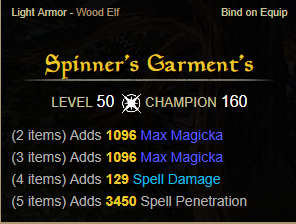 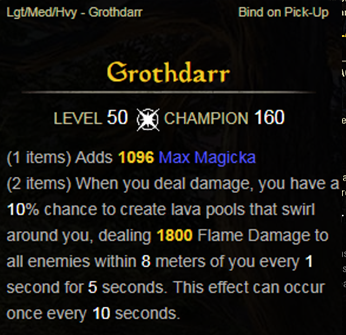 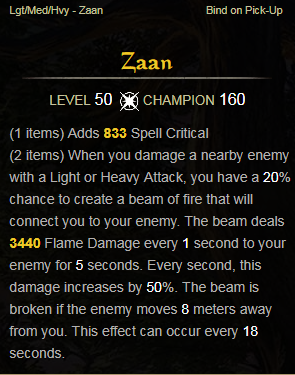 The only way to properly know if this set is actually worth using is by testing it on a Mag DPS build. In this case I was using a Templar with Mother’s Sorrow jewelry and weapons and the Slimecraw Monster Set to reduce RNG a bit. Only the second set was switched and all sets had Divines Traits. The goal was to test differences in the same environment to see how good Icy Conjuror was compared to other Mag DPS sets.

These results show that Icy Conjuror is on par with the best. Mad Tinkerer and Siroria are the only ones that outperformed others slightly. Also Mad Tinkerer’s proc goes in straight line and it can miss quite easily, while Icy Conjuror won’t miss in PvE since it follows the target. Overall, a great PvE set with no weaknesses.

Icy Conjuror has all the tools to be great in PvP. The Ice Wraith damage is devastating even with its damage reduced by half. Even though the Ice Wraith can be Dodged, it is not easy to do so if done from short to medium distance since it travels relatively quickly (from long range it is easy to Dodge). The great thing is that the damage done is only over 4 seconds, which is not a long time, making it very efficient for a DoT effect. 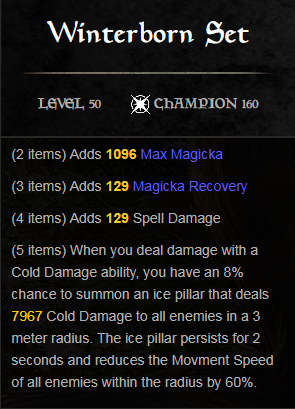 Winterborn + Icy Conjuror is a powerful combination in PvP

There are devastating combinations with this set for any PvP situation. Since the Frost Damage is quite significant, combining it with something like Zaan or Caluurion Legacy will make sure you will do a lot of damage from your Sets alone. Winterborn is another one that works great in PvP with Icy Conjuror since it has an 8% chance of slowing down enemies by 60% and deals decent damage as well. It can proc from Frost Damage of Icy Conjuror.

Icy Conjuror stacks up with the best in the DPS department and has great set bonuses on its own, giving it enough build versatility to be paired with different types of sets without having to stick to one or two to make the build work. It has a high amount of damage, the Ice Wraith follows its target everywhere, and it can proc some other proc sets. The only weaknesses are that the DoT can be Dodged or cleansed by other players. However, it is hard to Dodge at close to medium range, and not everyone can cleanse. 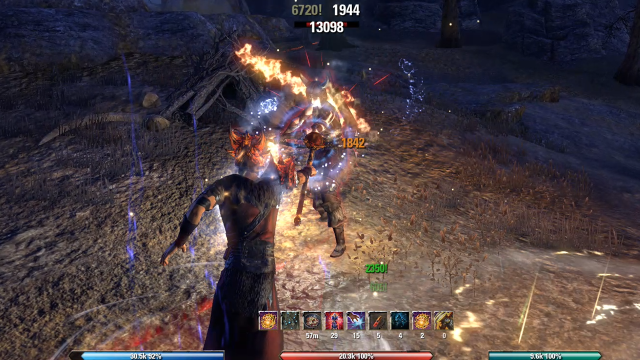 Great set for most situations

Overall it is a great set in both PvP and PvE. It has everything a Mag DPS would want and it is more effective in PvP than some other proc sets because it follows the target. Look no further if you are searching for nice DPS set that can stack up with the best of them.

Stay tuned as I’ll be covering more ESO Sets, and be sure to check out our Wrathstone Breakdown article, as well as the Future of ESO!