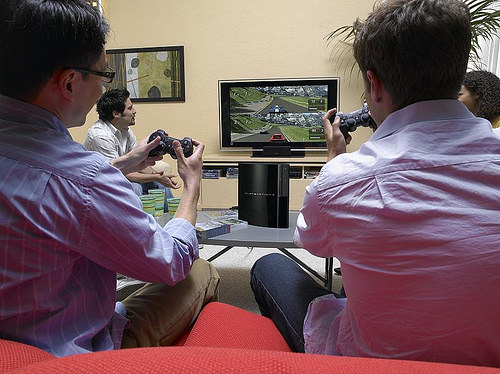 What does it all mean? Are games really undergoing a transition to become easy experiences with easy rewards and just tickle your brain into a dopamine high? Read on to find out. Part 1 here. You can continue to Part 3 here.

How to make the accessible hardcore game Part 2

So, given the previous definitions, what are the Fextra propositions for making an accessible hardcore game? A game that can convert players into community members, who can attract blue ocean dwellers to the comfy “core” shores? Of course one can not tell a studio how to run its business. But one can certainly warn a studio of what would ruin the business: taking your customers for granted.

Studios find and dedicate to satisfying one segment of the gaming market. Those aiming to satisfy everyone often find themselves with little sales because taking what makes a genre popular and changing it to try and appeal to the interest of those who “may” look this way is risky. If you create a fantastic puzzle game, the FPS crowd is likely out of your reach, no matter how many millions of them you think they are. Yes there are many very successful games based solely on the concept of a lended pay-to-win hand (such as Candy Crush), but those approaches will not run far with the “core” crowd. This concept of how that which works for one segment is unappealing for the other is unfortunately, hard to get through to higher organizational levels, who often ask “couldn’t we just make it more appealing to other audiences and retain our current customers”. Talks of revamps, rethinking, reboots and “freshness” come through, and you end up with another flop like DMC (budget aiming to sell 5 million, can’t make it to 1.5).

For the purpose of this article, we’ll take into account the progression of the Souls series, given their trademark challenge and recent comments of “accessibility”. Whether the propositions herein make it to the Dark Souls II release next March, we shall have to wait and see.

Demon’s Souls came at a strange time. Games haven’t in general gotten any simpler, but they have surely gotten more convenient. The evolution of save systems and progress mechanics had grown to accommodate the time of your play session and to give you options and opportunities to fix your mistakes. Some games challenged you by offering incentives for perfect clears, but overall sitting in 2007 one would have been content to finish the game, 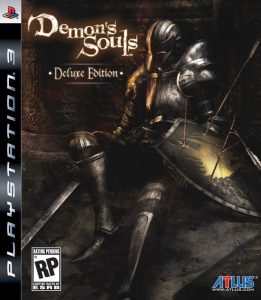 get to the goal, look for the next item in the backlog. There was also some convention of what sort of mechanisms would introduce you to the game. How the controls and progression would be made clear and seemingly how everything would have its own mini-tutorial, showing you how to achieve your goal. Such was the image of the need to be forgiving that Nintendo designed a system of walk-throughs that solved your game for you. You could literally watch a machine clear the level for you.

Not Demon’s Souls. From Software went stoic and old-school and decided to create an unforgiving world and purposefully not give you the manual. Originally backed by Sony, story has it the difficulty was perceived as such that the marketing team wanted to wash their hands off the product, cancelling global launch. Previews from western outlets paid no heed to this game and called it a “Devil May Cry clone”. And then, it launched. And it rocked the socks off the Japanese market. It became an underground cult and gaining surprising international following, creating a gray market of Japanese copies that sold for over 100USD at times. Atlus published in the US, Namco published for Europe, and Sony admitted they may have been wrong to think it too hardcore. Why did this game succeed? Because it was very challenging, but it was above anything fair:

Director Hidetaka Miyazaki was keen to share the five development concepts that are the backbone of the sequel, Dark Souls:

“We have five key criteria on which the difficulty level is judged. We want any player to be able to clear any obstacle simply by learning from mistakes and paying close attention. Then, the reasons for failure must always be clear and understandable. Every problem must have multiple solutions, so that players can tackle it whichever way they want. The game’s controls can never be a factor from which difficulty is derived. And finally, we want to make sure that there’s the possibility for miracles to happen; those magical moments that spread stories outside of the confines of the game world.”

It is clear that this game does not focus on failure but rather on the human approach to it. When faced with a challenge, when defeated, will you quit out in a rage or will you pause, consider your actions, and search for a solution? The latter will yield success as your reward. It is not about skill, it is not about finishing the level. It is about overcoming the challenge presented by the developers.

As Dark Souls 2 takes a change in the director seat, many fans have been alarmed by the comments:

“The reason why we used the word accessible was not to say that the game is going to be easier by any means. We’re maintaining the difficulty and we think the challenges are required. What we meant was, there are certain aspects of the game where it didn’t really have a direct connection to the sense of satisfaction of overcoming. There were things that were a little bit time consuming or a little bit tedious that we wanted to streamline – sort of carve away all the fat so we could really deliver the lean pure expression of what Dark Souls tries to communicate, which is the sense of satisfaction of overcoming. In terms of accessibility, what we meant was a more streamlined experience to deliver the more pure essence of Dark Souls.”

Can you really cut away the fat and keep the integrity of the sense of accomplishment? Would the game be the same without the “tediousness” of not having the ability to port from one bonfire to the next, or having only limited warping options? The simple answer, in keeping with our proposition of accessibility, is “no”

An often overlooked item on the game’s progression is its community evolution. Any community will reach a point were “old guard” are too entrenched and the new people feel left out. Newcomers covet the seniority of the “top” players. However, the gap to reach that level seems too wide, and thus shortcuts become the flavor of the day. Glitches become mainstream, exploits make it into everyone’s lists, guides detail mechanics on how to “easily” become the best. Parts of the community react with outrage: don’t cheapen my achievements! And the developers are left with a strange sense of disorientation as to who to listen to. Maybe the truth is in the middle? Maybe the new players and those who quit midway have a point regarding how some aspects were just too bothersome and didn’t really have a purpose… 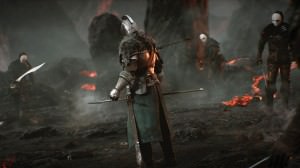 They do not. The annoying aspects of a successful game are still part of it. They are what the hardcore players pushed through to achieve a goal and what kept them going was knowing that they were going where others did not. The reason the game’s boards have half a million posts and that 739 days after release the online activity is still as high as day one: because the reward was worth all the pain. For people to reach their objectives of getting certain items, they would have to farm some enemies. They would have to travel through the same locations many times with “inconveniences” that forced them to learn the terrain, pay attention, and accept that it is the game who is in control of the rules, not them. Knowing that you did the grind is part of what brings that sense of accomplishment. When you remove the parts of the challenge that forced players to deal with “un-fun” items, you partially remove the challenge. An unpopular trophy that makes a Platinum very difficult and time consuming is part of what makes that Platinum desirable.

So if by our proposition the key to an accessible hardcore game is to have a straight forward setting and a fair challenge, but not cheapen achievement by streamlining the grind out and providing a cop-out for laziness, what should Dark Souls 2 do to achieve our goal of becoming an iconic hardcore game anyone can play? Read our next article to find out! You can continue to Part 3 here.

You can find the Souls series here.