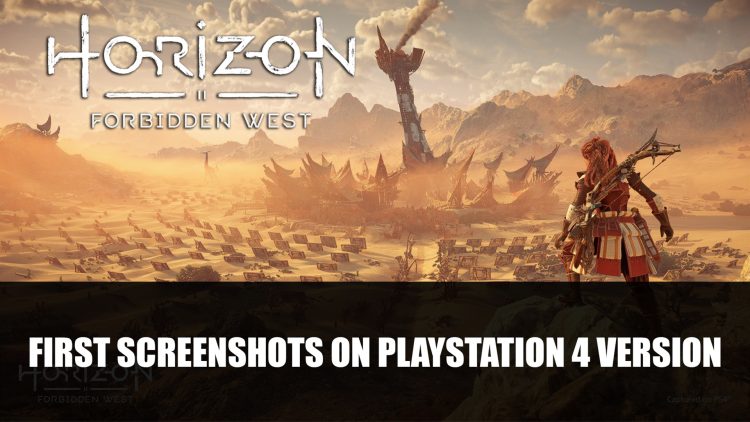 Upcoming Horizon Forbidden West gets first screenshots for Playstation 4 version of the game.

Developer Guerrilla Games has unveiled the first screenshots of the Playstation 4 version of Horizon Forbidden West, the upcoming sequel to Horizon Zero Dawn. We get a closer look at what it will look like running on the last-gen platform. While the game is coming to PS5, it’s interesting to see how the game will look and handle on PS4. The new screenshots show images captured in-game on a PS4.

We’ve showed you a lot of footage of #HorizonForbiddenWest on PS5 so far, but the game also looks – and plays – stunning on the PlayStation 4! pic.twitter.com/BuVga90W5L

The game still looks quite stunning on the last-gen console, however it doesn’t show whether this is on the PS4 Pro or base models. The proof will be in the pudding when we see some gameplay on PS4 to see how smoothly it will handle the open-world title. Of course, there will be some experience differences between the consoles such as PS5 gaining haptic feedback which utilises the DualSense wireless controller features, and the use of adaptive triggers. Then there’s the “virtually no loading screens” that the PS5 will have and course 60 fps in performance mode.

Previously Guerrilla shared new details about tools, weapons and climbing mechanics that are coming with Forbidden West. A new tool called the Pullcaster will allow players to grapple launch themselves and a Shieldwing, a glider type device will allow for some gliding in style.

Players will find some similar aspects to the prequel such as encountering dangerous enemies and machine enemy lifeforms, but there will be new challenges with new tribes. One of these hostile tribes has found a way to override the machines, using them in battle which will definitely make for more interesting combat with a combination of machine beast and humans.

Horizon Forbidden West is due out for PlayStation 5 and PlayStation 4 on February 18 th 2022.

For more news find it here in Undecember The Korean ARPG Gets Trailer And Gameplay Revealed and Reverie Knights Tactics Gets Launch Date Of January 25th 2022. Want to know which games won a Fexy this year? Check out our 2021 Fexy Awards – The Best Games Of 2021.