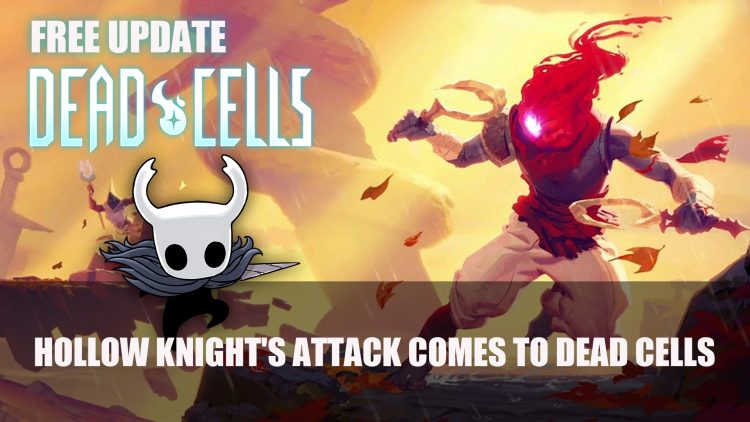 Developer Motion Twin have been teasing some additions that are coming to Dead Cells with the latest free update which includes Hollow Knight’s signature “pogo” jump.

A new free update comes to Dead Cells which brings the previously teased Hollow Knight crossover content to the game. A mechanic from Hollow Knight, the pogo jump will be available in Dead Cells on Monday 22nd November 2021.

From the latest tweet it previews the main character from Dead Cells jumping on enemies with Hollow Knight’s weapon, giving more options in the way you attack your foes.

You nailed it, Hollow Knight is our last guest! The Knight is a bit too shy to show his face. However he was still nice enough to let us use his weapon! And how cool is it to pogo on enemies?
Free Update 26: “Everyone is here!” will bounce this Monday! #deadcells #HollowKnight pic.twitter.com/78BZWHIvf4

Motion Twin has been teasing a number of crossovers with titles such as Blasphemous, Skul: The Hero Slayer, Curse of the Dead Gods, and even Guacamelee! In a video that was shared on the Motion Twin Twitter account, it shows a book that “tell the tales of heroes from other worlds. Some of its cryptic sentences seem to be providing clues”. If the crossover content for Hollow Knight is the use of the Hollow Knight‘s iconic move, it looks like we’ll be seeing similar from the other crossovers teased.

Hollow Knight made our Top 10 Metroidvanias To Play In 2021, alongside some other gems which you can check out here.

In case you missed the other friends teased by Motion Twin can be checked out  in the tweets below:

No sadistic teasing today, let’s directly make a toast to @BlasphemousGame! Trust us, you will love the Penitent and his mighty “reviving” bile flask. pic.twitter.com/FyaqwEgh95

Yup, @HeroSkul is about to storm into Dead Cells! pic.twitter.com/yEKgk5FoFl

It is @playdeadgods‘ turn to come-by soon in Dead Cells and he’ll bring his little friend: say hello to the first and only pistol in Dead Cells’ history! Thanks @PasstechGames! pic.twitter.com/yMyfNhA5Tw

Knock! Knock!
Some of you saw it coming: yes, the Drifter from @HeartMachineHQ will be soon in Dead Cells!
He’ll bring his sense of style plus, the first and only blaster in the game’s history!#deadcells #hyperlightdrifter pic.twitter.com/wtEAKPg5OV

It’s great to see so many crossovers coming, you can get the latest free update on Monday.

For a rundown of recent RPG news find it here in Top RPG News Of The Week: November 21st (Project Awakening, League Of Legends RPG Ruined King, Bloodlines 2 And More!)