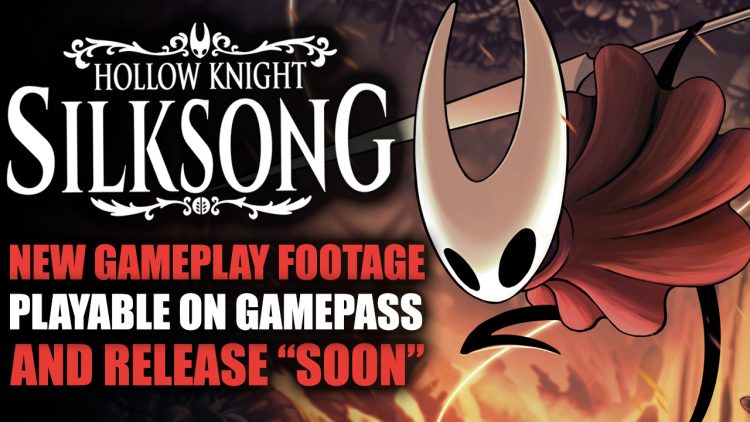 Hollow Knight: Silksong has been confirmed to be playable with Xbox Game Pass on the first day of its release within the next 12 months. Yes, you have heard it! The much-awaited sequel to the highly beloved Hollow Knight will finally be available soon.

Among the games featured in the Xbox & Bethesda Games Showcase is Redfall, As Dusk Falls, and Starfield, to name a few. But one of the event’s biggest highlights was the confirmation from Head of Xbox Creator Experience, Sarah Bond, that all of the titles presented here will be playable within the next 12 months, including Hollow Knight: Silksong.

There have been speculations that Silksong has been in development since 2019, 2 years after the release of Hollow Knight. Although not many updates were shared by Team Cherry since then, they did mention that more details about the sequel will be available soon as the game nears its release date. It was confirmed that Team Cherry was “hit hard” by the Pandemic and was probably the reason behind the extended radio silence. And then, this showcase happened.

Hollow Knight: Silksong quietly entered the stage as the second game of the showcase, right after Redfall. Tons of new gameplay was shown off starring Hornet. The game also exited the conference just as suddenly as it began, making fans want more.

Seeing the Princess Knight in All Her Glory

In Hollow Knight: Silksong, you play as Hallownest’s insectoid protector Hornet. She initially made her debut in the original Metroidvania as a boss. Rather than exploring the underground and its labyrinthine passages, you will have to ascend to the top of the new and mysterious haunted land of Pharloom after being captured. And just like before, you will encounter a large variety of creatures to slay such as beasts, knights, assassins, and of course, more bugs! 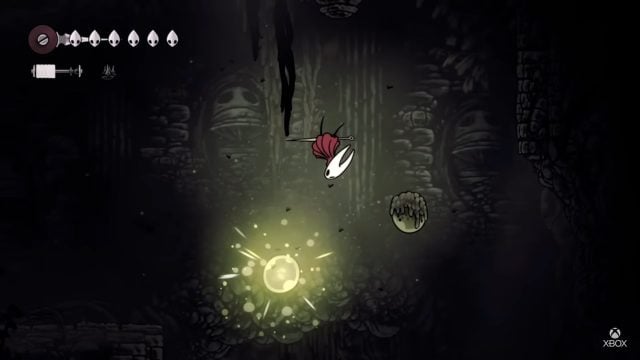 Traversing every part of this land will feel nostalgic as you reminisce about the events of yesteryear. In the new gameplay footage, you can see how Hornet uses her weapon to pierce green bulbs to hoist herself next to a wall. She then proceeds to perform a series of wall jumps. But traversal is not as simple as it seems. Hornet is met with a series of rotating blades accompanied by well-timed leaps to avoid meeting her demise. There are even familiar elevators like the ones we have ridden deep down within Hallownest.

Hornet also still retains much of her moveset and abilities from the first game. She will be able to make use of her quick and silky needle attacks. Even the annoying AoE move that sent silk threads spinning and cutting things all around her makes a return. She also retains her battle cries, which will make this game have 100% more grunts and yells from its protagonist than the predecessor. 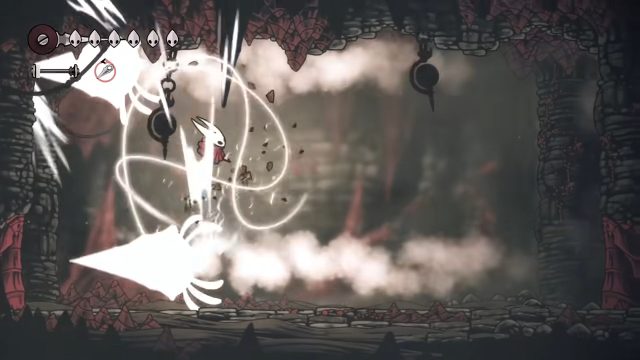 This next iteration not only looks much more fluid and polished, but also features unique-looking locations. There are a lot of engines at play that continues to create the atmosphere, depth, and complexity that fans have thoroughly enjoyed in Hollow Knight. It is also a visual and audio marvel. 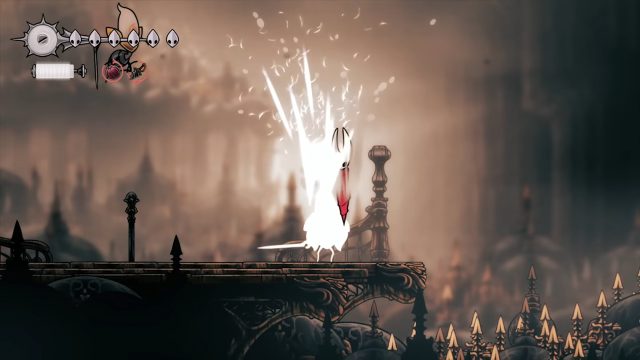 Drilling Down an Enemy

This is not much of a surprise considering that famed composer Christopher Larken came back to lend his musical expertise. Silksong is both old and new at the same time and in a good way.

Going on Hunts and Crafting Gear

Silksong will have you solve several quests divided into 4 categories – Hunt, Grand Hunt, Gather, and Wayfarer. Hunt requires you to go after specific groups of enemies and beasts while Grand Hunt presumably involves hunting down bosses. Meanwhile, Gather is about acquiring specific materials and loot, and Wayfarer possibly includes discovering specific points of interest that will move the narrative forward. 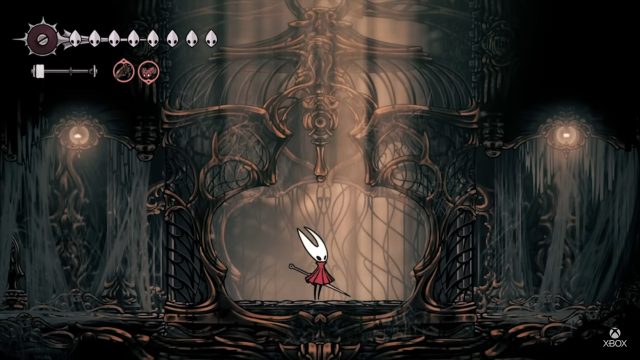 The new crafting system is another thing that makes the sequel different from its predecessor. Rather than collecting Charms and upgrading your weapon with the help of NPCs as in the original Hollow Knight, you can do it yourself thanks to a resource known as Shell Shards. Your tools like the pimpillo grenades and needles are also subject to repair so farming this new currency is a must. It seemingly appears in the upper lefthand corner of the screen, underneath your Silk for healing.

The Silk and the Bench

Instead of maintaining Souls, Hornet uses Silk. What’s interesting now is that she can instantly heal 3 masks while moving, without the need to stop and wait for a few seconds to do so. This is a major departure from Hollow Knight which allows for faster movement overall. The caveat to this new system, however, is that the entire Silk bar will be fully depleted. Moreover, rather than leaving behind a shadow of her former self upon death, a significant amount of Silk bundle will take its place. 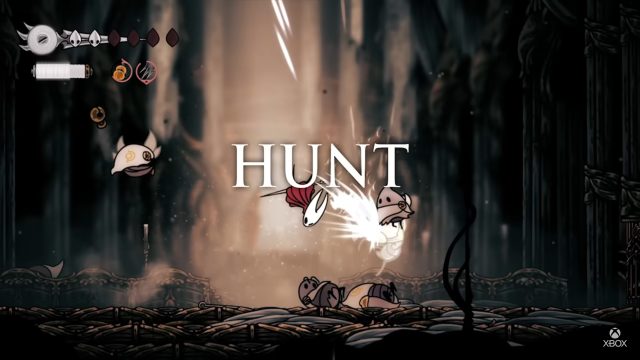 In terms of the bench or the rest point, this isn’t only used to replenish health and Silk as well as equip tools. But you will also use it to spend Shell Shards to repair and refill your tools.

After beating Hollow Knight: Silksong, you gain access to the permadeath mode known as Silk Soul. This is similar to the previous game’s Steel Soul Mode, which made the experience of exploring Hallownest that much more challenging. 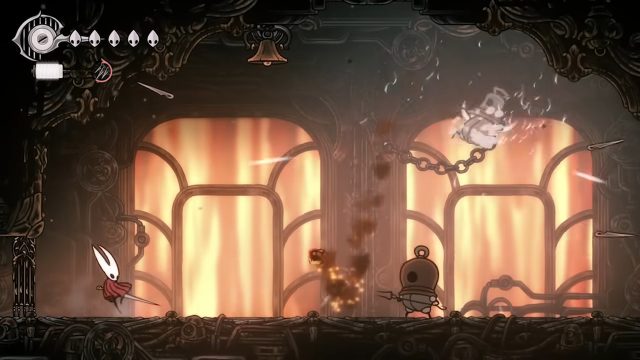 Although no new details have been revealed about it, you can expect a more colorful experience since it features more changes as Team Cherry has promised.

The Release of Hollow Knight: Silksong

Hollow Knight: Silksong is expected to release sometime in the next 12 months, as per Xbox’s conference. They even reiterated this fact in a Tweet sent out yesterday. It will be available on Windows, Xbox Consoles, and the Nintendo Switch.

Be sure to also check out our Hollow Knight: Silksong Wiki for more info on the game.

For more coverage on the Xbox & Bethesda Games Showcase, check out: