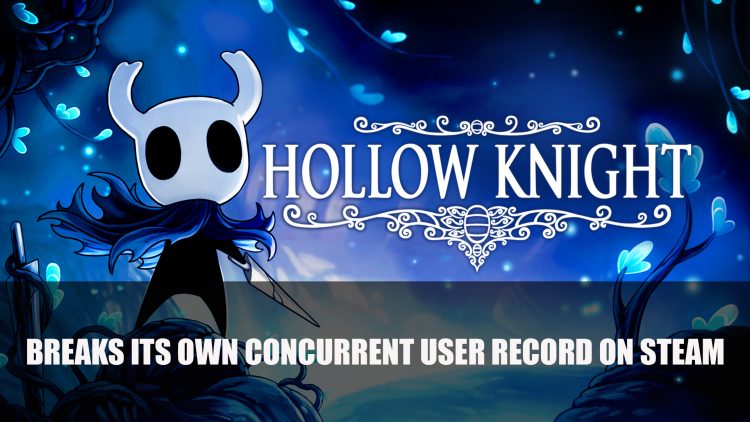 The metroidvania title Hollow Knight recently broke its own concurrent user record on PC about four years later after it original debut.

Hollow Knight Breaks Its Own Concurrent User Record on Steam

Hollow Knight recently managed to break its own concurrent user record on Steam, roughly four years later after its launch. The metroidvania game release back in February 2017, which took players on an adventure through a kingdom of insects. The well-received title won awards and the hearts of fans alike.

But strangely enough four years later Hollow Knight has broken a new milestone, securing a new all-time concurrent player peak on PC via Steam of over 12,000 players on August 5 – 12,891 according to SteamDB. Its previous high was just over 10,000 players.

New concurrent for 12,891 record via SteamDB

The exact reason for the new record is not exactly known. Usually when games gain a new resurgence of players or new concurrent record is due to news or rumours of a sequel. Hollow Knight has already got a sequel in the works by the name of Hollow Knight: Silksong which has already been revealed but has no release date as of yet. Silksong didn’t make an appearance at E3 2021, but does that mean we’ll be seeing more soon?

Still, the milestone is a great reason to celebrate this loveable metroidvania. If you want to know why it made out Top 10 Metroidvanias To Play In 2021, alongside some other gems you check it out here.

Hollow Knight is available on Playstation 4, Nintendo Switch, Xbox One and PC.