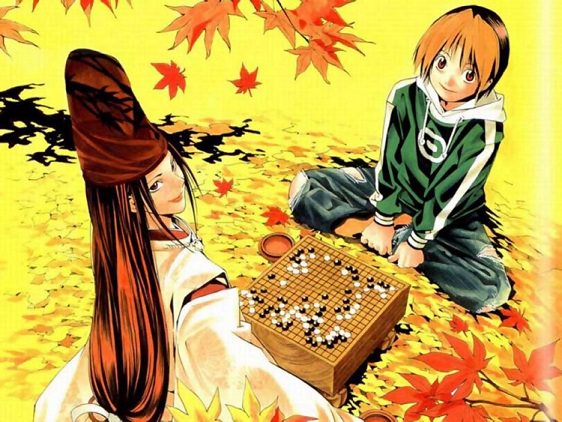 Anyone who’s seen anime has seen “that show.”  The show about a boy/young man who embarks on a journey of growth in a particular skill or field, facing stronger and stronger opponents on their way to become the best of the best (supernatural assistance in reaching that point incredibly common but generally optional).  It’s a tried and true formula that’s been around nearly as long as the medium itself.  The show I present to you today both is and isn’t that show.  Ladies and gentlemen, I present for your consideration; Hikaru no Go.

Shindou Hikaru is an uppity and brash kid who’s entering his last years of middle school and, after getting his allowance docked, decides it’s a good idea to raid his grandfather’s attic for valuables to pawn off.  He finds an antique Go board which would seem could fetch a pretty penny after it’s been cleaned up, however he can’t seem to get a certain stain to come out of the wood.  The stain isn’t all it appears to be though, as it turns out it’s the bloodstains of the spirit of a master Go player named Sai who was trapped in the board centuries ago and who can only be released by those who have the ability to see the seal that connects him to the board.  Sai starts haunting Hikaru’s mind urging Hikaru to play Go for him so that Sai might continue his journey to find “the hand of God,” otherwise known as the perfect move in a Go game.  However, Sai is a ghost and can only exist in someone else’s mind, so he needs his “host” to physically play the games for him.  While initially hesitant, Hikaru starts playing games for Sai and starts making unintentional impressions in the minds of actual professional Go players (“why is this grade-schooler who says he’s never played a game before showing master-level strategic play?).  Hikaru also starts to think that maybe he wants to try and play for himself rather than just keep letting Sai tell him how to play.

Will Sai ever play the hand of God?  Can Hikaru become a player in his own right?  Just how much of an impact did his first impressions have?  These are the main questions that the story handles.  Beyond that, there’s not much else it cares to delve into.  Once things get going the narrative is pretty consistently “Hikaru tries to get better at Go” with the only difference being the level of opponents he faces.  This one-note approach is rather typical of the Shounen genre though and, while shallow, this series handles it rather well.  Events flow smoothly from one occurrence to the next without making the series feel like it’s been divided into separate arcs and it makes Hikaru’s progression feel natural and fluid rather than growing in spurts ala Goku unveiling a new super move, or Yugi spontaneously topdecking the perfect card.

I should also mention that, while the show is about a rather esoteric high-strategy board game, it never makes you feel like you’re excluded from understanding what’s going on.  In other words: you don’t have to know anything about the game of Go to follow the series’s progression.  You could even use the series as a way to learn about the game yourself, since as Hikaru learns from the ground up you get introduced to concepts piece by piece as he learns them.  None of it is entirely unrealistic either, as they had a 7th Dan professional Go player actually assist in the writing of the story to make sure things were explained properly and the games played in the series were of appropriate level for where the characters were at even up to a professional level, something that would have been impossible had it just been the manga author by himself.  This level of detail, as well as just the story setting itself being a real-world environment and not some bombastic fantasy world, really set this series apart from other Shounens.

This is by and far the anime’s biggest strength.  It’s a show about playing a strategic board game, so outside of some flair added into mundane movements there really isn’t any action to speak of and the show derives all of its progression and intensity through how the characters interact with one another.  Without strong characters, everything else would fall apart.

Hikaru isn’t your typical Shounen protagonist.  He’s not shown to be the strongest in the world and he’s actually shown failing just as often as he’s shown succeeding.  He’s not infallible and that’s actually one of his biggest strengths as a character.  He gets better because he has drive and actual struggles to overcome, not through sheer virtue of being the main character.  Sai compliments Hikaru very well, as his story is basically happening in opposite of Hikaru.  Where Hikaru is a fresh face working towards entry into this world of Go, Sai starts out being shown to be invincible and through his relationship with Hikaru, Sai becomes more and more worldly.  Mention should also be made of a character named Touya Akira.  While not the only one, Touya is Hikaru’s first and biggest rival throughout the series.  Touya is a child prodigy at Go, having been playing the game since he was two years old and being taught by his father who is no less than the greatest Go player in the country.  He’s also the first person Hikaru accidentally beats while acting as a medium for Sai to play games, setting off all the repercussions and impressions among the professional Go players that help drive the story. Touya’s quest to discover just who or what Hikaru is, as well as Hikaru’s quest to prove to Touya that he himself rather than Sai is an opponent worth facing becomes one of the most in-depth character relationships in the series.  You’ll get to know several of Hikaru’s friends and rivals such as his middle school’s casual Go club buddies who act to drive Hikaru along and provide perspective to his growth. There are also the semi-professional Go-players-in-training, called Insei, who help keep Hikaru’s progress in check, and even some top level professional players taking notice of Hikaru’s strange level of growth and trying to unravel the mystery behind him.

As old as this series is, it’s rather difficult to appropriately judge the animation.  By today’s standards it’s certainly dated and outside of a few of those moments of flair I mentioned earlier can seem rather stiff.  However, compared to other shows of its time like Trigun, Cardcaptor Sakura, or Rurouni Kenshin, it nets about average in terms of quality.  Even if by these older standards Hikaru no Go is nothing mind-blowing, it looks solid enough and does what it needs to do.  Besides, given the rather action-less atmosphere of the series there really isn’t much need for the animation to stand out too much, as there’s no big-scale moments to capitalize on impressive visuals.

Following a trend common with older shows, the music is rather simple.  There aren’t too many tracks throughout the series, instead choosing to stick to a few stronger pieces for big moments rather than have a specific piece for every moment.  There’s enough there that it doesn’t feel truly repetitive though, and some of the more momentous pieces are something I still go back and listen to today.  The opening and ending themes are all rather catchy as well with two of them passing the “I still want to watch this rather than skip it” test.