The gaming world has seen a major shift with the current generation.  The days of old where gamers dined mostly on big budget AAA titles are no more.  The AAA titles are still here of course, but the bite sized indie scene has exploded. A newfound ease of entry into the development world has led to an unprecedented number of small studios diving in.  This climate of creativity has led to a myriad of new experiences.  However, if you ask Ninja Theory, they would say that this has led to gamers having a choice between AAA games with high production values, or small but creative titles where production suffers.  And precious little else in between. This development “no-man’s land” is where Ninja Theory is carving out their niche.  With their self made label of “Independent AAA” they aim to create a blend of a creative, small studio that won’t compromise on production.  Their upcoming title Hellblade: Senua’s Sacrifice is the end result of this vision.

Players will experience the world of Hellblade as Senua, a Celtic Warrior struggling with mental illness and the trauma of some recent carnage courtesy of a viking attack.  In all aspects of her particular reality, her worst fears have come to life.  From the word “go” every reveal has shown a character in deep anguish as she faces her unique living hell.  As Senua, the world may be more than a first glance suggests as visions and psychotic manifestations take control. 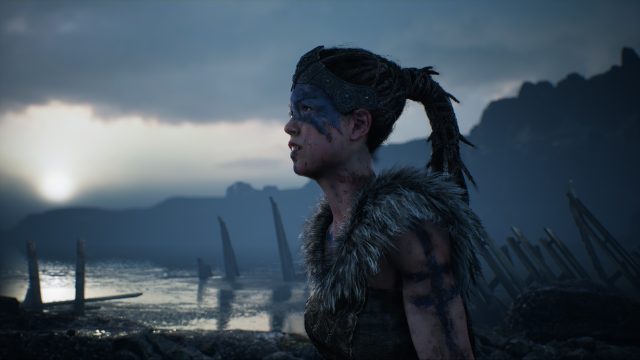 The environment helps weave Senua’s tale through pervasive reminders of chaos and destruction.  A raw elemental atmosphere is notable throughout released art and video.  Heavy doses of woodland areas have been shown with rain, falling leaves and perhaps the odd bit of ravenous flames.  Additionally, wind, sun and flickers of lightning are a few elements that breath further life into this digital realm.  The wreckage of viking ships and an ominous looking tower stand out in the imagery Ninja Theory has shared thus far.  Despite being obvious focal points, these reveals never feel out of place.  And you might have noticed the large tree engulfed in flames with corpses dangling from the branches in various promotional materials.  Players shouldn’t expect any of the above to remain completely static mind you. A key aspect of Senua’s world will always be what her psychosis brings to the table. A ripple of water, or a shift in the branches ahead could reveal a hidden countenance and maybe so much more. 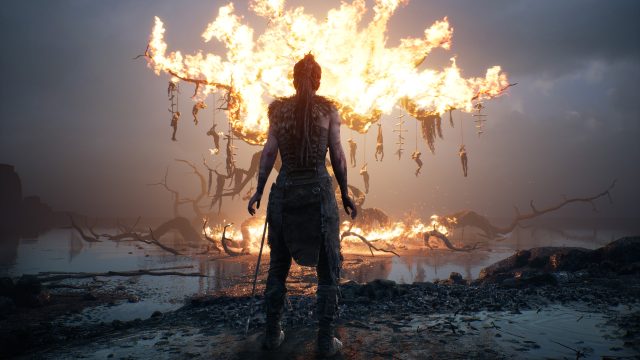 Antagonists follow suit with hellish designs inspired by a melding of real world inspiration and the haunted mind of Senua.  Soldiers with skull visages leer from concept art.  A giant beast whose exterior bears no small resemblance to a titanite slab towers over Senua in another (I probably won’t be trying to decipher the runes on this one). Brutes, apparitions and nightmares in between promise to populate the land/mind-scape of Senua’s world.

For anyone familiar with Ninja Theory, combat gameplay will look somewhat familiar.  An emphasis on fast and fluid attack animations lends itself to the label of “hack ‘n slash.” While this is a fair assessment to some degree, this label generally comes with a sub-context of “arcadey.”  In Hellblade, the extreme amount of detail in character and enemy design distances this game from the usual arcade look.  Creating further distance from the “arcade” label, developer diaries have a noted absence of aerial maneuvers from Senua. Overall, Hellblade seems to be promising a combat experience that supports the gravity of the protagonist’s grim existence.  Ninja Theory has characterized the Viking antagonists as larger and more powerful than Senua, who will rely on skill and cunning to persevere.  From what we’ve seen, Senua is typically the fastest thing on the screen with graceful (yet vicious) movements.  Enemies and their attacks often have a much greater feeling of weight, which is apparent when they (unfortunately) connect with Senua.  The term “bone crunching” is not only fitting, but quite nearly felt by the viewer. Don’t be alarmed by what sounds like a few changes when compared to past Ninja Theory titles. Diary videos show a robust moveset from Senua with variable tactics, counters and combos. 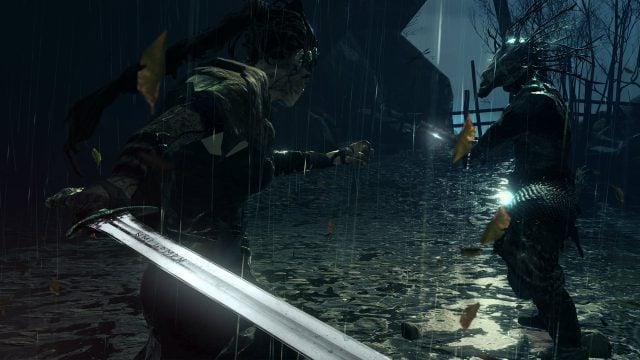 When the player isn’t busy fighting, exploration through Senua’s world takes center stage.  “Normal” navigation takes strange twists in Senua’s mind. Ninja Theory promises creative use of binaural sound (break out the headphones) and assures us “you’ll hear voices all around you.”  If you’ve delved into the development diary, you can find a spot promoting the use of sound and how it will be able to guide players as they move through space.  This is (coincidentally?) followed by a short scene of Senua navigating a rather dark area.  Hmmm… 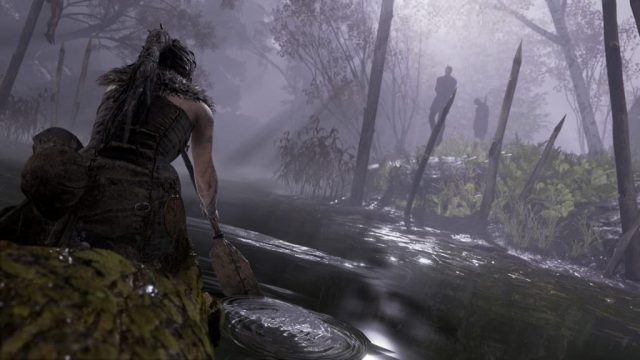 Ninja Theory is estimating a completion time of 6-8 hours.  A casual glance at any of their released materials however, shows the care and attention being poured into the title.  All things considered; while short, it may be a hell of a ride.  I would say that the aim is to provide quality over quantity.  Ninja Theory explains their philosophy on this best however:

Ninja Theory is defined by three things: ninja-class melee gameplay, strong character stories and a unique art vision.
On Hellblade, we will double down on what we do best to give you a deeper character in a twisted world with brutal, uncompromising, combat.
We are embracing the creative spirit that comes with independence without letting go of the stunning production values that we are known for. It’s not indie, it’s not AAA. This is a third way. its independent AAA.
It’s about making a more focused game experience that isn’t trying to be all things to all people but satisfies a particular gaming itch. It’s about being in command of our creativity so that we can give you what you want from us at a lower price.