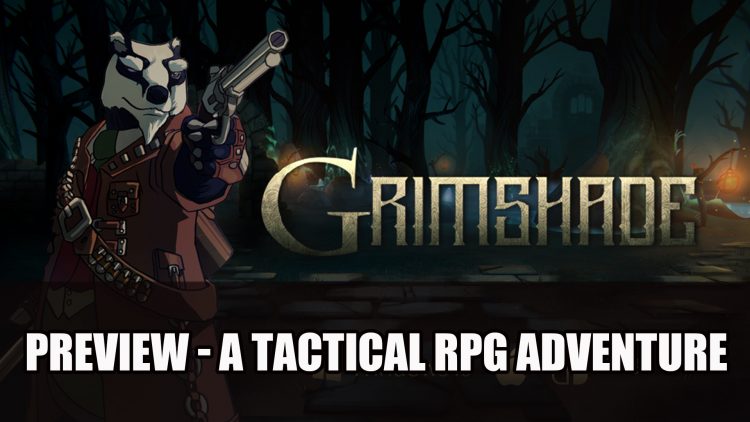 Talerock’s Grimshade is a story-driven RPG that provides tactical battles with turn-based mechanics set in a fantasy world where some animals walk upright and humans coexist in a universe together. Lead a group of adventurers in a journey through the world of Ree’Fah, where not all it’s inhabitants are so welcoming. The game is currently on Kickstarter with a goal of $100,000 USD and has surpassed their goal but still have further stretch goals to bring the game to further platforms. Let’s take a deeper look at how Grimshade takes into account different play styles when it comes to their game, as well as what makes it unique.

Grimshade takes place in the world of Ree’Fah, where after the Great Flood, it is split by the heirs of the Amon Darvish the Great. The Kingdom of Easeaon is divided into three separate states. The inhabitants of Ree’Fah, both liv and eleores, witness the dark age and spend years wandering the world to find a place of sanctuary away from the monster riddled lands of the Hardfore continent. All seems lost as technology, the legacy of the ancestors, secret knowledge of the natural world and ambitions for the future are forgotten in the battle to survive. A new society must learn to thrive on the ruins of the ancient cities, hostile wastelands and ominous mountain highlands. 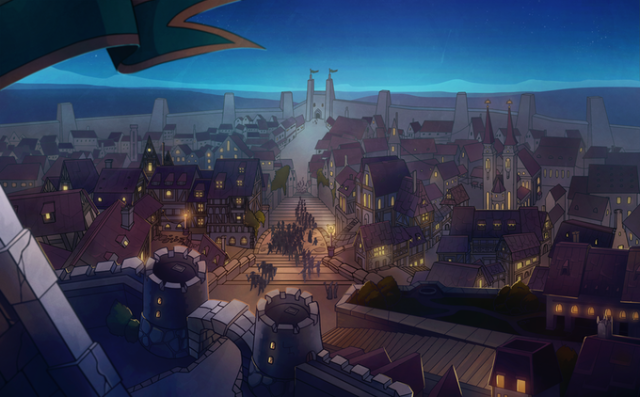 After eighty years have passed, the wounds of conflict start to heal and the people head down the path to prosperity. However, a new enemy has started gaining power, threatening the fragile society. 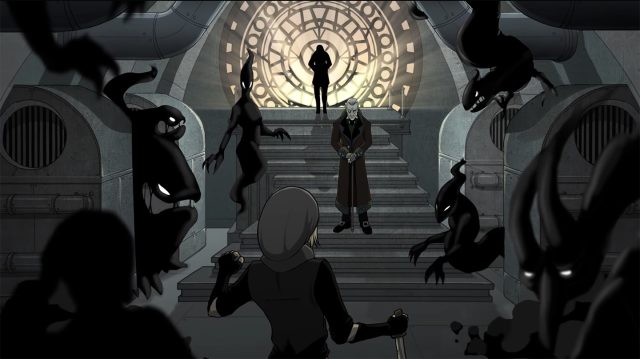 Grimshade is gameplay is divided into two different modes, adventure and combat. Adventure focuses more on the story line of the universe, while combat focuses on the tactical side of the gameplay. While some players will enjoy the adventure side of the gameplay others may wish to focus more on dungeons and unique quests that will test skill. 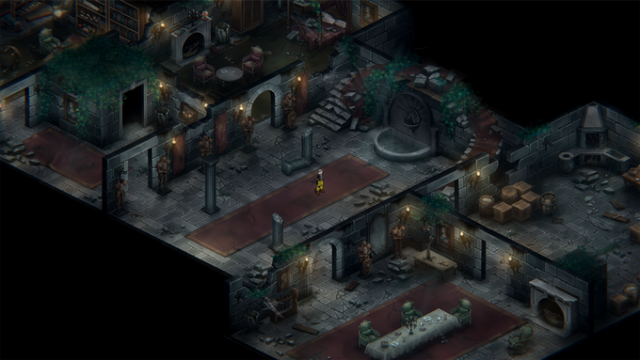 Adventure mode sets the player on a journey into the world of Ree’Fah, players will be able to progress into the storyline at their own pace. Throughout the journey, adventurers will meet different races, gain better equipment and meet an array of characters. Relationships with members of your party can be developed in this mode, and players will spend time getting to know them.

The explorable areas are inhabited by a diverse set of residents, each having their own story to tell. You can choose to spend time with the locals and learn about their culture, which in turn may provide something useful in your quest, or might unlock a whole new adventure entirely. Players can explore areas freely and decide on their own destinations, and whether to stay put or venture on to the nearest city is a choice left up to you. Complete side quests to discover the world further or test your strength by taking on dungeons. Find, trade or craft your equipment to help improve your characters and make them more versatile. You must prepare for the battles ahead by choosing the right tools. 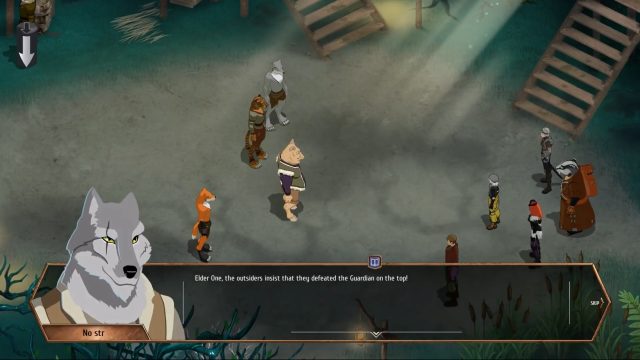 Players get to pick their team, choosing up to four members to be in their squad. Combat consists of two sides, each placed on opposite ends of the field. You must decide which moves each character should take and in what order, determining their outcome. The game focuses on positioning and awareness as priority for success, giving lesser importance to stat gains like in other turn-based RPGs. Battle scenarios are unique as each enemy have their own set of features, which makes fights diverse in nature, and players must use trial and error to find out which approach works best with different opponents.

Events within the game can lead to unexpected series of events, and you may find yourself in the precarious position of having to fight, whether you intended to or not. And, some areas of Grimshade contain special missions that include hostile dungeons, which require greater levels of skills and tactics. Boss’s require a high level of wit to defeat, and players must devise a strategy and prepare their squad in order to complete the dungeon, because doing so will result in great rewards. 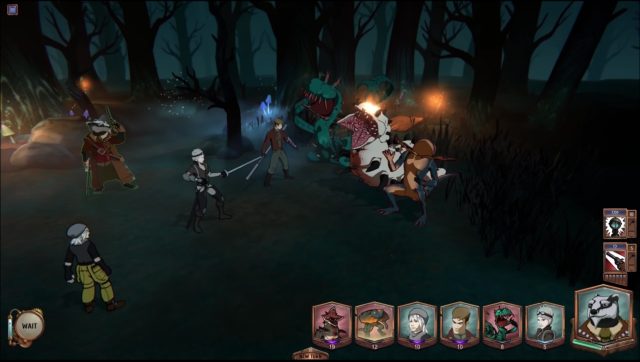 Talerock have aimed to add as much customization as possible by giving players an array of equipment and abilities. This allows the player to choose the right tools to suit a variety of different situations. Each character has the capacity of nine equipment slots, five slots are allocated for weapons/accessories that give combat skills and four for protective gear. 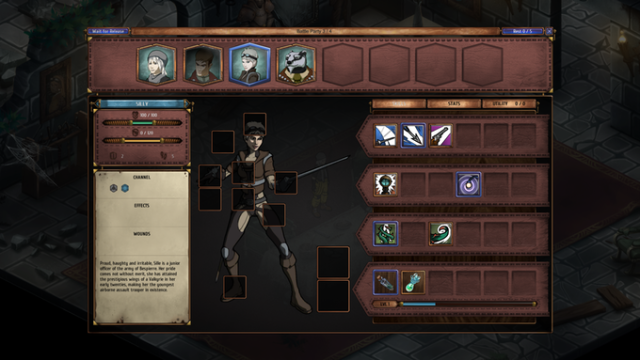 Offensive slots have no “vertical growth” meaning you cannot improve their abilities but you can switch them out for different situations. For example choosing a faster pistol for enemies on the smaller side or a more powerful pistol to face larger monsters that have armor that must be pierced in order to take damage. Gear is important as it will protect your character, but it also can affect a hero’s characteristics. Certain equipment can increase a character’s stats and in turn increase their survival rate. They also provide skill boosts and improve traits. Both gear and weaponry are crucial to the game, as they play a huge role in defeating a number of combat scenarios.

While Grimshade is a single-player game, a motley crew of heroes will be accompanying you on your travels. Advancing through the story unlocks six lead characters, each with their own class, personality, focus and backgrounds. Players can develop their skills and even the character’s relationships, however have no control on their focus as these are pre-set. Although characters have a “built-in” role, Grimshade provides versatility by enabling players to choose a variety of weapons/gear which changes the way the characters work. This means players are not locked down to specific roles or have to place their focus on improving a hero’s raw power (stats). 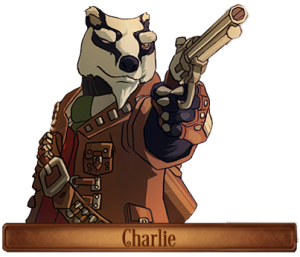 What he lacks in age, he makes up in a cheery disposition in both mind and spirit. His demeanor is thoughtful and quiet, but nothing escapes his attention. He is kind and responsive among friends. 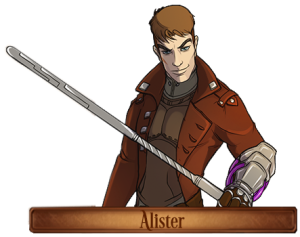 Alister is kind and sociable but slight naivety and appears as a narcissist. His dream is to live up to his father’s hopes for him and become a great warrior.

As a warrior, he can wield a pole and a pistol in battle. His glove is enchanted with magic, fed by a Dark Ether. 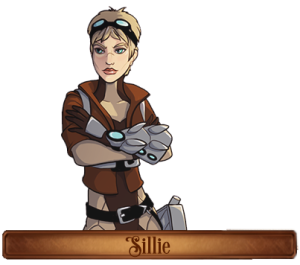 Sillie appears cold, prudent yet purposeful caused by injustice in her past. Having learnt the way of the world she is demanding of herself and others.

This Valkyrie is armed with a rapier and throwing pilums (a javelin type weapon) , bringing chaos in her wake. 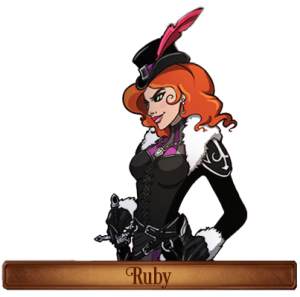 A fiery red head that is cunning like the devil. Her personality is absurd and full of sarcasm, but deep down she is a gentle soul.

Playing the role of assassin, she use dexterity to confuse her enemies to bring them down. Her amulet is the source of the her strength and protects her from curses.

The design of Grimshade is based on hand-drawn 2D characters, but are developed into 3D models in a painstakingly detailed 2D world. This gives the game a look similar to that of Zelda: Breath of the Wild where although characters are cartoon-like, still have a 3D appearance. Each character has their own features that make them charismatic and striking. For example Chaurlind’ah “Charlie” Glassington, is an anthropomorphic badger that can aptly hold a pistol and gives off an impression that he is not to be messed with. 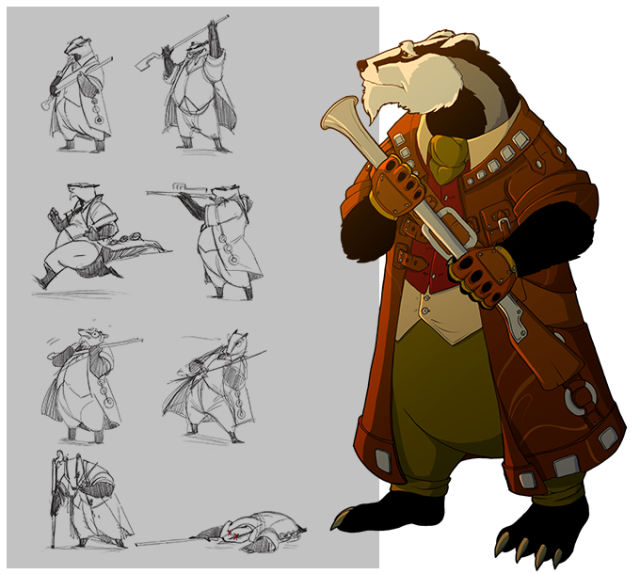 While the environments are bright and pleasant, the creatures that inhabit the areas are a stark contrast as they are somewhat grim and ferocious. Monsters are the main enemy, some bearing resemblance to real-life animals, while others are horrifying creatures that look like they have crawled out of someone’s nightmare. 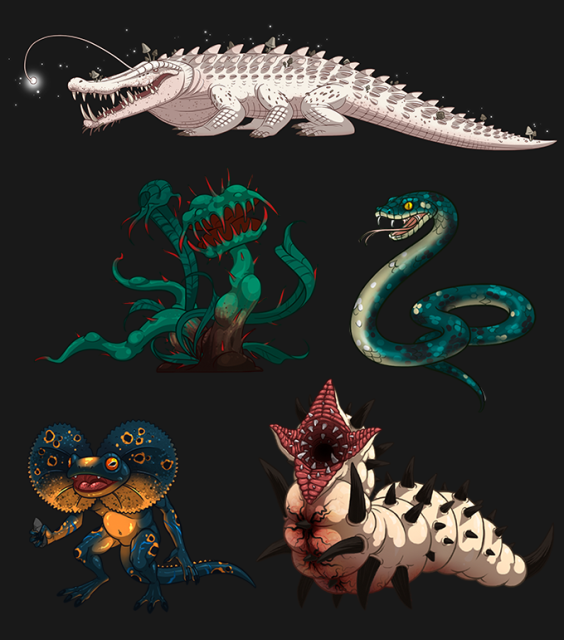 Music is melodic and classical in nature, supporting the immersive feel of the game. Using piano and synth effects, the composer Ivan Chimaer is able to transport players to the world of Ree’Fah has drawn inspiration for his compositions from the artwork.

Talerock sets out to make Grimshade stand out from other turn-based games in the same genre. Focusing on two modes, adventure and combat, gives players the option to either explore the world or go straight into battle, if that’s your preferred style. Turn-based games such as Octopath Traveller usually force players to take part in the storyline, although enjoyable for some, those who enjoy the tactical side of the game don’t generally get a say in the matter. While unlocking some characters will require some story progression, it is not completely tied to dungeons/battles. It is clear that Talerock has taken different types of players into account by offering two separate modes. 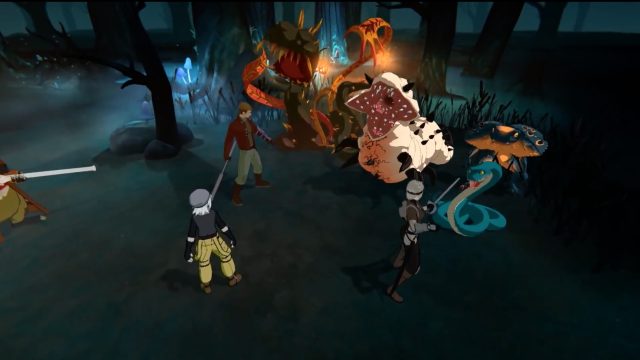 Battles are challenging as they mix things up by introducing enemies that possess unique abilities, which will constantly keep fights fresh, as players will need to learn to adapt to their new opponents. Adding to further challenge, the game offers optional quests that are more demanding, requiring a certain amount of preparation in order to successfully complete. As players vary in what they want out of a turn-based RPG, Talerock has sought to provide options that can please different playstyles.

As this is a Kickstarter project, at the beginning of it’s journey we are yet to be given a deeper look into the combat system of the game. Hopefully, as the game progresses Talerock will provide an equally intriguing battle system as they do with their beautiful fantasy world. Grimshade is looking for $100,000 USD in pledges and currently surpasses their goal, but still have further stretch goals to add a PS4 version and Xbox version of the game. As with all projects on Kickstarter, only those who reach their goal by their end of their campaign will receive funding. Their campaign only has a dat to go and ends June 22nd, 2018.

If you enjoyed this article be sure to check out more our previews in The Surge 2 Preview: Stronger, Faster, Character Creation! and Cyberpunk 2077 Preview: When Fallout Meets Blade Runner. For a rundown of the latest news read here in Top RPG News Of The Week: E3 2018 Sekiro, Fallout 76, Cyberpunk 2077 And More.