In this guide, I’ll give you some useful Grim Dawn tips to help you to play the game in a more efficient manner. Hopefully it’ll also make it a more enjoyable game for you.

Grim Dawn is an Action RPG that have been around since 2016, and with every update, DLC and expansion, it’s getting better and better. The next expansion, Forgotten Gods, was announced earlier this month, and is due to be released on Steam and GoG in second half of 2018.

The first expansion (released October, 2017) brought some interesting features like new classes and the entertaining Fashion Dawn. So I can’t wait to see what the Forgotten Gods have to add to the game next. But before we all get too excited about the future of Grim Dawn, I wish to share some few precious tips I’ve learned along my journey in Cairn that I wished I’d known them before I started playing.

I’ll split the tips into more than one article, to give some details on each part. 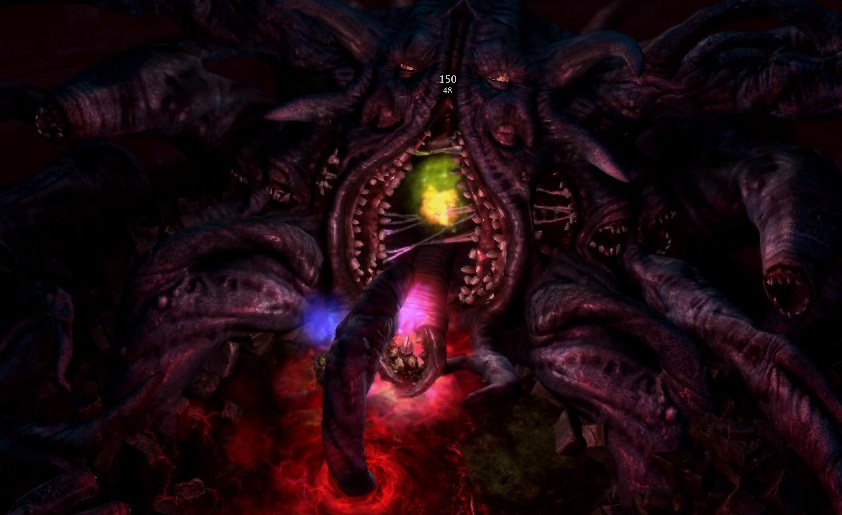 One: Attributes aren’t there to mess with:

The customization in Grim Dawn is immense. You can customize and tweak every aspect about your character, when you first level up, or later. You have the spiritual guide, an NPC who can reset your skill points and devotion points, so you can spend them elsewhere. All of your choices can be changed later in higher difficulties. Be it faction, or some random trader you murdered on the road, you have a second and third chance to rectify your choices.

It’s all designed to give you freedom, and encourage experimentation. Which means you can virtually go crazy and make what you like, and change it all later. And it’s true, but for one small tricky part: Attributes!

The problem: It’s very easy to develop the wrong attributes

You get one precious attribute point each level, which you can spend on Physique, Cunning, or Spirit. Attributes gives small bonus to damage, health, or mana, but their main value is being a requirement for armors and weapons.

That’s where it gets tricky, you are level 20, and you get a nice drop which makes you all excited, but sadly you can’t equip due to lack of Spirit, or Cunning. You level up, you immediately spend your point into Spirit or Cunning. Then it’s enough, so you level some more, and keep spending points this way until you able to wear it.

Then you spend one more hour, and your are level 30. Except now that awesome drop isn’t awesome anymore. By end game, you realize that attributes can’t be refunded and new gear needs different distribution. Regret doesn’t feel good, does it? The Solution: How to play safe with Attributes?

Your two classes increase your attributes passively, which get you the points required to equip things. It decreases the need to spread your attributes points around and gives you a better idea of where you really need to spend your points. So don’t rush maxing all skills, but instead increase mastery bar early on.

Plain and simple, Physique is the most important attribute. It not only gives flat numbers in health (which can be multiplied by various ways), but the best defensive armor requires so many points spent on Physique – maybe even All points in it.

If you – typically – spent all first 70 points in Physique, it’s probably wise to not spend the rest immediately. Leave the last ten or twenty points free until you get to Max level and have all the equipment you need. You might find a good accessory that needs five more spirit points or something.

Things like “Polished Emerald” , “Spellwoven Thread” , and “Vicious Jawbone” can be a source for some attributes early on. Even if they don’t give direct benefit to your build, using them for the stats is okay. You can see a full list of all components and what they do here.

Yes, the stars have attributes, and you might not need to go out of your way to get them! On the road to every major proc skill, you will find small boosts in attributes. You will grab these by default on the way, so don’t worry about changing anything for attributes.

Two: Build up your defenses properly:

No matter what level you are (beyond the first ten or twenty), you always need to prioritize defense. Yes, when I first heard this tip from professional players, I thought it sounded counter-productive, and boring, and that it would make progression slower. But having played this game over 400 hours, I can totally confirm the viability of the method.

The thing is: Grim Dawn is really grim. The enemies can be really weak on normal/Veteran, but become way stronger in Elite, and a total nightmare in Ultimate. Even in normal you can encounter some hard to pass encounters as a glass cannon. And if you can’t stand few hits, you will have to start running to escape, and will stop doing damage. While a good defense allow you to stand your ground for a bit, giving you better chance at finishing enemies before they finish you. 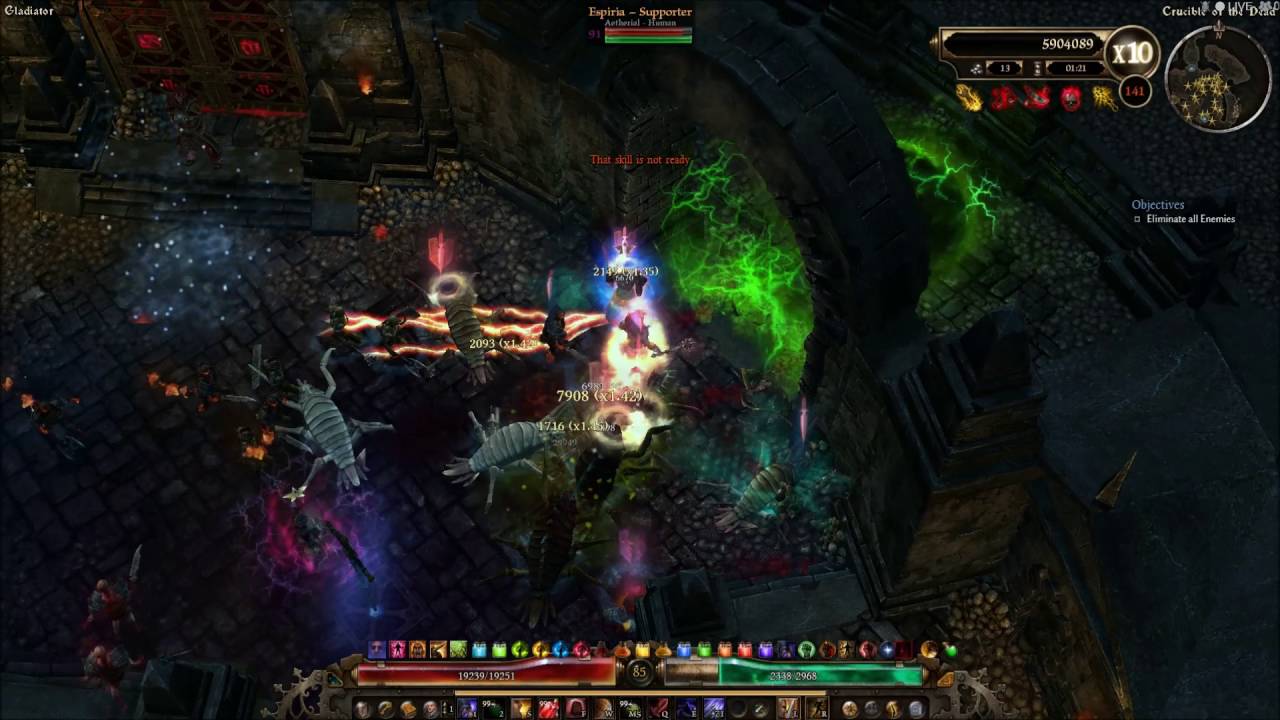 The solution: How to prioritize your defenses

There are many other sources of defense in Grim Dawn, but they are situational, and depends on build. Like Vitality damage builds, and retaliation builds, also solider shield builds are very strong and Crucible viable in general. But these are topics not for this article.

Three: Know what build you are doing

This one sounds basic stuff, but it could get very tricky. Grim Dawn is a rich world, with countless possibilities to replay the game and having different experience. Thus, the majority of the build guides out there are aimed towards experienced players, with long hours into the game, and decent stash of equipment ready to be used. In other words, many builds are gear dependent, which might not be friendly for beginners.

The matter is: If you don’t have the specific gear the build asks for, you either ask the guide writer to suggest you a beginner alternative, or don’t do this build. The drop rates in grim Dawn are very good, and you keep getting good items constantly as you play. But the loot tables are shared among all monsters in the world, meaning that anything can drop anything, and there are no specific spot to farm any item. The exception is some rare items called “Moster infrequents” or “MI”, which are moderately good items dropping from some specific bosses or monsters, and are okay for leveling, not top end game though.

It’s good on one side, as it make you keep playing the game, go wherever you like, and enjoy all the content without worrying about the drops, since what you get here would be the same as you got there. But it restrict you from planning top builds without before having the items required. It might be wiser to plan your second character based on what you already have from first playthrough, not on what you wish/expect to have.

This problem extend to the first playthrough, since you have nothing to start with. Well, not “nothing” , since the faction gear can be excellent choices for some builds, best in slot even. These faction gear require some effort to get, but it’s fun and very rewarding to do.

These are some quick concepts of varied basic builds in Vanilla to look forward. But notice that you don’t have to follow any of these suggestions, you can actually start the game and level with one mastery through the normal difficulty, then depends on your taste, decide where to go from there. Adding another mastery depends on your direction, or respec to another build entirely, Grim Dawn is flexible like this. These guidelines are only for those who don’t like to feel overwhelmed by the amount of customizations the game have.

Four: Learn how to craft, and what to craft:

And be patient for the recipes as they come one by one. Really, crafting a strong aspect of the game, that keep giving you candy along the way, but only gets to its full potential after hundreds of hours of gameplay. You can craft so many things. For example, consumables, powerful Mythical Relics, parts of legendary items sets and the most important components. 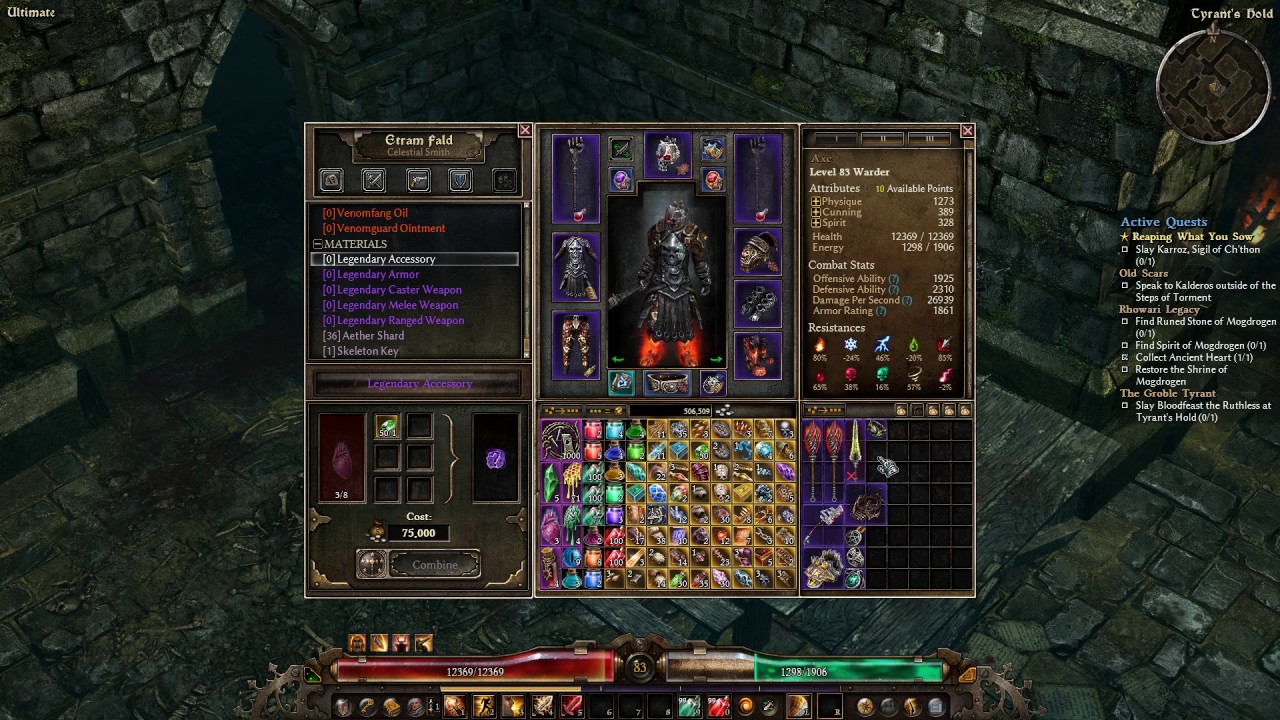 Saving the rare materials required for materials is crucial, as these are drops only, and not sold by any merchant (they can be exchanged for one another in act Four though). Things like Tainted Brain Matter, and Ancient heart and the like are precious little things, so use them wisely.

Don’t be afraid of trying to craft basic gear though; the items with question marks in the default menu of the blacksmith, named Enchanted Mace and Enchanted Boots. These are not strictly “magic” items. The crafting can give you rares and scales up with your level. You can actually get some solid gear from them to cover any weakness your character have. You just need scraps and gold, and some courage to go through the randomization.

I hope that you liked this article. If so, you could read Grim Dawn – A Detailed Analysis next. Alternatively, you could read Divinity Original Sin 2 Builds: Eternal Warrior.