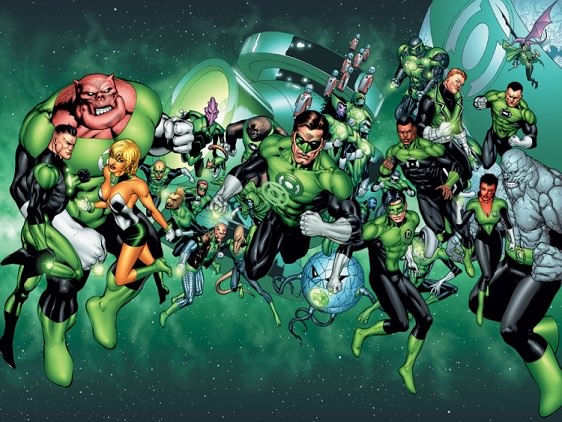 I love comics and have since I was young, thanks to an encouraging uncle and parents who saw the literary merit in comics, even if they did not entirely get the medium.  Making my way to the local comic store to pick up the current issues from my pull list was a day I looked forward to each week.  Holding that stack of comics and the anticipation of the next few hours of reading put me at ease in a way few pastimes ever have.  As I’ve gotten older however, it has become impractical to my clock and wallet (and tragic to my geek soul) to maintain a long pull list of titles.  The inevitable tolling of the iron bell happened and I was forced to trade collection of comics for collection of responsibilities.

But nay,  I will not be denied completely!  I can parse it down to one title can I not?  Surely I can spare some of my coin for one ray of light?  Indeed.  But which title do I retain?  (Besides Batman, because it’s a given that everyone including non-comics fans should be reading that.  But Batman is already woven into my food budget so that’s not to be addressed here.)  If I could read no other title, what would it be?

So you were expecting a lengthy deliberation were you not?  Pffft.  Easy choice is easy.  Green Lantern in a palpitating heart beat.  That title has actuated my geek sensor more than…to be honest, any relevant analogies would descend us into some endless rabbit hole of geek references.  So more pressing is, what separates this title from the countless others out there?  That I can answer too.  For me it comes down to three major elements: Setting, Lore, and the Protagonist.

SPACE!  One of the biggest elements that sets the Green Lantern world apart from other titles is how much time is spent on space.  The basic premise of the series is that the Green Lanterns are an ancient order of intergalactic police officers created by an ancient race of beings known as the Guardians, and powered by a ring that channels the green energy of willpower.  The known universe is divided into 3600 sectors with 2 assigned patrolling individuals per sector.  That’s right, there are over 7000 Lanterns and they are all in charge of cruising the cosmos to ensure no evil goes unchecked.  That means aliens, and lots of them.  The lanterns and the planets they protect represent a voluminous amount of different alien races that possess all the differences one would expect from an interplanetary series like Star Wars or Star Trek.  There are lush planets, desolate ones, weird and quirky ones with equally diverse and interesting inhabitants.  It makes for great storytelling and nearly limitless variety as differences and commonalities can be explored.  With different and sometimes advanced technologies at play, there is a decent amount of sci-fi here, though not as robust as warp drive schematics.  I would say it’s closer to Star Wars in that the focus is on culture and action, and the action is so redeeming that it often makes up for a weak story arc.  Who doesn’t love a huge battle in space?

If you are into color theory, this is the series for you.  If you like Skittles, then come aboard.  Every color of the light spectrum is represented here, with each color corresponding to a specific emotional energy.  Some are cliched of course, but this is comics which are descendants of pulp novels, so we can allow for that.  Red for rage, orange for avarice, yellow for fear, green for will, blue for hope, indigo for compassion and violet for love.  Black and White are also represented in more dramatic alpha and omega fashion, but the aforementioned colors are persistent forces that have devout soldiers.  Long story short, the cosmic forces that are the genesis of these energies are spread throughout the universe, and discovered and harnessed for both ill and good.  Colors balance others, some negate others as blue does to red, some augment as blue does to green, and some are critical weaknesses as yellow is to green.   As the center of the spectrum the Green Lanterns represent the cosmic balance between the selfish and selfless and are emotionally positioned to be the best arbiters of conflict, and therefore their self appointed designation as peacekeepers.  Where the story digs deepest is when it mines out the sordid underbelly of politics, and exposes the complexities of organization.  There is a lot of infighting among the Green Lanterns over their methods, morals, and duties and the friction results in plenty of internal schisms and splintering.

Anyone can be a Green Lantern.  And that is the beauty.  The green power ring is the most powerful weapon in the universe and the wielder is only required to be capable of great willpower.  No in born powers needed, any human, alien, sentient planet (yes sentient PLANET) can become a Green Lantern.  When the time comes via death or discharge for a replacement, the ring of that sector scans for a nearby replacement capable of filling that role.  Earth’s space sector has had several Green Lanterns over the years alien and human, and humans represent a plucky yet more lesser regarded race in the cosmic view.  I’ve always been drawn to characters stories like this, because these are ordinary people thrown into extraordinary circumstances and, as in real life, greatness is often just a motivated person given the perfect opportunity to achieve.  We’ve had pilots, soldiers, football players, and artists all take on the role, and the constructs they create from their power rings often pay homage to their passions.  Hal Jordan, a pilot, is fond of creating planes.  John Stewart, an architect, creates elaborate constructs of schematics.  This imaginative approach to wielding power gives the series a substance, personality, connection and wish fulfillment, as the characters on not just firing straight-line beams from their rings and instead are fighting with the very passions that stir their souls.

If you are looking to get into comics for the first time, or if you are a veteran who needs a new title, I can think of no better recommendation than the Green Lantern.  It comes highly geek approved and even at its low points, of which every comic experiences, the backdrop of a space opus carries you through.  DC just rebooted all their titles recently so it’s not too late to jump on to a mostly fresh story.  I highly recommend Geoff John’s recent run starting with Origins and Rebirth, and both those mini collections can be found on our Wiki shop.