In this Godfall Review we will be discussing the new Hack and Slash, Action-RPG title developed by Counterplay Games and published by Gearbox Publishing.

Godfall is an action packed third person game that puts its own spin on some cool features from other games such as Exploration, Hunting Missions and some Rogue-like elements.

You play in the world of Aperion, a futuristic earth divided into three realms: Earth, Water and Air. You play as Orin, one of the few remaining Valorian knights, masters of combat equipped with legendary armor called Valorplates. 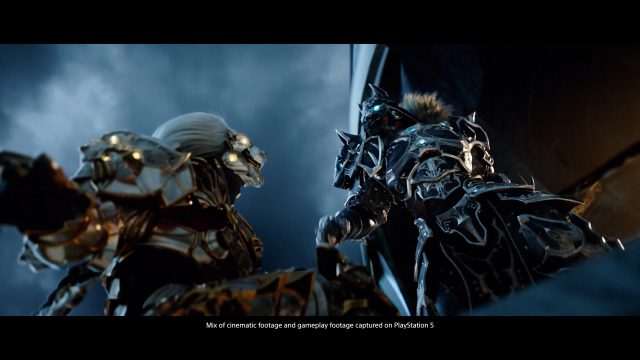 In the starting cinematic you learn that your brother, Macros, betrayed the Valorian Knights for his own self interest, and by doing so, endangered the whole world of Aperion. Now, you embark on a quest to stop your brother and save the World from an imminent apocalypse.

The story itself is very simple and very straight forward, and Godfall does not have a particularly strong narrative whatsoever. However, I think this was likely somewhat intentional to provide a faster pace to the game, and to keep players focused on what really matters in these sorts of game: combat and loot. There are only two NPCs that you talk to during your playthrough, and their conversations are usually straight and to the point, further reinforcing this. 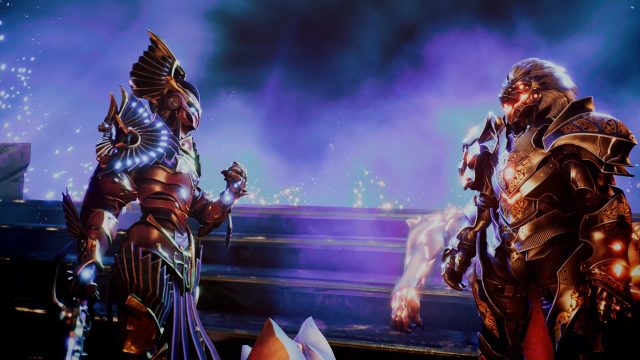 I liked how the story aspect of the game was handled, since I think this game is all about the hack and slash and the story is just there to provide a meaning to your actions. Still, for those of you interested in the world of Aperion, there are Lore pieces that can be picked up in each realm providing information about the game world, factions and characters.

Being a Hack and Slash game, Godfall is all about its gameplay which means killing enemies and acquiring loot, and it does a pretty good job in both aspects.

When it comes to combat, you really feel like you are dominating the battlefield. Combat is fast and most of the time you are taking the offensive making you feel like an unstoppable force, which is very rewarding. 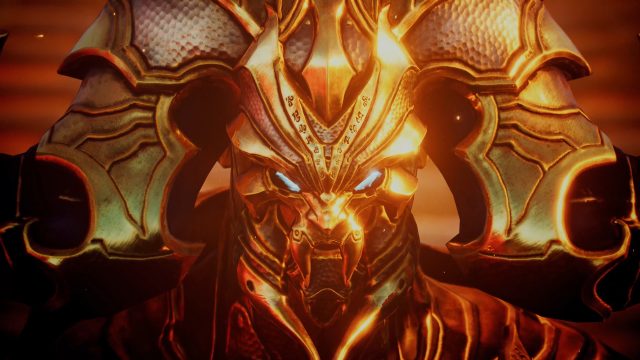 Elite enemies and Bosses has special attacks and these will glow either red or blue when they are about to perform them, allowing you to dodge or parry to counter leaving your enemies vulnerable.

Each Weapon has its own playstyle, including distinctive movesets and techniques, which are arguably the best part of the game. I tried all the weapons during my playthrough and I was really pleased on how different they feel, even if they are a bit lacking overall in the amount of things you can do.

You carry two weapons and you can quickly swap them in the middle of combat. This is encouraged even by the Polarity Attack skill which produces an AoE when swapping, and increases your damage. In most games I often use only 1 weapon, even if I’m provided with more choices, but in this case I found myself swapping a lot in the middle of combat swinging from one style to another one which felt very fresh.

When it comes to Equipment and Valorplates, I have some mixed feelings. First, I really like how the Skill and Equipment progression system works, but I feel that Valorplates could have been better introduced into the game. 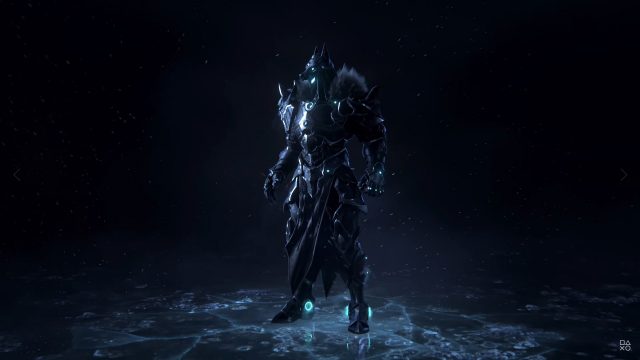 For example the Moebius Valorplate increases your chance to inflict Curse by 10% and when you use the Archon Fury it is further increased by 90% as well as increasing the damage to cursed enemies by 100%. This ties the Valorplate to a very specific build or playstyle, and you will often end up selecting a Valorplate only because it fits into your playstye. I think that some more customization or a progression System for Valorplates would have added a lot variety to the game and would encourage players to swap and try different ones despite of their build. 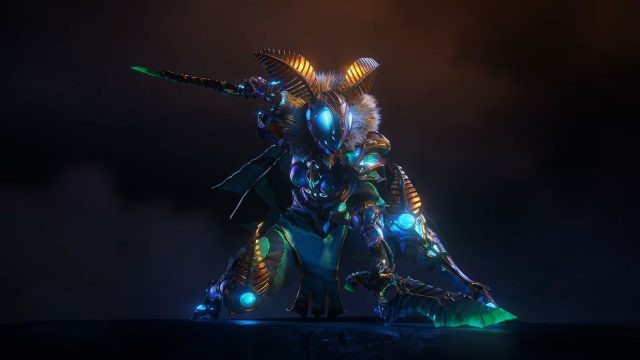 The rest of your equipment is highly tied to the loot system. All the equipment can be swapped at any given time. All equipment has a primary stat that is fixed for that particular Weapon, Ring or Charm, but everything else is completely randomized. This means that during your first playthrough you will be swapping equipment very often to match the loot you are currently finding which is very fun and stimulates you to keep searching for new gear keeping you wondering what new effects you will find and how it will change your build. At endgame you will try to make a build around Primary stats and then keep searching for the same piece while praying to RNGesus that you are given your desired effects for the Secondary Stats.

As for Skills, you will get 1 Skill Point for each level, and you will get additional Skill Points for completing some missions. Players can re-spec their skills at any given time, allowing you to try out different builds or to change just before a bossfight.

Provided how flexible the system is, I can’t understand why Counterplay went for such a forced approach with the Valorplates. You are constantly being encouraged to change your build and try out new things by swapping you Skills and equipment at any given moment, but you are forced to stay with the Valorplate unless you return to your base, and the stats on them are fixed.

One thing I really like about Godfall is how well it can adapt to how you want to play it. The system reminds me a lot of Monster Hunter World, where you go to a Location to perform a task, and you can decide to get straight into it, or take your time while exploring and collecting things.

For example you take a hunting mission to take down a Mini-Boss. When you start, you can either go straight to the mini-boss, defeat it and take a new mission, or take your time to defeat all the regular enemies, explore the area and complete puzzles to earn more rewards. 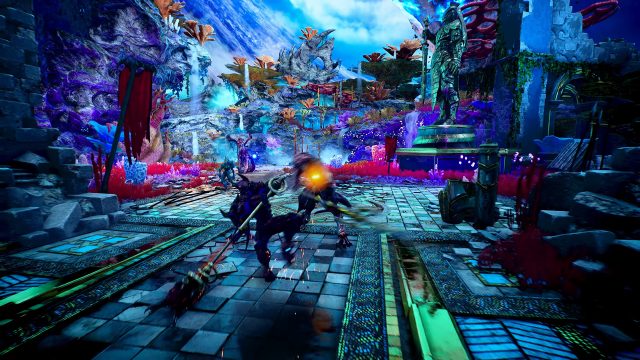 Each Realm (Earth, Water and Air), has its own distinctive map and you will be playing all the missions of that realm in that map. This however doesn’t make it feel repetitive or boring as the loot distribution and enemies change depending on the mission.

This is the feature that I liked most of Godfall, because of the flexibility that is granted to the player. Are you short on time and you want to play something quick? Load up a couple of hunting missions and go straight for the prize. Do you feel like exploring and enjoying the great graphics? Take your time while exploring and solving the different puzzles. 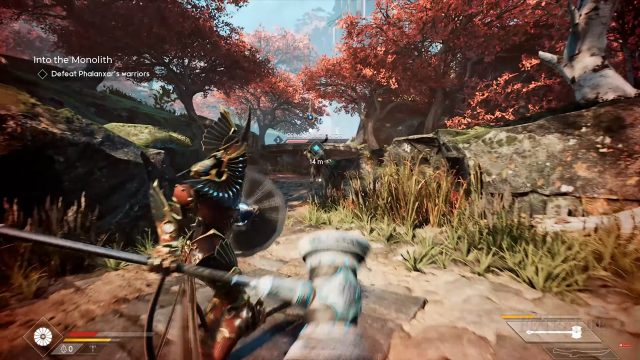 Coming back to character progression, you will first play the Main Story and level up your character as you clear them and defeat enemies. When you complete the game you will be around lvl 30.

Once you finish the main story line you will be introduced into the endgame mechanic called the Dreamstone. These are special missions with a Boss at the end that has enhanced capabilities. This Dreamstone mission are divided into three stages and act like a small “roguelike” game. Completing the first two stages provide you a boon making your character stronger during the rest of the stages and it also provides you information about the unique Boss enhancement (For example it might have reduction against a type of weapon or Status Ailment). The third stage is where you fight the boss and complete the mission.

The other end-game mechanic is called the Ascendent Tower of Trials. Here you’ll be locked inside an elevator and you will be going up levels fighting more difficult monsters each time. There is no limit to where you can get to and the best equipment in the game can be found here. Each level you complete will grant you keys that can be used to open chests found at certain levels of the tower.

I personally prefer the Dreamstone mechanic as each mission will playout differently and you might need to adapt your boons or equipment to defeat the final boss, while the Ascendent Tower can get repetitive after some time.

I played Godfall on the PC, but the quality of the visuals are what you might expect of a next generation game. The ambience, light effects, and character animation are very good. Enemies are very distinctive from one another and the same goes for the Valorplates. 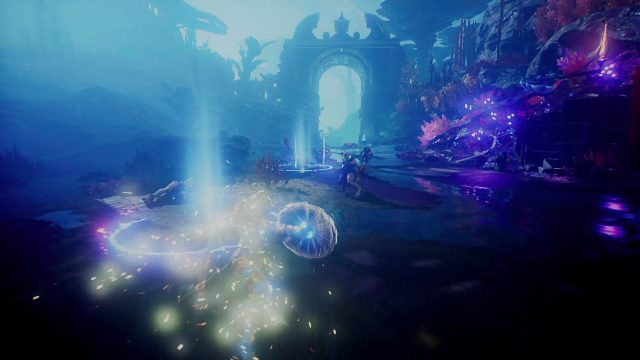 The world is very hand crafted and I often found myself stopping at some locations to just take a look at the fantastic views. Each realm is very distinctive from one another and the audio effects reinforce that as well.

The performance was very good overall, as I only had a couple of stutters now and then when starting certain fights.

The music was fitting for the game, but unimpressive. I don’t think I can recall a single track from the game, though I don’t remember anything feeling out of place. The voice acting was actually very good, though there was not a lot of it in the game.

Godfall is priced at 60 USD, which is probably more than I think the game is worth considering the rather short campaign, and lack of weapon variety and abilities. Players are obviously expected to spend a good amount of time doing end game activities, so your mileage will definitely vary here depending on what sort of player you are. It’s hard to quantify exactly how much time you could spend playing Godfall, but you still have to ask how much you’d want to even if you could.

Godfall is a game that I didn’t have high expectations for, because it didn’t exactly have a unique concept, and much of the gameplay mechanics are a combination of other extremely popular games like Warframe, Destiny and other looter shooters. However, I did enjoy my time with the game, and I can honestly see other enjoying it as well, particularly in co-operative play. 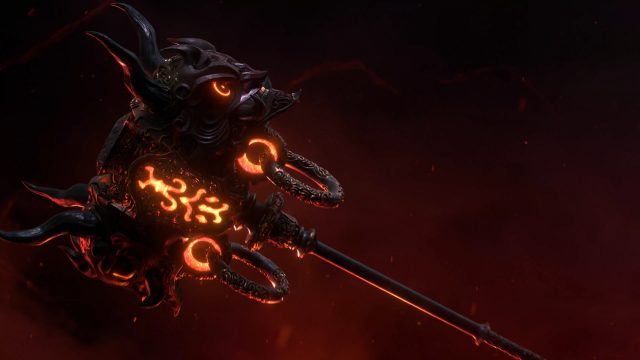 For 60 USD I think you can justify the price if you plan to play with friends, but if you’re going to be playing primarily solo then I suggest waiting for a sale and for the price to come down. Godfall is definitely fun to play, but it is certainly not at the top of its genre, and isn’t a must buy game on day one.

If you’re diving into the slasher-looter be sure to drop by our Godfall wiki. For more Reviews be sure to check out next Assassin’s Creed Valhalla Review: More Meat, Less Fat and Xbox Series X Review: A Hell Of A Start For Xbox Series X Games.

7.5
Summary: While primarily Godfall is a fun game, if you're planning to play for solo content it may not be worth the full 60 USD at launch. Godfall mixes gameplay mechanics from a few popular titles, but doesn't do anything ground breaking. The game is great to play in co-op and will be best suited for those looking forward to multiplayer content.
Story & Setting (6)
Gameplay & Level Design (8)
Audio & Visual (8.5)
Replayability (8)
Pricepoint (7)