In this Godfall Beginner Getting Started Guide we will be providing you with all the information you need in order to get started with the Action-RPG slasher-looter Godfall. Godfall is a rather simple game, but some mechanics can be overlooked, so in this guide we will help you understand everything you need to know, in order to become a master Valorian Knight.

In order to get off on the right foot with Godfall, understanding the basic mechanics of the game is key for success. We’ll go over the basics in combat, enemy attacks, healing, Weapons, crafting, recommended skills and more. 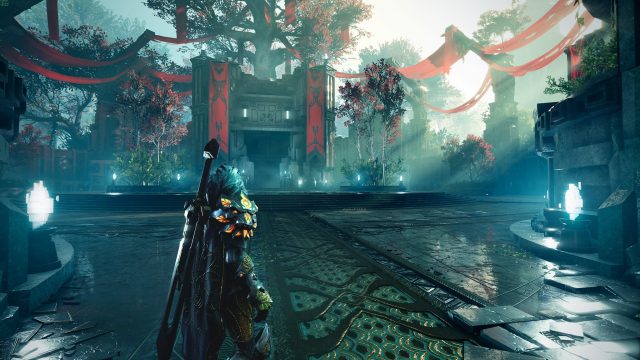 The first thing you should learn when you start playing Godfall is how the combat and each type of weapon works, as each type has its own unique Moveset and Techniques.

All Enemies have a fixed set of moves that you will learn as you fight them. There are three types of enemy attacks and they differ in how you can react to them: 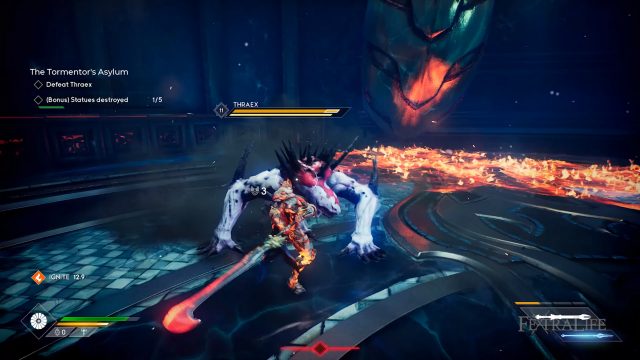 Normal Attacks: The enemy will just attack you with its standard moveset. You can use your shield to parry the attack to prevent damage and you can also perform a timed parry to leave them vulnerable.

Blue Attacks: These types of attacks can only be performed by Elite enemies and Bosses. The enemy will glow blue and then perform a powerful attack. The best way to react to these attacks is to perform a timed parry, as it will cancel the attack and leave the enemy vulnerable for a small period of time.

Red Attacks: These type of attacks can only be performed by Elite Enemies and Bosses. This attack cannot be parried and if you use your shield you will only mitigate part of the damage. You can try to attack the enemy to stagger it to cancel the attack, dodge backwards and wait for it to finish, or use the Shield Attack skill to cancel it.

You can heal yourself by using Life Stone charges. The amount of healing depends on the Life Stone type that you currently have equipped and some of them provide buffs or additional effects when consumed. To regain Life Stone charges, you will need to pick up green orbs dropped by enemies. 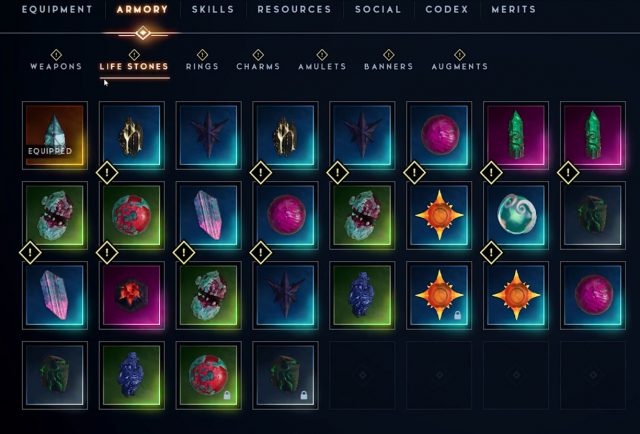 In Godfall you can have two weapons equipped at the same time and quickly swap between them during battle, so it’s a good idea to have an AoE weapon, and a single target Weapon complementing each other in combat. 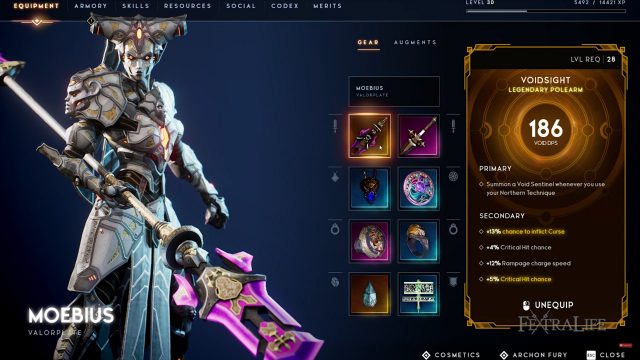 Dual Blades are the fastest attack weapon in the game. They deal low damage but compensate this, with their fast and consecutive attacks. Their Northern Technique increases your damage output for a small amount of time, while their Southern Technique acts like a hook that can be used to bring enemies closer to you.

Polearms are my favorite type of Weapon as they allow you to perform moderate damage from a safe distance. Polearms are best used with a hit and run strategy. Their Northern Technique allows you to jump towards the enemies performing a small AoE, while the Southern Technique throws the polearm dealing high single target damage from a safe distance.

The reason why I like the Polearm so much it because of its reliability in combat. You can fight from a safe distance and keep yourself out of harm’s way very easily. When enemies perform AoE attacks you can use the Southern Technique to damage them while you wait for the attack to finish.

Warhammers on the otherhand, have the slowest attack speed in the game, but they compensate this with their incredible damage and AoE attacks. They are best used against groups of enemies but require some distance between you and the enemy to start off the attacks. Their Northern Technique creates a devastating AoE that can briefly stuns enemies, while the Southern Technique releases a ranged attack that deals damage forward in a straight line.

Greatswords act very similarly to Warhammers but are more balanced in respect of their damage and attack speed. They mostly perform horizontal attacks which can be very effective against numerous melee enemies. Their Northern Technique makes you swing the weapon in a circle pattern while moving forward, while their Southern Technique throws the Greatsword forward, and then comes back to you, dealing damage twice to the enemy.

I personally found it useful to use a Polearm in combination with a Greatsword allowing me to keep a safe distance at all times, while dealing with both single targets and large groups. Another good combination is either a Longsword or Dual Blades accompanied by a Warhammer to deal with multiple enemies at a time.

Godfall Skills & Which to Choose

Skills play a huge part in how your character performs in battle. Some basic movements such as Weapon Techniques must be unlocked by placing at least a single point into that skill, so it’s important to know what each skill does and how it will affect your character.

The skill tree is shaped into a square and you can place attributes starting at any corner. Each Skill can be increased up to five levels and there are no level restrictions whatsoever. You will acquire 1 Skill Point each time you level up and you’ll also earn them for completing certain missions during your playthrough.

Godfall allows you to reset your Skill Tree at any given time and it’s completely free, so you can experiment with different builds. You can even respec while you are on a mission or even before a boss fight, so feel free to try out each skill and see which of them works best for you.

During early stages of the game I highly recommend that you first take at least 1 point in the following:

1 Point Weapon Techniques: This will unlock the Northern and Southern techniques of all weapons greatly increasing your combat capabilities. It should be your first pick.

1 Point Finesse: Adding a single point into Finesse will unlock a slide that you can perform after a dodge. This will greatly improve your ability to dodge enemy attacks and to quickly get away from danger.

1 Point Polarity Attacks: This will provide you with a free AoE attack when you fill up the bar and swap weapons as well as increasing your damage output by 20% (which is a lot) for 30 seconds.

I also recommend that you assign at least 3 points into Might and Vitality. This will grant you 120 additional Stat points greatly increasing both your damage output and survivability.

From here you can assign the following Skill Points as you see fit. Remember to check each Skill and respec to test out how they perform. A great way of doing this is by visiting the Training Area located on the right door behind the Seventh Sanctum.

Some other Skills that you might want to take a look at are:

Ailments: Ailments provide you with a passive chance to inflict any of the various Status Ailments against your enemies. If you max out the skill, you will also deal 20% more damage for each status ailment the enemy has and this can scale very quickly 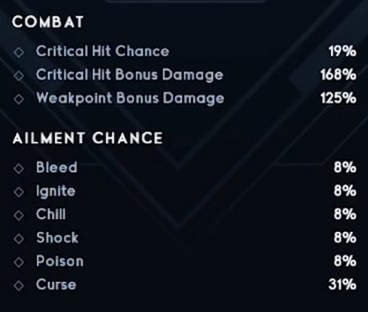 Shield Attacks: This skill increases the effectiveness of your shield and allows you to perform powerful ranged attacks. The most interesting feature about this skill is its level 5 perk, which allows you to perform a unique move that interrupts an enemy’s Red Power Attack. This is the most reliable way to prevent this type of attack so you should really think about adding this to your build.

Takedown: This skill allows you to quickly perform a takedown after blocking an enemy attack. This can be especially useful against shielded enemies, as their shield becomes ineffective against this type of attack.

Rampage: By quickly landing several quick attacks you’ll get a 20% damage boost. This Skill works best with Dual Blades due to its attack speed.

Valorplates & How to Unlock Them

There are 12 Valorplates in Godfall, each of them providing a unique passive bonus and Archon Form. An Archon Form acts like an ultimate ability that you can use when the bar is filled greatly increasing your combat capabilities. 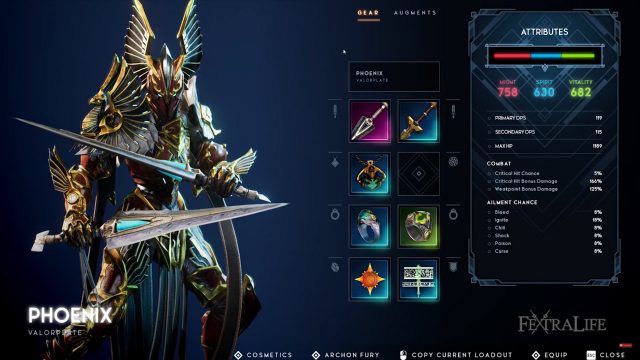 In order to unlock Valorplates you’ll need to first find their required Resources. Most resources can be found by exploring the three different realms, Earth, Water and Air. As you explore these Locations you’ll stumble across interactable objects that give you that area specific resource.

Some special resources can only be obtained from Bosses or Missions.
You should choose a Valorplate based on the type of build you are using as most of them increase a specific Skill or Status Effect.

Depending on your build, the Archon Form might take a long time to  charge, so save it for when you need it most. In addition to their passive abilities, Valorplates have Augmentation slots, that will be unlocked as you level up. You can insert augmentations into these slots to further increase your combat capabilities. The “Drain” stat on the augments indicate the amount of energy that is required to insert that augment.

Item Level: The Item level has a big impact on the Damage, Primary Effect and Secondary effect of all items. You can find the same piece of equipment with different level requirements, and the higher it is, the more powerful the item will be. The Item Level depends on the level of the area where you found it

Rarity: Weapon Rarity affects the main effect of the Item, for example for weapons it affects damage output. Rarity also affects the amount and type of Primary and Secondary Effects that an item will have:

Upgrade Level: You can upgrade all items up to +5. Upgrading an item will Increase its main effect. At +3 you will be able to enhance one of its Secondary Effects, and at +5 you’ll be able to choose an additional Secondary effect.

Primary Effect: This effect is fixed to the Weapon or Item. Legendary Items have unique and more powerful effects that are not available to regular weapons.

Secondary Effect: These effects are random and the amount of power an item has, depends on its rarity and upgrade level. 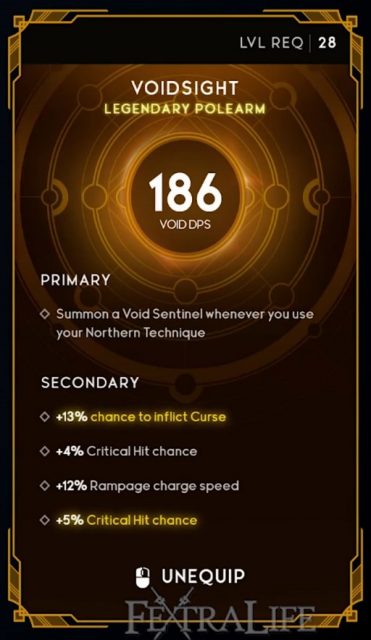 Players can upgrade and enhance their Items at the base once they complete “The Godsmith” quest near the beginning of the game. Interact with the forge to start upgrading your equipment. 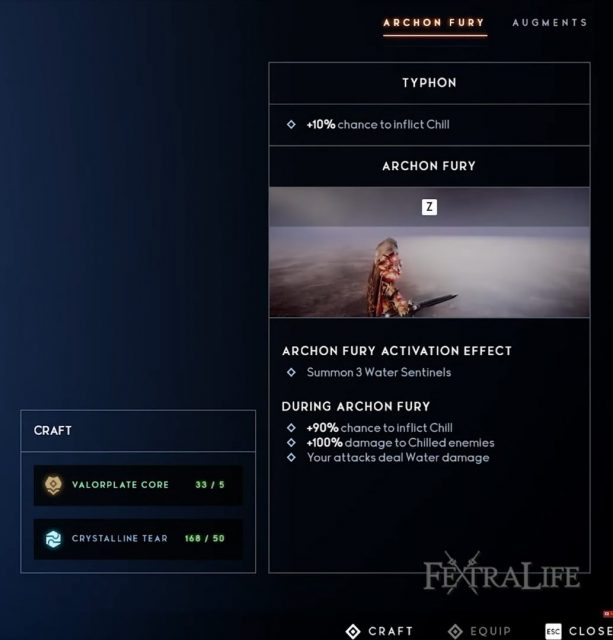 There are two different ways to enhance your equipment:

Upgrade: All the Items you find will have a base level of +0. As previously mentioned all the Equipment can be upgraded up to +5 greatly increasing the weapon capabilities. You’ll need Resources that can be found by defeating Enemies, completing Missions and salvaging other equipment.

Enchantment: Most Equipment in the game with the exception of Augmentations and Common Items can be enhanced which results in a rarity level increase. You can upgrade any eligible item up to Legendary, its Primary Stat won’t change, but its effects will be vastly superior.

Merits are a kind of achievement that you can complete to earn rewards in game. These are a great way to earn the different types of currency required to upgrade your equipment, so make sure to check them out and complete them to increase your progression speed.

The Realm bosses will require you to gather Sigils in order to face them. You can acquire these sigils by completing Hunting Missions of that particular Realm.