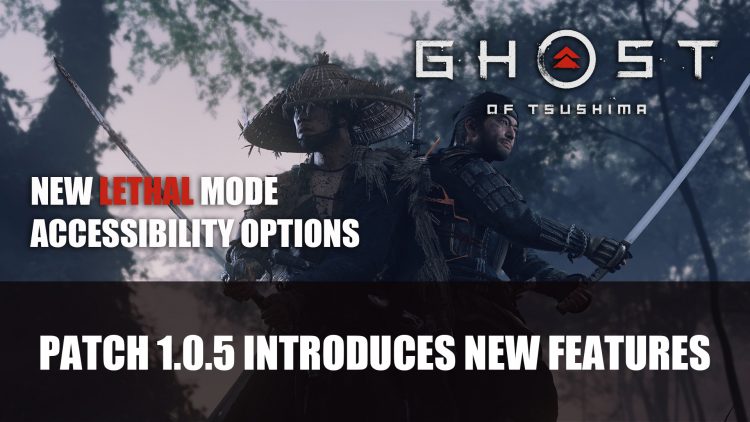 A new patch will bring some additional features including Lethal Mode and accessibility options.

Ghost of Tsushima has received some feedback in terms of accessibility by comparison to the The Last of Us Part II, there were features lacking which the developer Sucker Punch have begun to address by adding in options. The patch has now gone live and will need 2.78 GB of space.

In patch 1.0.5, Sucker Punch adds main accessibility options under Lower Intensity Combat and further options when is comes to subtitles and HUD text. There will also be an ability to change colour to red, yellow, blue or green.

The Lower Intensity Combat mode is meant to “…maintain the heart and feel of Ghost of Tsushima combat while relaxing several timing-specific elements. Combat is less intense, giving you more time to react. Stealth settings are more forgiving, and enemies take longer to detect you,” according to the patch details.

Further changes to make the gameplay for more accessible include the enemies will take longer to detect The Ghost, plus enemies won’t attack Jin while he is healing. Many enemies that have unblockable attacks will become blockable in the this mode, enemies will also stop attack combos after dealing damage to Jin, and heavy attacks will be able to interrupt brute type attacks.

Alternatively if you want a further difficult option, there is addition of “Lethal”, which adds a whole further challenge to the game. The new mode introduces deadlier weapons, Jin’s katana and enemies’ weapons will cause more damage. Foes will also become more aggressive in their attacks, while Jin will be even more quick to detect, as well as the chances to dodge and parry will become much slimmer in terms of time to react.

The patch also comes with a number of bug fixes. For more details head to our Ghost of Tsushima wiki.

Ghost of Tsushima is currently available to play on Playstation 4.