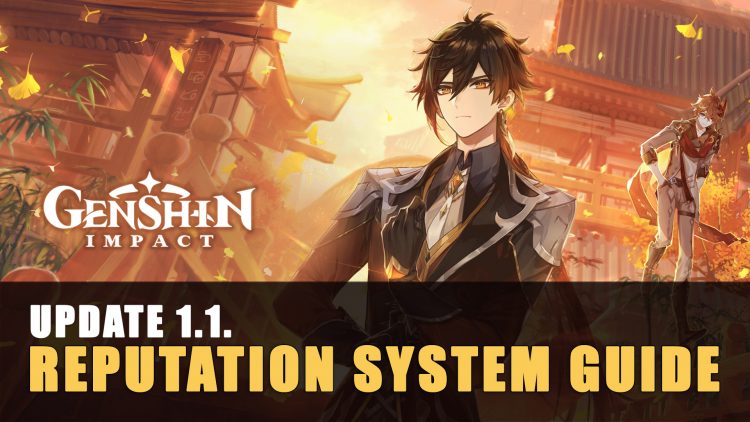 Releasing this week on November 11th is update Version 1.1. for Genshin Impact, bringing with it a number of new additions including the City Reputation System, which will reward players with a number of new items useful for exploring and unlockable features

miHoyo have shared new details about the latest update 1.1. for Genshin Impact which releases on November 11th, in a few hours depending on your region. In this latest update which they outlined will add a number of new additions including new characters, story, quality of life improvements and a brand new City Reputation System. 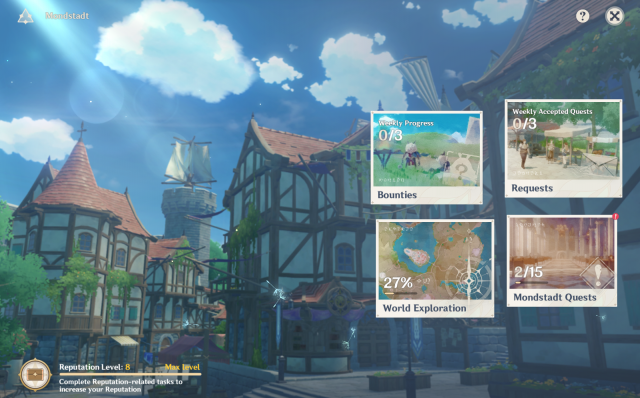 Why is this update highly anticipated? Well it will add a number of new things to do and will make exploration much easier. Previously tracking down stray Oculus Elements were a hassle, but with the new addition of blueprints, it will add a number of craftable items that can help make exploring that much more enjoyable. If you’re looking for a way to catch the wind without having Venti constantly in your party (or you missed out on the Venti banner), there is a new Wind Catcher which will grant you a way to gain new heights. Read on for all the details of the new additions and quality of life improvements to Genshin Impact!

What is City Reputation? Well it’s a new system coming with Ver.1.1. which allows a player’s main character to to earn Reputation by completing requests from NPCs. The more requests you complete, the more reputation you will earn, unlocking a number of Reputation Rewards.

City Reputation Requirements:
In order to start earning reputation, you need to fulfill the following requirements, which should be no problem for those who have been playing this game regularly since launch (even casual players like me can do it!). Reputation is split into Mondstadt and Liyue Reputation systems:

Once players have unlocked the Mondstadt Reputation system, you can talk tot he Knights of Favonius Coordinator called Hertha in order to check your progress.

How to Gain Reputation

There are 4 ways to increase your reputation:

1)  Region Quests: You can complete various quests in both Mondstadt and Liyue.

2) World Exploration: These include a number of activities:

3) Bounties: Hunt down and defeat bounty targets to increase your Reputation for that city. A new list of Bounties will reset every Monday. Completing a maximum of 3 bounties a week across all cities.

4) Requests: You can complete requests from NPCs to increase your Reputation in that particular city that they reside in. Requests will also refresh every Monday. You can complete up to 3 requests total each week across all cities.

And now what you can get your hands on, if you complete these activities. As you unlock Reputation Level (yes a new leveling system is here), you will gain rewards such as gadge Blueprints, special city features, namecards, recipes for Cooking, wind gliders, and other rewards. The first example that miHoyo has posted is the Azure Wind Glider. Previously there hasn’t been a way to gain new cosmetics apart from the reward for the launch and the platform exclusive glider for PS4. This means we can gain new cosmetics with some grind, plus other rewards that will be very helpful in exploring Teyvat. 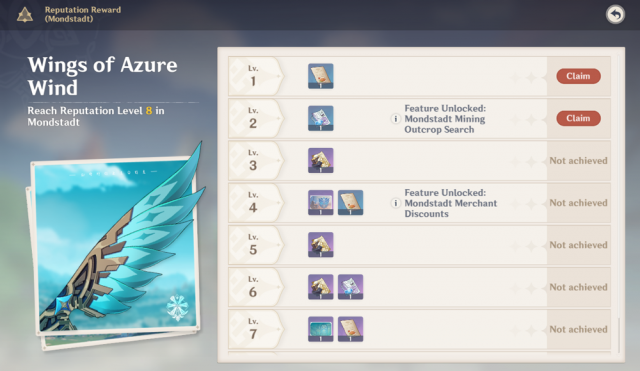 Yes, there will be another form of Resin added. While we do know the Original Resin is getting an increased max cap of 160 from 120, there is now the addition of Condensed Resin. The Blueprint can be obtained from reaching Reputation Level 3 in Liyue.

The benefit of using Condensed Resin is to gain two sets of rewards at one time. While the sets are still at random, this could save you some time.

2) You can only have a maximum of 3 Condensed Resin at one time.

This handy meal in a pouch (um…yum?) can be used to replenish a character’s health/or revive without the need of opening your inventory. The gadget can only hold either one HP-recovery dish or one type of revival dish. The NRE will also provide a dish choice that will best match your party’s situation automatically. This could useful if you’re out of food, and need a quick boost, without needing to open up the Menu as there is a dedicated keybind.

This live portable stove can be obtained by gaining Reputation Level 5 in Liyue. You can easily setup a stove anywhere in the open world, and cook some delicious food. The stove is temporary, and will enter cooldown for 300 seconds, after which is will disappear. There are limitations to this stove, don’t expect to whip out the pot in mid-combat, the stove will break if you enter a combat area. 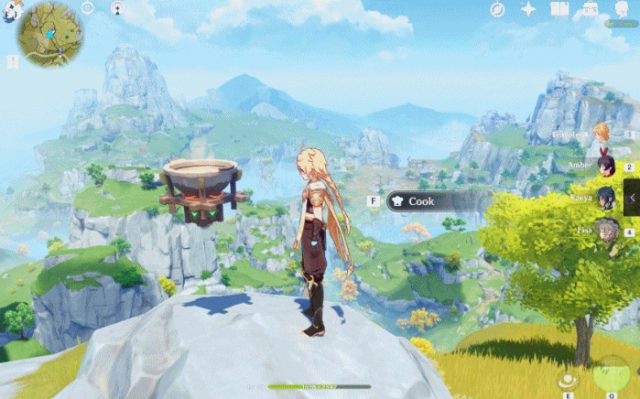 For this gadget you will need to reach Reputation Level 6 in Mondstadt to gain the blueprint. Just like all the gadgets this one is also temporary, however it lasts up to 7 days. You can plonk down a Waypoint in areas that you may want to visit daily. There are restrictions as you can only have one Portable Waypoint at a time, and there is a 60 second cooldown before you can create a new one.

There are also items which will help you locate precious ore materials and gain a merchant discount. 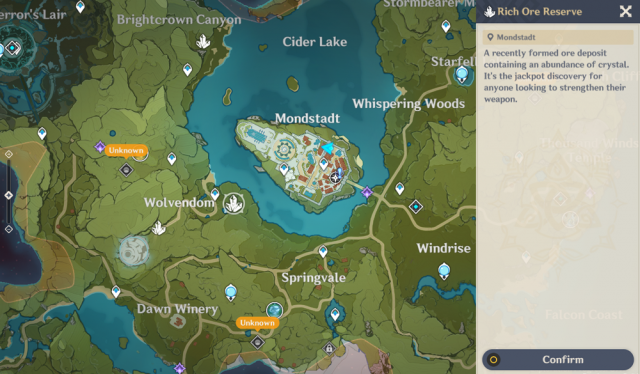 How to Use Mining Outcrop Search

After gaining the feature you will need visit Wagner the Blacksmith in Mondstadt or Master Zhang in Liyue. They will help you find ore deposits in the region by placing handy markers on your map. These will grant Crystal Chunks from mining, and Magical Crystal Chunks are you reach Adventure Rank 30.

Finally we can gain a discount on those goods sold at the Good Hunter and Mondstadt General Goods shop, by gaining Reputation Level 4 in Mondstadt, which is an unlockable feature. Once unlocked you will gain the discount at these merchants.

While not exactly a feature, you can earn yourself some stylish looking Namecards by grinding for that Reputation. This will be displayed with your traveler info which you can display proudly.

You can also bag yourself some new recipes, by achieving Reputation in the two cities: 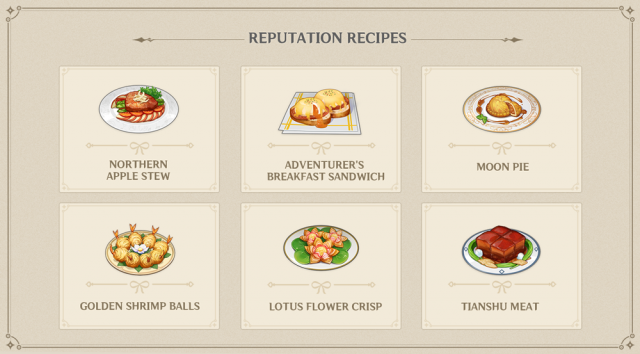 Gain some new wind glider styles by doing the following:

While this guide concentrates on the new reputation system, you should also be aware a number of improvements have been made with this update.

All in all, this update certainly adds a number of changes and looks to offer a lot of free-to-play content, but I’m curious to see how fast it will be to gain these new reputation levels. There is also the additional characters, new storylines and first season event to look forward to.