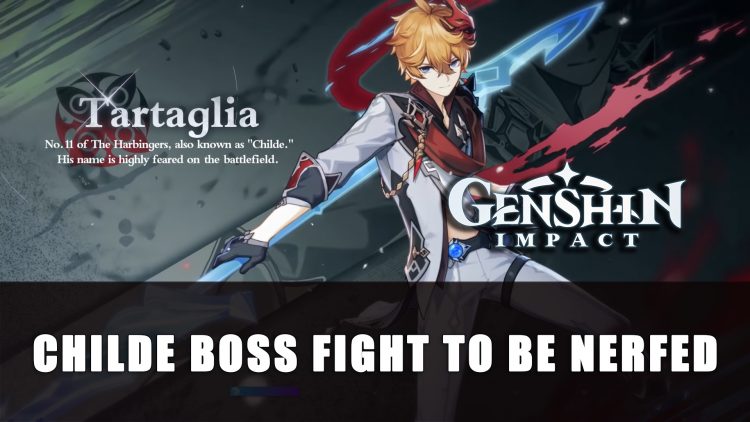 MiHoyo has announced they have decided to decrease the difficulty of the boss fight against Tartaglia (Childe) in the story portion.

A new patch will be released for Genshin Impact to nerf the boss fight against Childe in the story version. Childe is also a new weekly boss which was added to the game in patch 1.1., but this version will not be adjusted.

Come November 19th, the main story quest or archon quest Heart of Glaze, which pits players against the elemental wielding version of Childe (which makes you question “hey why doesn’t my Childe do that?”) will be getting a nerf due to feedback from the community.

Our developers are planning to make the following fix within the 11/19/2020 update:
Decrease the difficulty of the Childe boss fight in the archon quest “Heart of Glaze.”#GenshinImpact

The fight I think personally was challenging, and didn’t really match the recommended the average party level of 35, but also scales your World Level. However, it is doable once you learn the moves or stack up on potions/food if you’re struggling.

This starts a debate about game difficulty, as you need to complete the fight, in order to continue the questline/story. Normally storyline quests are meant to be manageable but it seems due to feedback, maybe miHoyo felt they didn’t want their players to be deterred, or struggle through. If you’re looking for a further challenge there is always the weekly boss version which can be fought in both solo and in co-op.

This isn’t the first time miHoyo has responded to community feedback, as recently they increased the Original Resin cap from 120 to 160, and also introduced Condensed Resin to help with Artifact farming sets.

What do you think of the change for the story boss fight? Let us know in the comments below.

For more news be sure to read next The Game Awards 2020 Nominees Revealed Includes FFVII Remake, Ghost Of Tsushima And More and Cyberpunk 2077 First Xbox Series X And Xbox One X Gameplay Previewed.