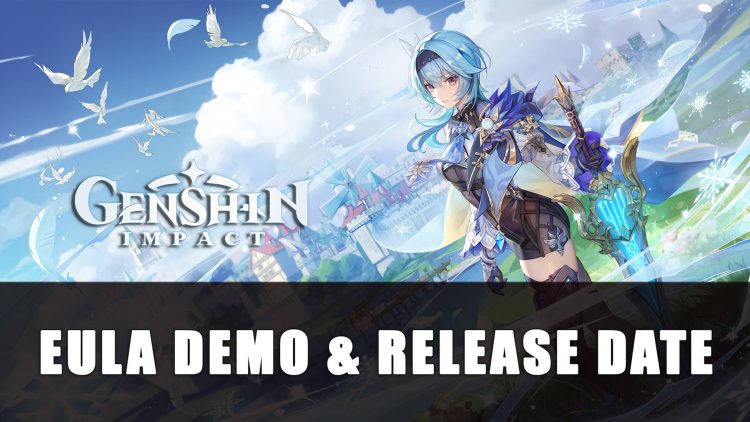 miHoyo have announced the arrival of the latest 5-star character to join the free-to-play online RPG Genshin Impact.

The next 5-star character to be joining Action-RPG Genshin Impact will be Eula, who arrives with the banner “Beneath The Light of Jadeite”. This will also give an up-rate for 4-star characters Xinyan, Xingqui and Beidou. Eula will only be available on the special event banner from May 18th 18:00 to June 8th 14:59:59. Players will also get to test run Eula with the trial event during the event wish. Eula wields a Claymore and her element is Cryo, you can check out her moves in the video below:

Along with the new banner will be a new story quest called the  “Aphros Delos Chapter”. Adventurers will need be adventure rank 40 or above in order to unlock Eula’s Story Quest. This will be available also from May 18th onwards. There will also be new weapons coming to the even wish weapon’s banner which are the 5-star Song of Broken Pines (Claymore) and 5-star Aquila Favonia. You can check out the 4-star weapons and details below:

Paimon is here again today with the scoop on upcoming events! Tap the picture below to take a peek~

In case you missed it, miHoyo released a character teaser trailer for Eula recently, featuring a bit of the backstory for this Cryo character. It wasn’t too much of a surprise that Eula’s banner is starting just as Zhongli’s is ending, as Eula was announced alongside the latest 4-star character Yanfei during the last livestream about update 1.5. We also got to see a peek at Inazuma which will be coming in the next major update, but no official release date for that update just yet.

Genshin Impact is currently available to play on PC, iOS, Android, PS4 and PS5. Be sure to join us on Fextralife Twitch channel this week as we’ll be streaming some Genshin Impact, visit our schedule page to stay up to date with when and what we’re streaming, or simply click the follow button to get notifications for when we’re on next.

For a rundown of recent RPG news find it here in Final Fantasy XIV: Endwalker Expansion Releases On November 23rd.