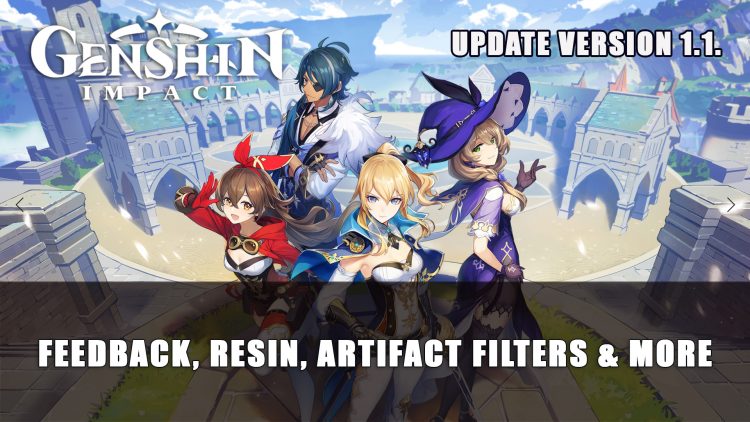 Developer miHoyo share some updates that will be coming to Genshin Impact in Version 1.1., including Original Resin cap, quality of life changes and more.

It’s been almost a month since the free-to-play online Action-RPG Genshin Impact exploded onto the gaming scene, offering a game packed full of cute characters and addictive gacha system. But if you thought the developer was anywhere near done with the game’s current state you’d be wrong. Recently miHoyo released a couple of surveys which were doled out to players, asking about some feedback in terms of what could be done better. It seems they have listened to some of the concerns from players.

One of the major comments players have been very vocal about is the Original Resin system, currently players have a cap of 120 Original Resin, which regenerates slowly over time. Resin is needed in order to claim rewards from such activities as Ley Lines and Domains, these cost anywhere between 20 to 40 a pop. In the lastest post on the official website, the devs have shared that in the next update, Version 1.1. the cap will be increased from 120 to 160, a 40 resin increase. While this isn’t a huge increase, it’s good to know they are listening to the community. Other changes include requiring 1,200 resin instead of 1600 for the Battle Pass Weekly Missions.

Other feedback from players included the lack of keybinds. Currently there is no way to re-keybind which is a little limiting for players but in the next update which is expected on November 11th, it will add some of the key binding and controller setup functions. Further functionally will come at a later date/version.

Other improvements will include a filter system for Artifacts, currently there aren’t many ways to sort through the masses of artifacts, and if you have say, eight characters that can be a little cumbersome. In version 1.1. you will be able to filter artifacts based on attributes. There will also be a way to see which characters are currently using which artifacts and weapons at a glance, with a little character icon next to the that item.

One interesting item will be coming in the next update is one that will give the option to set customisable Waypoints. The current system only allows you to teleport to unlocked Waypoints or Domains, but there will be a new item that will allow players to come back to areas that they frequently visit. This will be great for farming spots, such as getting upgrade items to Ascending for example. It doesn’t mention how this item will work exactly but hopefully they’ll share more on this.

While this doesn’t address everything players in the community have voiced, it’s great to see miHoyo listen to their players and try and meet them half way. I still hope they’ll continue to increase the resin cap as it will be very limiting moving forward with the additional content. I also hope they add more co-op activities and controller support for mobile.

In other news, there will be a new event coming on October 27th, so far there’s little detail as to what it involves, but they tease rewards for participating.

The new event meticulously prepared by Paimon, “Adventurers, Assemble!”, is about to begin!

Participate in the event for the opportunity to win Mora, artifacts, Primogems and other rewards!

Recently miHoyo outlined a number of updates coming to the free-to-play game, which includes the next big update 1.1 which is expected to arrive on November 11th. This update will add a new event to the game. December 23rd will bring the version 1.2. with a new area Dragonspine and a new event. There was also the addition of the new character banner Sparkling Steps, which featured the explosive Klee.

What did you think of the developer feedback? Don’t forget to leave your feedback in the official Genshin Impact survey which can be accessed in-game through browser, you will also be rewarded with 30000 Mora for taking part.

Genshin Impact is currently available on PC, iOS, Android and PS4. Don’t forget to drop by our Fextralife Twitch channel as we’ve been playing the game on the regular.