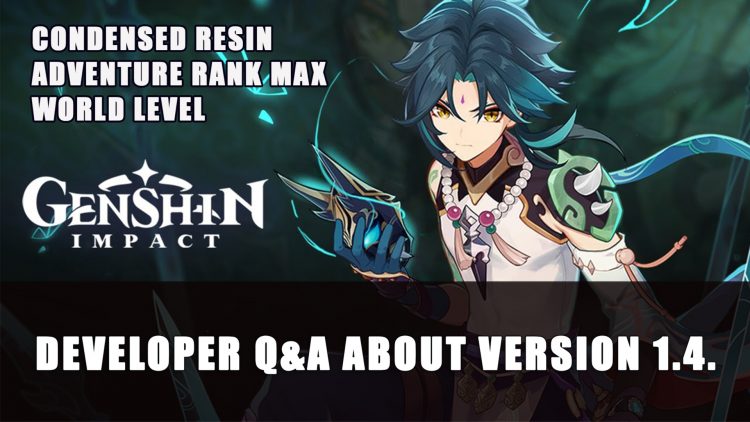 Mihoyo recently published a Q&A with the developers, answering some burning questions for Genshin Impact fans on the upcoming version 1.4. Several questions were asked including the popular topic of Condensed Resin.

Condense Resin is a craftable item available in Genshin Impact through alchemy, using 40 Original Resin to make 1 Condensed Resin. At the moment players can use Condensed Resin on Domains and Leyline Blossoms to receive double rewards, in one go, rather than doing the activity twice. There is a maximum of three Condensed Resin that can be held by a player at one time.

MiHoyo had a Genshin Impact 1.4 Q&A session which covered Condensed Resin, what happens when you reach max Adventure Rank, decreasing World Level and more. According to the article Condensed Resin limit will be adjusted in ver. 1.4.

In Version 1.4, the maximum amount of Condensed Resin that you can have at once will be increased! We will discuss this in detail during the Version 1.4 Sneak Peek Livestream.

The feedback doesn’t share exactly how much the maximum Condensed Resin will be adjusted by, and we’ll have to wait until the preview stream which will be happening at a later date.

As for the Original Resin system, many do wish that the regeneration rate would increase (I would be happy with this), but whether MiHoyo will increase this too, is currently unknown. An extra 5 Original Resin was introduced with the Battle Pass, while welcomed we could always do with more resin as this is key for gaining loot.

The Q&A questions also covered what happens when you reach the maximum Adventure Rank in Version 1.4. In the next update excess Adventure EXP will be converted into Mora.

Another interesting question was about World Level. In 1.4. there will be a “plan for adjustments to all Travelers during the Version 1.4 Sneak Peek Livestream.” Whether this means you can decrease your World Level if you regret your decision, or another system in place is unknown, but more details will be available in the next livestream.

Currently, there is the Ley Line event which you can use Original Resin to gain double the rewards but with a maximum of three times a day. There is also a daily login event which you can take part in on the official miHoyo website, while no resin you can gain rewards such as Primogems, Adventure Experience, Mora and more.

Just recently Hu Tao was announced to be coming to Genshin Impact, arriving on March 2nd in the new Moment of Bloom banner, which will feature the five star character, plus boosted drop rates for four star characters, Xiangling, Xingqui and Chonyun.