The isometric cyberpunk detective game Gamedec just released, so we’re taking a look at what makes this game uniquely interesting, from its deduction gameplay to its different virtual worlds. Before we jump into the best parts of this game, let’s talk about Gamedec and what it is.

This is a sponsored post. Please note sponsored posts are only sponsoring coverage, our opinions on the game are our own and not affected by any business relationships with developers or publishers.

Gamedec is a single-player non-combat cyberpunk isometric RPG. You are a “Game Detective” or “gamedec” for short, a person who solves crimes inside virtual worlds. “Gamedecs” will help uncover the truth for their clients by interacting with virtual worlds, so they may be called in to help get a regular gamer out of a particular situation or hired by corps to discreetly take care of unsavory business.

In this dystopian 22nd century Warsaw City, there are a number of virtual worlds that have given way to a number of real problems. Gamedecs such as yourself are specialists who can uncover those who cheat, steal, and deal with a number of crimes in this wild west online. You must use your wits to gather information from your witnesses and suspects, get to the bottom of deceptive schemes, save lives, and investigate the extraordinary relationships between virtual worlds and their inhabitants.

This is a non-combat game so the focus of progression is on your choices, to which the game will continuously adapt and revolve around. You can customise your character’s background, which will set your detective with a backstory on the familiar lines of RPGs, ranging from the High City (home to the big leagues, CEOs, celebrities), to the Low City that is engulfed by darkness even on the best of days. There is also a Mid City option that amounts to the average citizen, and the Undercity which is home to the unsavory, those who rejected the daily norm, as well as poisonous bats or toxic mutant rats. Your character is a gamer at heart, and this is important as these virtual worlds consist of online games, and your know-how is needed to investigate your cases. 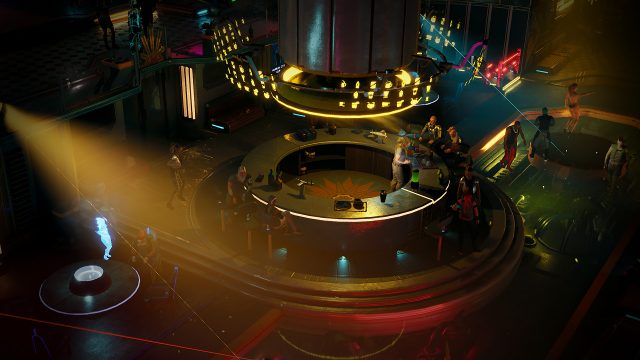 Gamedecs come from all walks of life, from doctors and journalist to professional gamers. They all jump into the Gamedecverse by using special equipment a-la Sword Art Online, using a couch, suit and helmet plus drugs specially formulated to keep you nourished while connected, and a Gamepill that will control your bladder, or colon so you can stay in the Net longer.

The gameplay uses a standard isometric point-and-click approach to walk around and interact with the world around you. Your focus will be on these interactions and the integration of several mechanics to create engagement and further the story, much like Disco Elysium.

As a gamedec you will enter different worlds, each a different game with its own set of rules. For example in Harvest Time you can plant your own crops and earn money by digging up your harvest to earn coins. Get enough coins and you can upgrade your farm.

You will get to play some of these “in-game games” as you’re trying to blend in as your average player, while on the hunt for clues by talking to other players in that world. Gamedec provides you with many ways to get the information you need to solve the case, such as using your professional skills or taking on side quests that unlock further clues for your main case or enhances your relationship with related NPCs, bringing you closer to further clues and deductions. 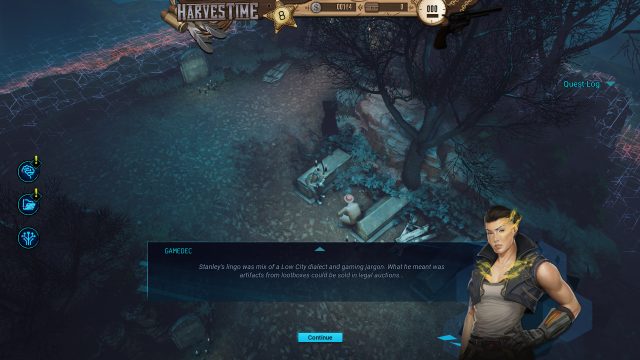 It’s the gamedec’s job to pick up clues and from the information gathered, make Deductions. Deduction options are always varied and there is no going back once you have chosen one, so players must get as much feedback and information as possible by gathering all available clues and not jumping to conclusions.

Each deduction will unlock the next set of reasonings and lead you further into the case. Keeping true to the motto that “you are your choices”, the game allows you to decide whether someone is guilty or not depending on your own opinion of what happened. This succeeds in making you feel like a true detective, gathering the information to determine what happened, without an easy black and white answer at the end.

You can read about everything you discover in your Codex, ranging from the people you meet, the conversations you’ve heard and a lot of useful information that will help shape your decisions. I enjoyed that it often felt like there wasn’t “one right choice” in dialogues as there is more than one way to get the information you need. 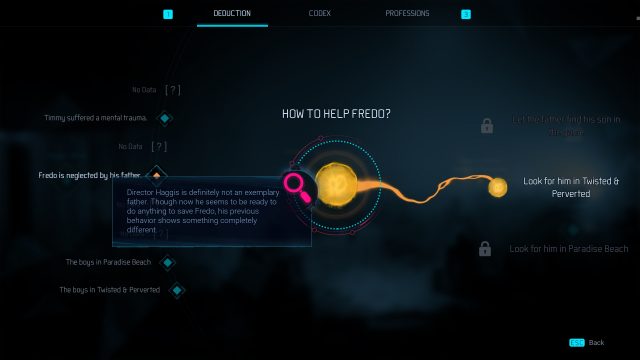 A quick questionnaire will make some initial choices that determine your background tags and some skills, but from there your character is yours to shape as you wish. Progressing through the game will have you making many dialogue options, that will open up Aspects you may have not had. Unlocking these will allow you to have more options in future dialogues, enhancing the role-play potential even further. 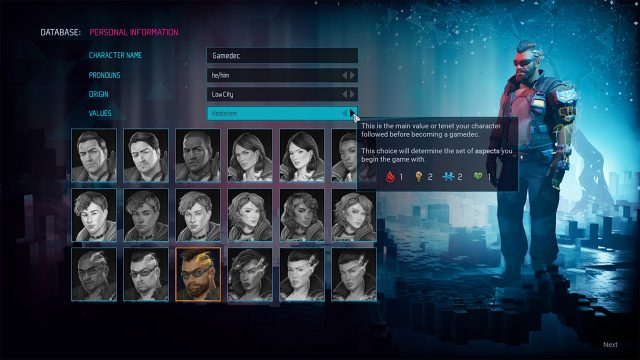 Professions also have a role to play. As you gain more information and question more people you will unlock further points to choose further Profession options about your character’s background. Whether you’re handy with a Scalpel on the medic side or have a way of manipulating people because you possess charisma with the Infotainer profession, each has different requirements, and are unlocked based on your previous choices. Your decisions will also affect what happens in the narrative. For example, you could help out someone with their own problem, and they may be recruitable to help you out in return. These decisions further deepen your character. Sometimes your choices have in-game consequences, such as being blown up or being trolled causing you to gain a death. 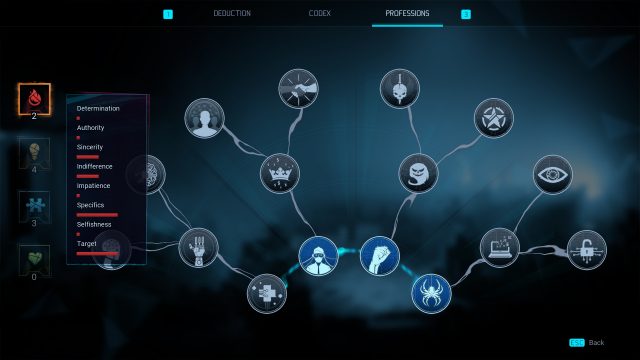 There isn’t just one place that people go, there are a number of online virtual worlds to explore, each catering to a different kind of audience. This is interesting to explore because they are all unique, meaning meeting different kinds of people and experiencing encounters and mechanics of that world. I had some fun when I ran into a player dressed as a unicorn who had some really strange requests.

A free-to-play farming world where players can grow crops, milk cows and enjoy a world of nature. The aim of the game is to collect coins to upgrade your farm and gain better skins.

Pretty much describes exactly what it is, a very adult place for thrill-seekers and sadists. Points are scored from killing or having sex. In order to live the ultimate fantasy people wear skins, a bit like transmogs in an MMO, in order to hide who they really are.

This world is a dating game all set on a beautiful beach location, and for those looking to meet a special someone. Here players can also wear skins to enhance their overall appearance.

The Gameverse is a fully immersive virtual experience with taste, smell, touch, but the Happy Hunting Grounds take this to the next level by making every injury feel real. Illegal sensory means everything that happens inside can affect the person in the real world also, meaning it’s possible to cause a stroke for the real life player from inside the game. Why would any want to visit this crime-ridden death trap you ask? It’s for those looking for a thrill, those bored with the real world.

There is even an MMORPG world to enter called the Knight’s Code. This world consists of drifting islands that have Strongholds. In a sort of PvP clan controlled game, also home to the Hon Clan which can only be joined with an exclusive invite.

Gamedec’s game-in-game variety was a pleasant surprise that gave a sense of uniqueness to each case. Taking on a new project meant I wouldn’t just use the “known” mechanics but I was in for discovering a whole new “game” inside my game. This is because you’re expected to pick up clues, but in order to blend in and understand the game more you will end up playing along also. The rules of each world still apply, so dying, killing, farming and other aspects still exist. Piecing together the puzzle becomes fun as you not only get to play detective but whatever the world you’re investigating’s game too.

The narrative of the game is in constant evolution based on your choices, and multiple playthroughs are needed to unlock everything and discover the many branching paths to follow. This gives the game great replayability if you enjoy its quirky and unique moments. In trademark European humor, Gamedec also pokes fun at these different kinds of game with a lot of satire and subtlety, so if you’re gamer you will find a lot of commentary that you can relate to. 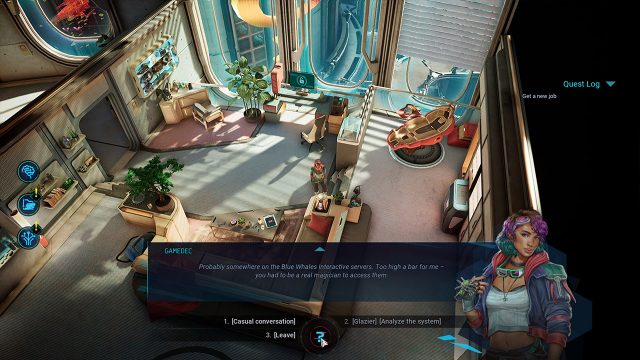 If you are looking for a narrative-driven adventure and to enjoy branching paths where your choices impact the outcome and your deductive skills are put to the test, Gamedec can be a lot of fun. Note that we played the game from an early preview version, where some text was not fully translated and bugs were not uncommon. That said, the developers were rolling patches frequently and there should have been a large day one update, so hopefully these issues are now resolved.

Gamedec releases on PC on September 16th 2021. A switch version is announced for a “later date”

If you enjoyed this preview of Gamedec be sure to check out more of our game overviews in The Ascent Preview And Gameplay Impressions: Everything We Know So Far (Shooter, Looter, RPG) and New World Preview: Closed Beta Impressions.