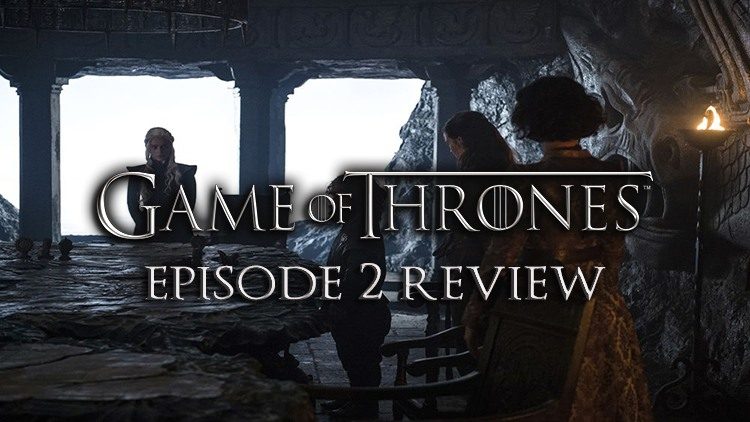 The second episode of Game of Thrones Season 7, titled Stormborn begins to set the stage for the coming struggle for the 7 kingdoms. Let’s see how it all played out! It should go without mention, but spoilers! Disclaimer: this show is clearly a brilliant generational production, so its scoring is relative to itself and not other shows. A 7 for a Game of Thrones episode is easily a 10 for any other show.

This episode begins with Dragonstone, with plans being hatched during a storm. Daenerys, Tyrion, Varys, and Grey Worm are battle planning in the map room and this opening sequence really shows us the maturation of Daenerys as a ruler as she grills Varys on his very turncoat ways, In a rare moment of authenticity we see Varys’ humanity as he reveals his loyalty to the people who suffer. The emotionally charged banter between Daenerys and Varys crackled with intensity and revealed both characters to be highly motivated by their own sense of integrity. For them, the coming battle is no mere power grab. Daenerys proves this even further later when stating she will not simply attack King’s Landing as she is no Queen of Ash. Daenerys is developing into a true well balanced ruler right before our eyes. 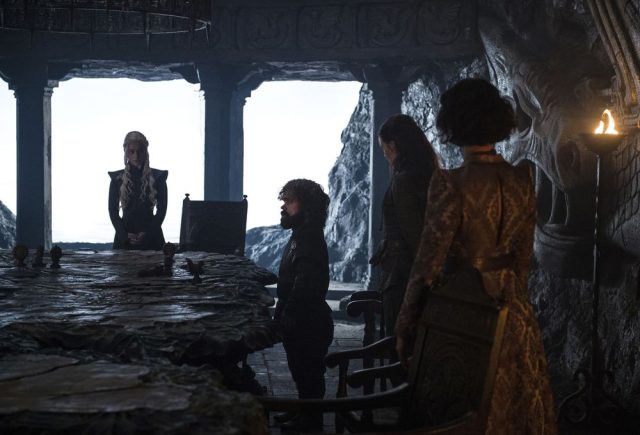 We are then joined by Melisandre, who gives her spiel to Daenerys on the Lord of Light. At this point, Melisandre is proving to be quite the survivor, however, she here operates as facilitator and encourages Daenerys to summon Jon Snow for a future alliance. This is the fire and ice meeting that fans of the series have been pining for and next week’s teaser shows it will finally come to pass. I have so much anticipation now invested in what will be said! Will they find fellowship or confrontation? Will the unite against the mustering might of Cersei? Jon is now fully aware of Dragonstone sitting atop of a wealth of dragon glass, which is vital against the coming White Walkers, as is the fire of the Dragons. The question is will Jon have to take this mineral by force or will Daenerys and him strike an accord.

Jon is made aware of the dragon glass cache by Sam, who finds himself in yet another scene of cringe inducing bodily matters. In this, Sam is attempting to cure Jorah of his greyscale by literally peeling the affliction from him. Sam continues to demonstrate his bravery in the most insecure way, and it has been satisfying to watch him never really develop a backbone, yet push against authority and assert his wishes in his own way. 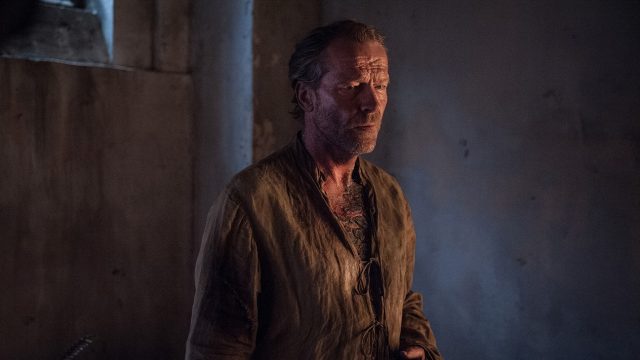 The Empire Strikes Back

And speaking of doing things their own way, Cersei is devising a plan to take out Daenerys’ dragons, which involves a massive ballista that fires a spear/bolt that can shatter dragon bones. Something tells me we are going to be getting a sad as hell dragon death scene at some point this season, which will further cement Cersei as a truly despicable character. Beyond that and Jaime’s short parlay with Randall Tarly, the Lannisters are not much of a factor in this episode, although they do in some ways win the first battle of the great war. 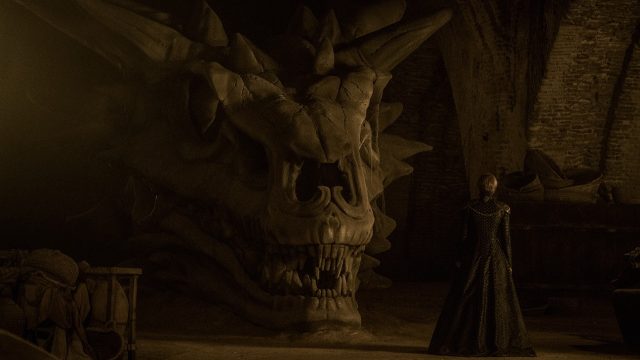 This victory comes way via Euron Greyjoy who is a huge factor in this episode as he arrives to take the prize he promised to Cersei by sieging the ship of Yara and Theon Greyjoy who are escorting the Sand Snakes who are responsible for the poisoning of Cersei’s daughter. Euron is a beast in battle and single handedly wipes out 2 of the Sand Snake sisters and then tosses Yara aside in what was no contest. He dares Theon to come to her rescue and Theon nopes out in one of his lamest moments ever. Yes, he’s had it rough. Yes, PTSD is a factor here. But jeez, just when the guy seems to be redeeming himself he pulls this shit. Also, prior to this the dialogue between Yara and Ellaria Sand is some of the shittiest innuendo writing you’ll hear. All that was missing was someone nearby eating a hot dog and another licking an ice cream cone. Welp, no matter because they’re both prisoners now and likely headed for death. Unless Theon can buck up and finally assert himself. 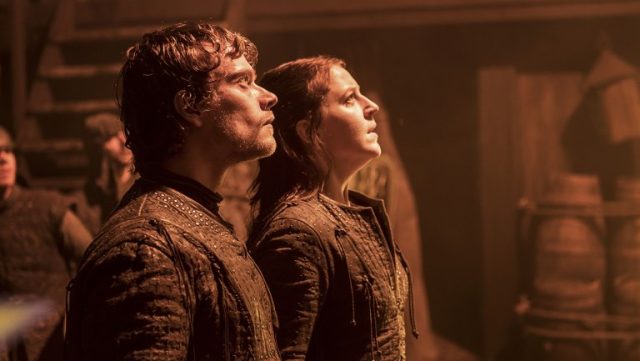 What’s going on in Winterfell? Well Sansa and Jon’s tensions continued to develop but Jon surprises us here by appointing Sansa ruler while he is gone. He can share! Baelish loves this clearly and heads to Jon to sow discord, upon which Jon pulls a very Ned Stark move by cutting through the bullshit and choking him up. Ned never learned to play politics and it cost him his head. Will Jon pay the same price? Baelish is certainly not one to forget an insult. Now with Jon gone, he will no doubt begin to work on Sansa. I am getting a little tired of the cuts to Baelish in the hall, with a wry smile. It’s as if he is only permitted to stand in one spot and lean against the same wall day after day. After a bit, one would draw attention to oneself with that kind of posturing. His character has been lacking subtlety recently, and I’m hopeful they can reclaim the more complex Baelish we saw earlier in the show’s life.  That’s a character you could almost side with depending on the situation. He’s a bit to one note broody for me now.

Arya’s story continues to come full circle as she comes face to face with 2 long lost friends, first her portly buddy from way back who has managed to survive in his own way. He tips her off to Jon being king and the look of love that returns to her face was a high point for the episode. Home is soon and it beckons. She followed my shouting at the TV advice and turned north to Winterfell rather than continue her journey of revenge to King’s Landing and if we get a gratifying hugging scene soon you can all thank me for advising her. Later she sees Nymeria, her long lost dire wolf again and there is a brief but tender moment of recognition here. Nymeria goes her own way because that’s the way of things now and Arya’s acceptance of that shows her maturity as well. 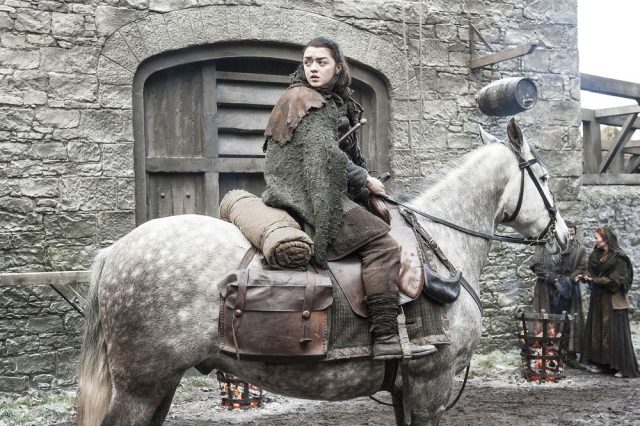 7
Summary: Overall, this episode set a bunch of plates spinning in motion and built a bridge to next week's big meetup. But despite the variety, not a whole lot really happens and the strength and core of this episode was about Daenerys and her emergence into a powerful, direct and thoughtful ruler. How she weathers these coming storms will continue to refine her character, but she is already proving herself formidable and capable of imposing her will on any situation. That resourcefulness is going to be tested soon enough. This is still the calm before the storm. Even for the Stormborn, pain and loss is certain to come.