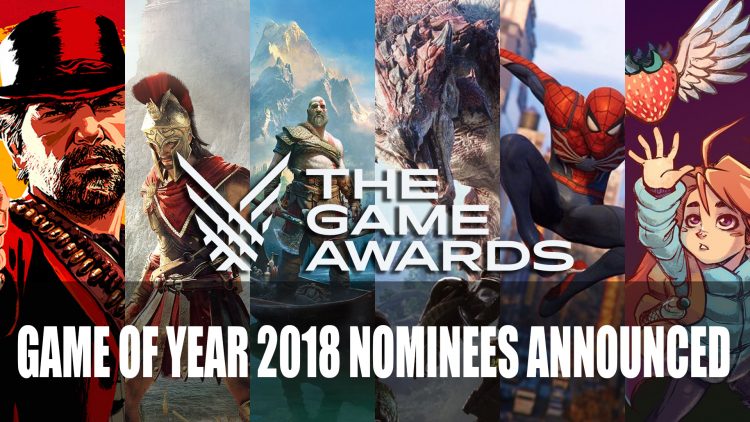 It’s that time of year again where you can help pick the Game of Year 2018 awards. There are an array of categories for The Game Awards and over 100 games to choose from.

While the list is truly expansive, there are some hard hitting contenders for this year’s Game Awards, titles include Assassin’s Creed Odyssey, God of War, Monster Hunter World, Red Dead Redemption 2, Detroit: Become Human, Ni no Kuni II: Revenant Kingdom, Dead Cells and much more. Some games will fall into multiple categories. If you wish to help nominate your favourite game of the year you can via The Game Awards website. You can vote every 24 hours and sharing your vote on social media will add an extra booth to the winner formula.

For the contenders for Game of the Year these include:

For the contenders for Best Role-Playing Game these include:

The winners will be announced on December 6th at The Game Awards which you can watch live on major streaming platforms including Youtube, Facebook, Mixer, Xbox Live and Playstation. There are also a number of international platforms covering in a variety of languages including Chinese, Korean, Portuguese, German and Russian.

The times are as follows according to each timezone:

Who do you think should win the Game of the Year Award 2018? What about for the best RPG category? Let us know in the comments below.

For a round-up of the latest news find it here in Top RPG News Of The Week: November 11th (Diablo Immortal, Red Dead Online, FFXV And More!). Some of the nominees are also in our wikis, be sure to check out our Monster Hunter World, Red Dead Redemption 2 and Pillars of Eternity II: Deadfire wikis!