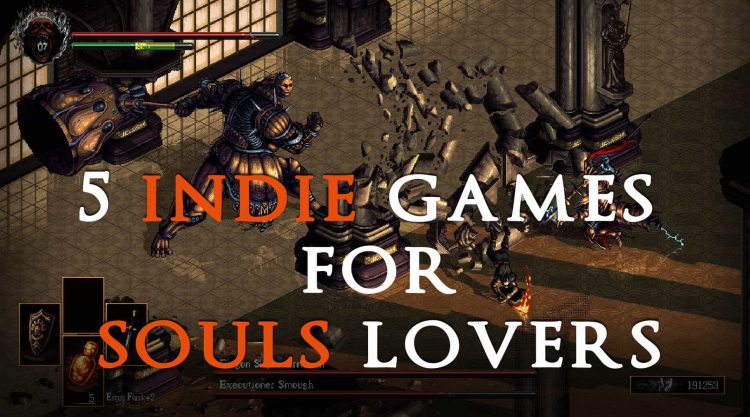 With the widespread availability of video game development software and the enormous popularity of several celebrity titles, indie gaming seems to have entered a golden age. And in the wake of games like the Souls series – Dark Souls, in particular – many indie developers have embraced the bone-crushing difficulty and epic adventuring fans like me have come to love. Like undead knights gearing up to battle the Hellkite Dragon, indies are eager to offer the unique and difficult experiences most major studios simply cannot.

So, to celebrate 2014’s E3 event (where many of these will be showing) and the indie developer movement, here’s a short list of up-and-coming titles I’m sure would appeal to any Souls fanatic. The wait until new Souls content and Bloodborne (formerly known as “Project Beast”) news is long and dark, but these games will surely keep your bonfire kindled once they are released.

Bored with Dark Souls? Can’t wait for Bloodborne? Check out these indies.

[Update 2017] You can find more souls-like coverage by following our updated news on Salt and Sanctuary, Blasphemous, Hellpoint, Eitr, Immortal Planet and Lucah.

After developer Heart Machine unveiled its KickStarter several months ago, it was immediately clear that Hyper Light Drifter was poised to become something special in the realm of independent video games: a deep, unique adventure steeped in lore and difficulty. Its beautiful trailer – featuring gorgeous 8-bit visuals, lightning-quick gameplay, and atmosphere to spare – spread like wild fire and it wasn’t long before this indie darling obliterated its fundraising goals. But why is it at the top of this list?

Hyper Light Drifter puts you in the well-worn boots of a sword-wielding, hooded drifter exploring the fantastic ruins of a desolated world packed with mystery and deadly enemies. If that description alone doesn’t sound like a familiar and appealing premise, you might be in the wrong place. Promising epic battles, a slew of armaments, and a near endless dungeons to explore, Hyper Light Drifter sees satisfying fun in the challenge of its dangerous world, much like the Souls games before it. And although its vibrant 8-bit color palette is light-years away from the gloomy solitude we know and love, darkness beckons us to explore the forgotten depths of Hyper Light Drifter all the same, sometime later this year.

Drawing a tremendous amount of inspiration from the 2D Zelda games that also inspired the Souls series, Below is a top-down dungeon crawler in the classic NES tradition. Developed by Capybara Games, the game tasks the player with the adventurous exploration of enormous, unforgiving environments filled with traps and enemies. Armed with little more than a sword and lantern, the game’s made even more difficult by rogue-like mechanics that could mean instantaneous death as punishment for relatively minor mistakes. Sounds fun, right?

Out of all the games on this list, this one is perhaps the most overwhelming in its scope. Much like the Souls games, players in Below are made to feel tiny in the face of the challenges before them. As if the vicious enemies weren’t enough, the bird’s eye view, tilt-focus and minimalist design aesthetic combine to drive home the point that your hero is largely insignificant; only by the breadth of your adventure and sharpness of your skill can you leave a lasting mark on the world of Below. Dungeons and enemies abound, as do beautiful landscapes, polished mechanics, and an engaging soundtrack. A release date is yet to be announced.

One of the things players love most about the Souls series – whether they realize it or not – is the games’ implicit design. They are designed in such a way that you learn as you play; you do not need to be told where to go and what to do in order to make progress. The result is that players are encouraged to develop their skills and become incrementally more powerful, leading to a more rewarding experience. The fun new indie Shovel Knight, influenced by equal parts Mega Man and Dark Souls, features this concept in spades (see what I did there?).

Developed by Yacht Club Games, Shovel Knight casts the player as the titular “shovel knight,” tasked with the infiltration of a treacherous castle and the annihilation of its murderous inhabitants. In addition to the trademark shovel weapon, the knight is able to collect a variety of tools, powers, and treasures, some of which are only available via the discovery of hidden passages and secret chambers. And though the game appears to be a simple adventure platformer, a ton of challenging content is promised in the final build, slated for release this June. With its retro 2D, 8-bit style, tight controls, and classic chiptune music, Shovel Knight is poised to become a critical and popular darling.

Described by its creator, Matt White, as “Dark Souls meets Metroid,” Ghost Song, like all the games on this list, is big on atmosphere. Borrowing its well-honed gameplay mechanics from Metroid, the crash-landed protagonist is forced to explore a mysterious planet riddled with tunnels, caverns, and ruins. Does doom or hope wait in the dark depths of Ghost Song? The game won’t make it easy to find out. Expect to uncover the types of hidden paths, secrets, and lore Souls-lovers like myself are always ready and willing to commit to memory.

Amid Ghost Song’s complex setting, strange and challenging encounters with a myriad of creatures and characters await. Some are willing to aid you in your quest, while others will try their best to stop you. Perhaps more than any game here, Ghost Song is determined to make the player feel utterly alone in battle and exploration; a goal aided by excellent writing and voice acting. Sure, you may encounter similarly lost souls along the way, but like many characters in the Souls series, they serve only to reinforce your desperate isolation as the darkness closes in. Ghost Song was recently approved on Steam Greenlight for release online sometime later this year.

Out of the games on the list, Perish is perhaps the most obviously similar to a Souls game. Embracing the brutal difficulty of the Souls series, Perish is a rogue-like action fantasy game where every death at the hands of unforgiving enemies is permanent. No matter your progress, one false step and you’re doomed. According to its creator and programmer, Anthony Richard, Perish’s design and mechanics are heavily inspired by the Souls games and after watching the trailer, it’s immediately apparent the game wears its influences on its sleeve.

Programmed in Unity, its visuals are deceptively beautiful, hiding a dangerous world beneath its earthy, polished surface. In addition to exploring the environment, players can unlock new classes, abilities, and weapons, and as it gains notoriety, new features are bound to be added. With nothing but love behind its production, Perish is a passion project that deserves your attention. A release date is yet to be announced.

[Update 2017] You can find more souls-like coverage by following our updated news on Salt and Sanctuary, Blasphemous, Hellpoint, Eitr, Immortal Planet and Lucah.

Devin is a geek culture enthusiast of the highest order and the writer and narrator of the A Knight Adrift dark fantasy adventure podcast. His many interests include cooking for his wife, head-butting his cat, and obsessing over Dark Souls. He is currently working up the nerve to develop a video game, but it might be a while.