Dedicated to digging into the game's lore. Bring your thinking caps.
1
Reply

118   1
Addicted
First Warden
#1
So, if you've seen the Dark Lord Ending, you'll know that there are eight Primordial Serpents, Kingseeker Frampt, Darkstalker Kaathe and six un-named Serpents. Is there any lore behind these six unknown ones, and is it known, or hinted at, as to what their role is/was and what they were doing during the Chosen Undeads hardships?

Is it at all possible, that these six others are there as a fail safe should Frampt or Kaathe somehow die, so then one of the six can take their place?
1
FallDown117i3DTyrant
The Age of Dark consumes us all. No matter who, or where you are, it shall befall the world, so it goes.

5352   68   699
Chosen Undead
Peacemaker
#2
I don't think there was ever any lore given to the other six serpents that appear by Frampt and Kaathe. It could be one of those serpents was in fact responsible for Manus being unleashed upon Oolicile since we're never given a name of who the 'toothed serpent' was but it's more likely that it was Kaathe.

Failsafe? There is a good chance that that was what they were there for yes. However I can't say for sure as it seems as though Frampt and Kaathe aren't able to die by anything we throw at them.
0
GrinTwist
Currently undergoing a dangerous adventure with a friendly dragon.

489   13
Obsessed
Commander
#3
I don't have anything to add other than the 3 headless serpents in the Shrine of Winter possibly suggest that three of those serpents are dead by Dk2. This may have happened during or at the end of a Dark Age as that is what I interpret Winter to mean in the world of Dk. Although it's possible they could survive without their heads if they work like a hydra? It's never revealed what lies at the end of their body to the point that those serpents in the SoW might not even represent the Primordial Serpents.

Also do Kaathe and Frampt look different in any way other than voice? I just think it would be quite amusing if it was actually the same serpent leading you down two different paths although that would be pure and pretty pointless speculation.
0

87   1
Regular
Battle Tested
#4
It's possible that the extra serpents are related in some way to the unused attack and death animations that Frampt and Kaathe have. Like when it was possible to kill them maybe another serpent showed up for essential story stuff?
0
oilswell

571   43   3
Obsessed
Commander
#5
My interpretation of the serpents - they are the power behind most of thing in present Lordran. Frampt looks like a traitor/rebel amongst them, since he sides with Gwyns ending. Maybe he adapted to live on the surface, who knows.
In the Dark ending Frampt is present, and this is purely my opinion, because the others don't know of his.. 'side business'.
If any of you here played Vampire the Masquerade, I think of serpents as 'Nosferatu' clan - imperfect, thus not suitable to roam the world freely - hence they embrace the Dark.

Kaathe seems to represent the will of other Serpents - spreading Dark using Wraiths, stealing (uniting) 'wild' humanity and ultimately by not linking the flame.
Then, the other serpents.. I just imagined they have rest of the 'world' in check - places like Catarina, Karim, Astora etc - should the chosen Undead escape one of the other Asylums.
0
Hey ya'll ! It'sa me, LuiG! PSN: Jupexy

4103   186   127
Chosen Undead
Peacemaker
#6
It might be more than just the 8 that are seen in the Game. I could see the entirety of the Dark Souls world Writhing with Serpents underneath.

These serpents were cunning enough to escape the extermination of the Dragons.

Seathe also experimented on people and created lesser Snakes in the Snakemen and Pisaca. I wouldn't be surprised if The serpents were originally vassals or servants of Seathe and this was all a ploy to overthrow him.

HOw I understood the Dark Lord Ending was that the Serpents tricked the Chosen Undead to fulfilling their goals and only needed t wait for the time to claim dominion over the land.
0
dreamnegative

These serpents were cunning enough to escape the extermination of the Dragons.

I think the reason they weren't killed by the dragons was because the dragons couldn't kill them as they cant reach under ground. Hell the hellikite one of the strongest dragons ever couldn't even kill us when we went under a bridge, yet alone 100 meters underground.
I think
The 6 unnamed serpents are a part of their own individual party, 3 belonging to Frampt and the other 3 belonging to Kathe. I like this because it shows us how little they really know. They have to work in a system similar to modern government to rule the world in the way they believe best.
Remember they are called primordial meaning that they were there before time, yet they are still so split on what is best.
Seeing as they are immortal their best choice would always be to light the flame and see what the future holds in store, yet Kathe and his 3 party members who are all Primordial and Immortal are so foolish as to act on impatience and erase the flame, their foolishness is also why Kathe is in the dark, hes blinded by despair and impatience, where as Frampt can see things clearly and knows what is wisest, which is why he's in the light.
0

If the Serpents were evenly split and it was just a game for them. Then it would make sense for them to allow history be buried in the past. With the undead rising and falling and forgetting more and more it would give the serpents free reign to do what they want, with no worry of humans interfering.

2235   110
Revived
Savior
#9
imo the serpents are what made dark souls lore so damn good. If it wasnt for the serpents Id completely give the edge in lore to demon souls, even tho demons still has better lore its just by a margin.
That frickin majestic design just makes me wanna play ds1 all over again!! 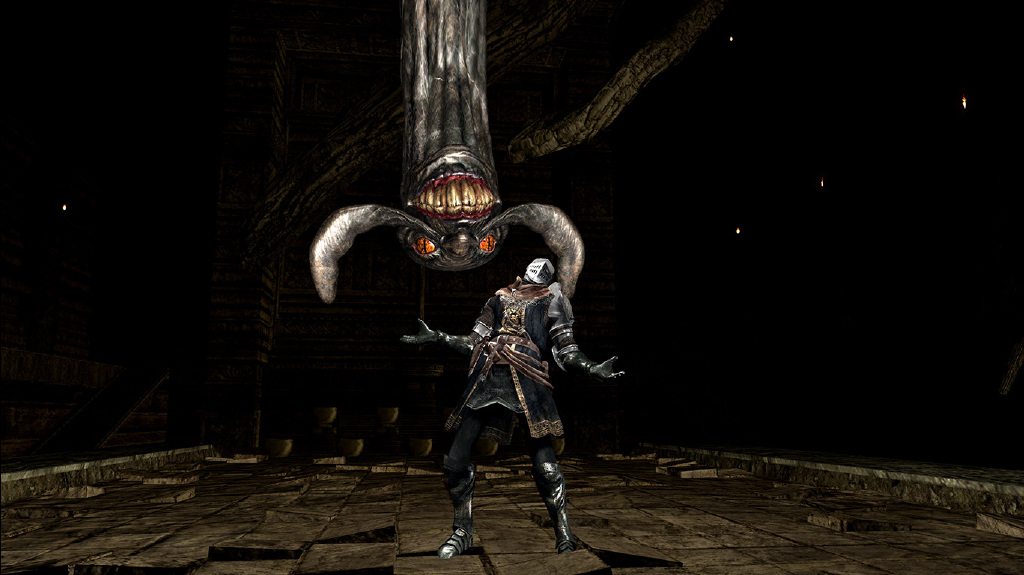 31   3
Newbie
Newbie
#10
I think it is a hydra it could be possible. I mean think about it if you get the dark lord ending you see more heads now you might wonder how are there more? Well it is a hydra or maybe there are more hiding until the dark lord comes they where around during the dragons but only two where found those could be others or a hydra.
0
lord caillou 12
URL=http://www.nodiatis.com/personality.htm][/URL][/CENTER]
1
Reply