Comments made to our Dark Souls Wiki
6

This boss is so annoying as melee, just makes the game into a bullet hell
0 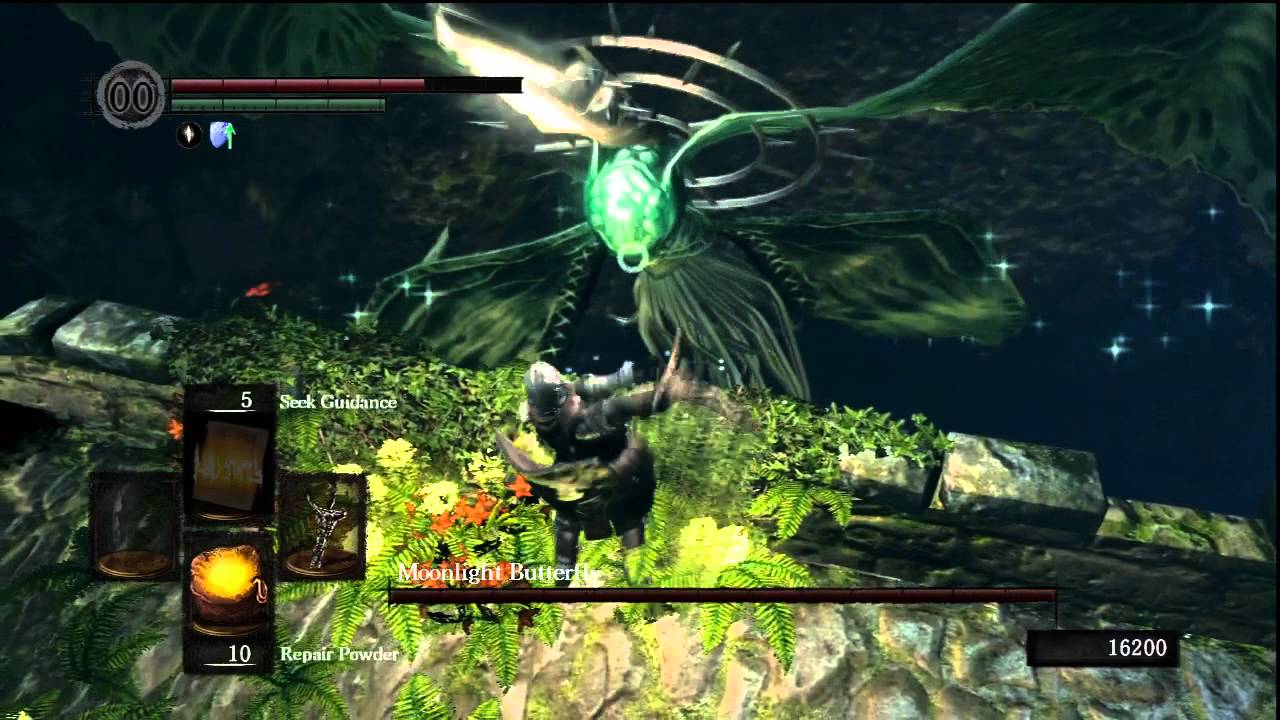 If you look closely, the butterfly actually slowly heals while resting on the side of the bridge
0

My Cummies couldn’t contain themselves when she penetrated me so hard with her laser beam . I miss you dear butterfly friend.
0

1. Get Gold-Hemmed Black Set
2. Get the Crest Shield from Oscar (Return to Asylum)
3. Get the Chaos Fireball Spell

The Shield & Set will help negate all the magic damage, you'll get maybe 10-20 damage from that homing blast it does (whereas normally you'd lose 30-50% hp). Keep your shield up the entire time it's attacking from a distance. When it lands, throw Chaos Fireballs in it's face, it will take extra damage from the lava that is spawn (Lava won't do anything to you since you cast it). You'll likely run out before it dies, so a couple more whacks of your weapon will do the trick.

It's highest resistance is magic damage, so I doubt that regular sorcery will help, unless you got something to negate it's attacks. All it's attacks are Magic Damage, so anything with the highest magic defense/resistance will help in this fight.

Compared to most bosses in the game, it is the easiest when you think about it. Yeah, it's definitely annoying, but most bosses use magic & physical damage to kill you, and most of them get your face when trying to kill you. This boss isn't in your face. The gear to counter it is really easy to find.
Even the starting equipment for Pyromancer & Sorcerer are decent alternatives to the Gold-Hemmed Black Set, and the other good alternative is laughably the Warrior's Rounded Shield that you get from the Hollow enemies in the Undead Burg, just need to upgrade it.

Check the equipment numbers for magic defense shields. the Best ones are the Shield you get from the many hollows in the Undead Burg, the Crest Shield from Oscar, or if you're lucky, the Stone Shield from those stone Giant enemies.

And tip to "Hug the wall"?? What wall? Most times the boss is FACING the entrance, so that tip won't do anything unless it's on the other side. And Lightning Spear? If you're strong enough to not only ACQUIRE that Spell but also USE that Spell, HOW THE HELL ARE YOU HAVING TROUBLE WITH THIS BOSS? Whoever added that tip really needs to get their head examined.
0