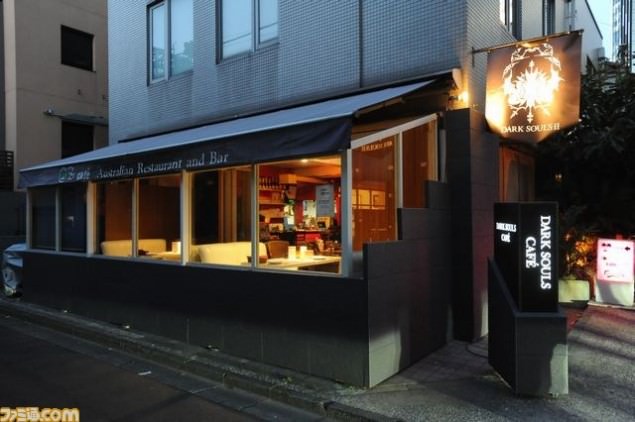 So is anyone else jumping for joy right now? I’d like to not be alone because I might look like a maniac right now by celebrating how a cafe opened up that’s over ten thousand miles away from me.

For those that don’t know though, here’s the update: they just opened up a cafe based around Dark Souls. Yes, somehow From Software has been able to open up a cafe based solely around what should be your favorite video game. How? Well they were able to get a store called Oz Cafe to redecorate for the coming of Dark Souls II.

Back story aside, what’s so great about this place anyways? Besides the overall decor of being surrounded by a bonfire, a shit ton of Dark Souls 2 posters, and replica armor; the best part of this place might just come with it’s food.

Looters will be met with the police, not torch hollows. Apparently we can eat the snakemen. Remember, those bastards that knocked you off the ledges and hid around corners waiting to kill you? We can eat them now. Think of it as the best revenge you can have, instead of just killing your enemy in-game and moving on we can now dine on their flesh with our friends and get drunk on estus. How’s that for a good time on a Friday? That’s not to mention that it only costs around 800 yen, which is only around seven dollars with change. Apparently endorsed by the great and powerful gods of Anor Londo the cafe now serves food that Gwyn himself ate. Now let’s forget that the current endorser for this food is now a rotting corpse found at the bottom of the Kiln, and just indulge in our own selfishness. We can now eat like Gwyn, for a while, I’m sure the cafe still closes. Oh and it’s around 2000 yen, which costs around 19 dollars so no matter which way you cut it the food is expensive.

Dung pies are now available, but not as pie. Alright let’s take a step back for a second. Yes, this may have been the very thing that we tossed at players for laughs and still acknowledged that it was basically poison. Yes, it has dung in it’s name, but I’m still curious as to what this must taste like. I mean if it really ended up on the menu, it must be edible right? Strangely, it costs around 1500 yen (14 dollars) which is a bit of an odd price for dung of all things.

Dine on the strong, and possibly become stronger. Remember that dude that knocked you out? Yeah, that big mushroom guy that you ‘accidently’ got your zweihander stuck into before getting promptly punched in the face. We can eat him now, along with those little friends of his. Now before I go any further with this I would just like to state one thing, you probably won’t get stronger eating this. Actually I’d go as far as to say that there is no probable chance of you ever getting stronger eating this, so don’t complain to anyone when you can’t kill the police officer that gave you that speeding ticket with one punch. Okay, before I go any further I’d just like to say: Just because I fantasize about eating my enemies doesn’t mean you should, of course that does make me better than you but that’s about it. Now with that out of the way, holy shit we can eat Kalameet. This might be the greatest thing I’ll ever be able to do to that blasted dragon and now I- I mean you can do it. For a price of around 4800 yen, which costs… just a lot of money.

I’d go on about all the different foods we’ll be able to eat but currently I’m having heart pain knowing the amount of money I’m going to blow off when I finally get to Japan via whimsical anime sequence. So if you want to know more about the food check out the menu here.

You can read more Food and Beer Articles here.

Someone that plays too many videogames and sometimes writes a few articles.

4 comments on “Foods to eat at the Dark Souls Cafe”