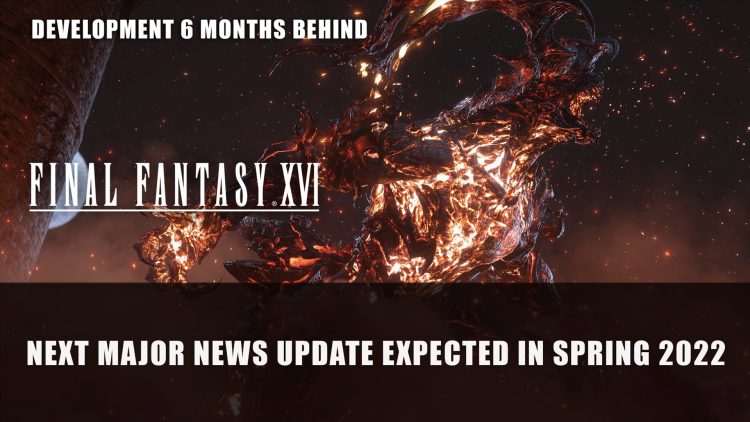 Square Enix producer Naoki Yoshida shares news update on next Final Fantasy XIV, with the next expected major details to release in spring 2022.

If you were hoping to see more of Final Fantasy XVI before the year is out, you will need to wait as producer and director Naoki Yoshida has now confirmed that we won’t be seeing another trailer until spring 2022. The message that was posted to the official Final Fantasy XIV Twitter account also explained  “the ongoing COVID-19 pandemic have delayed the game’s development by almost half a year”. This has caused a delay in receiving assets for the game and despite having a sizeable team currently working on FFXIV, it is still under difficult circumstances.

According to the post we won’t be seeing more information on the game until spring of 2022, where a “big reveal” will happen. This might reveal when the game will be released, but no details of exactly what will be unveiled. The next focus it seems will be graphic resource quality, combat mechanics as well as battles and polishing cutscenes.

In case you missed it, Final Fantasy XVI is the next major entry in the Final Fantasy franchise. So far what has been revealed is that FFXIV will be quite “action-orientated” but will also provide a story mode for those who rather focus on narrative. The story is also shaping to be another epic tale, a story of revenge following protagonist Clive Rosfield. It continues the theme of Eikons, powerful but deadly creatures that exist within Dominants, a man or woman that can call upon their deadly ability. Square Enix has already revealed Eikons, Phoenix, Titan, Shiva and Ifrit in the Awakening trailer, as for how many will be in the land of Valisthea is currently unknown but Yoshida has teased more will be revealed in the future. So maybe we will find out what other Eikons will be coming to FFXVI with the next major news update.

For more news find it here in Lies Of P Developer Interview And New Info and Chernobylite Unveils The Ghost Town Free DLC.