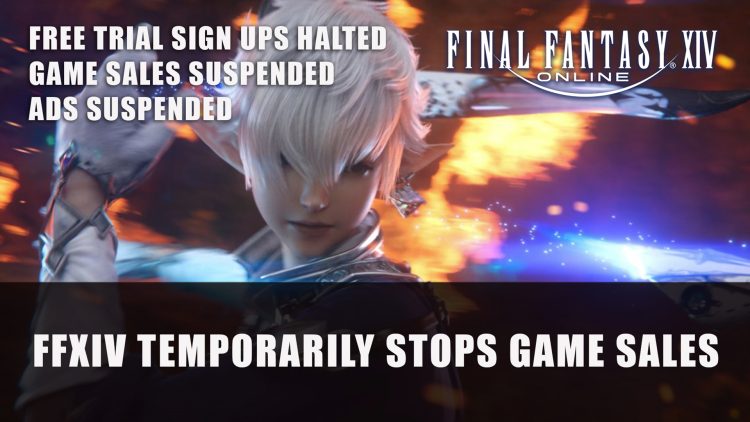 Final Fantasy XIV is experiencing a very unusual problem, it has become TOO popular. It has become so popular in fact that the game is facing longer than average queue time even after the first week of its latest expansion’s full launch, Endwalker.

The queues in fact are so long that many are waiting a few hours just to get in the game during peak times and on high pop servers. The MMORPG is facing not only long queues but recently experienced a login Error 2002 which according to the latest post from Square Enix on the matter, is an old bug from FFXIV version 1.0. The developer has announced the fix for this particular error will be rolled out on December 21st with Patch 6.01. 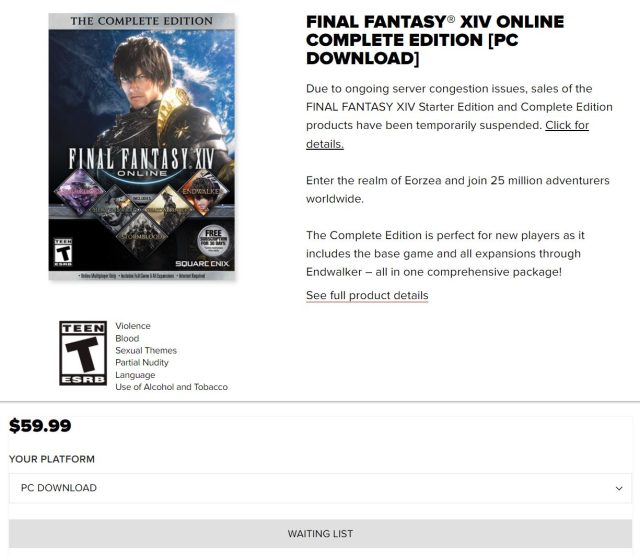 However, in the recent post by the developer, they are now putting into action a number of strategies in place in order to handle the influx of new players. This includes the current halting of sales of the game itself. If you visit the Square Enix website to purchase the game, you will find it has now been waitlisted. Square has also announced that no new free trial accounts will be available for sign up either until they get a handle on the situation. They are prioritising paid owners of the game and those who have a current subscription in place.

The developer has shared that the problem with the solution is ongoing as they need new server upgrades, hardware that has been difficult to obtain during this time due to COVID-19 which has caused shortages of semi-conductors which also affects their plans for fixing the issue. The team are considering adding new servers to each region. Squeenix has shared before that the pandemic has caused considerable development issues, but now also affecting physically server upgrades.

Also, the suspension of the ads for the game is also going into effect as they cannot advertise a game that no new players can buy. The sales of the Endwalker expansion for current players plus upgrades will still be available.

Previously, they have issued current subs a free week of game time, however now they are giving players two weeks (on top of the original seven days) of extra game time to appease players for the long wait to log in.

Having tried to get into the game this week on NA servers, I had the same issue, having to log in an hour or more before actually being able to play the game. The good thing though is the servers are very stable once you are in, so no issues with being logged out or stability, at least from what I experienced. If you are planning to play at all this week, I would highly recommend logging in during non-peak times if you can, as the queues are almost non-existent. 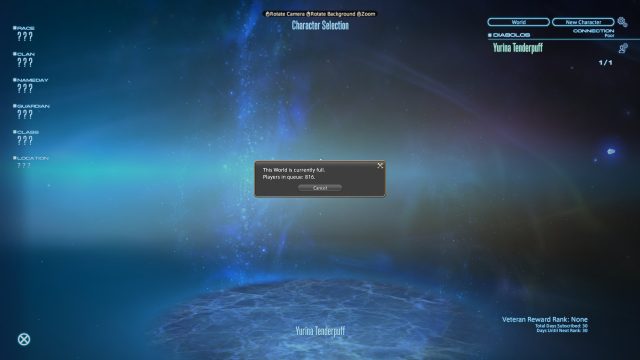 This was not the worst of the queues as they were in the thousands quite often this week.

This issue has also caused some other problems as players know that the queue time is long, that they are staying logged in for longer periods of time which can also cause congestion. Of course there are measures in place for AFK players which means actually being active to keep yourself logged in.

Previously the studio shared that they would be prioritising players who owned the full game and currently subscribed to handle the overload of players, but it looks like it wasn’t enough.

Hopefully Square Enix can solve the current congestion issue soon, as there seems to be a lot of interest since earlier this year when a lot of ex-WoW players decided to check out the game during a mass exodus and caused a lot of new players to flood the servers which is unprecedented. On the plus side the developers are being very vocal about the issue and updating the community constantly.

We’d like to share an update from #FFXIV Producer & Director Naoki Yoshida on the ongoing congestion, additional game time compensation, suspension of sales, error codes, and our upcoming plans. https://t.co/3WcXX6eVkf

As a newer player of FFXIV the experience has been the most interesting, especially for a game that is over a decade old. Garnering interest not only when a new expansion has been released but during the earlier half of the year. While I would recommend you try it for yourself, for obvious reasons you will need to wait until the hype dies down or a solid fix for server issues gets tackled. Final Fantasy 14 is now the most profitable game in the franchise, which is no surprise as it’s been one of the most long-running, but its continued success has been made more apparent this year.

It’s probably safe to say this will also put a temporary halt to any plans for new platforms for the game moving forward, as previously Yoshida had expressed he remains “positive” about the possibility of FFXIV one day coming to Xbox consoles.

Patch 6.05 is planned to be released on January 4th 2022 which will include the Pandæmonium: Asphodelos (Savage) raid.

In case you missed it the critically acclaimed MMORPG Final Fantasy XIV Endwalker makes our honourable mention this month, bringing the conclusion to the tale of Hydaelyn and Zodiark, a story that has spanned over many years. The expansion not only brings two new jobs, Sage and Reaper but a new level cap, two new zones Garlemald and the Moon, as well as the male version of the Viera.  You can expect battle mechanics, new challenges and a story that will hopefully blow fans away, containing more story and cutscenes compared to the Shadowbringers expansion. Check out other titles that releasing this month in Top 5 Upcoming RPGs Of December 2021.

For more news find it here in Dead Cells Next DLC The Queen And The Sea Releases January 6th 2022 and Diablo 2 Gets First Major Patch In 11 Years: Class Rebalances, Ranked Ladder And More.