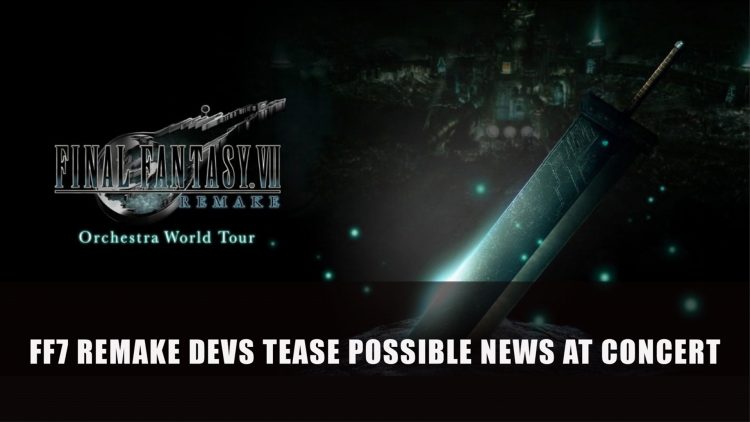 Square Enix may have something to announce at the Final Fantasy VII Remake Orchestra World Tour concert which is happening on February 13th.

The Final Fantasy VII Remake Orchestra World Tour concert is happening this weekend on February 13th in Japan. Square Enix has been sharing short video messages from the remake’s core developers on Twitter.

These included a message from Yoshinori Kitase who briefly introduced the concert and shared he’ll be watching from home. The next message came from Keiji Kawamori the music supervisor for the Final Fantasy VII Remake.

The latest message on February 8th gets a bit more interesting as it was from the co-director of FF7R, Motomu Toriyama who revealed a bonus talk show with the developers. He also shared that they will be giving some more info on FF7R, which could mean more news or an announcement.

You can find the subtitled version of the message below courtesy of the Twitter user Audrey:

FF7R Co-Director Toriyama’s message about the upcoming FF7R Orchestra Concert is VERY interesting. He mentions there will be a special small section of the concert where he will talk about some info about FF7R revealed only during the concert ?

Here’s the subs for the video! pic.twitter.com/YAZJAUufrK

The Final Fantasy VII Remake Orchestra Tour was first announced to be taking place in Los Angeles in June 2020. The Japanese dates were also announced but were later cancelled and an online version took its place, with a paid ticket system which will be streamed on February 13th.

The info may just be some further outlines of the direction of Final Fantasy Remake VII but we’ll have to see what news may be coming, whether this means a PS5 version or even a PC version.

For more news be sure to check out next, Mass Effect Legendary Edition Won’t Include Pinnacle Station DLC Because Of Lost Source Code and Disco Elysium: The Final Cut Extra Quests And Other Content Outlined.