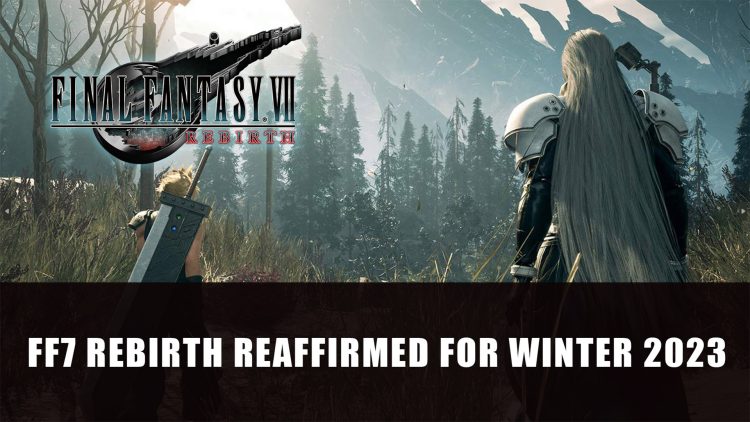 Square Enix reaffirms that part two of the remake Final Fantasy VII: Rebirth will be released in Winter 2023.

In a new tweet on the official Square Enix twitter account, the publisher shared all the upcoming games and recent releases. On that list, it included the second part of the awaited remake of Final Fantasy VII: Rebirth which still has the release window of winter 2023. The release window was first announced during the 25th-anniversary celebration for the franchise, which gave further details of the trilogy.

Next year will be a busy time for Squeenix as the first title for 2023 is Forspoken launching on January 24th 2023, followed by Theatrhythm Final Bar line on February 16th. After that we can expect another sequel, Octopath Traveller on February 24th. Later in the year Final Fantasy 16 in summer 2023, with FF7 Rebirth being released at the tail end of that year. Final Fantasy 16 has already been confirmed to be showcased at this year’s The Game Awards happening tomorrow. Whether there will be a short update for FF7 isn’t currently known but there seems to be a lot of announcements heading our way.

Previously footage shown of the game featured Cloud and Sephiroth or Cloud and Zack walking through the forest, with some opening footage with some dialogue from Aerith.

Want to treat yourself with a little holiday present or see what’s coming up in the New Year?

Check out these recent releases and future titles. What are you most excited to play? pic.twitter.com/81NWyOT9wy

For more news find it here in Diablo 4 Teaser Could Mean An Announcement At The Game Awards and Lost Ark Unleashes The Summoner’s Fury This December.