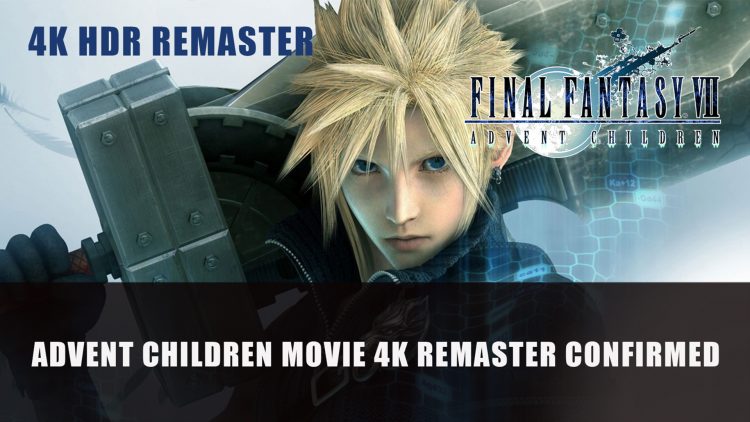 Sony Pictures Entertainment have confirmed a remastered version of the movie Final Fantasy VII: Advent Children will be releasing this June in 4K.

The CGI movie Final Fantasy VII: Advent Children which was first released in 2005 featuring a backstory of Sephiroth, Soldier, and more, has been confirmed to be getting a 4K HDR remaster releasing this June

Final Fantasy VII: Advent Children’s 4K remaster will be releasing on June 8th, two days ahead of the launch of the Final Fantasy VII Remake Intergrade and Yuffie DLC. Advent Children is set two years after the events of the game and gives fans a closer look at Sephiroth’s motivations. The children face being infected with an “unexplained disease” and it is up to one again Cloud Strife to come to the rescue.

The movie has a number of familiar names involved, being directed by Tetsuya Nomura and was written by Kazushige Nojima. It was also produced by Yoshinori Kitase and Shinji Hashimoto.

You can check out the first 10 minutes of the movie below:

You can find the official description of the movie below:

Continuing the storyline based on the hit Playstation game Final Fantasy VII, two years have passed since the ruins of Midgar stand as a testament to the sacrifices made in order to bring peace. However, the world will soon face a new menace. A mysterious illness is spreading fast. Old enemies are astir. And Cloud, who walked away from the life of a hero to live in solitude, must step forward yet again.

The movie releases just ahead of Final Fantasy VII: Intergrade which is an enhanced and expanded version of the remake that was released last year. The upgrade will not only come with improve textures and environments all in 4K but the addition of the Yuffie DLC (Yuffie Episode only available on PS5).

Final Fantasy VII: Advent Children will be releasing on June 8th on both disc and digital.

For more news find it here in Disco Elysium: The Final Cut Patch 1.3 Now Live On Playstation and Scarlet Nexus Gets Numerous Screenshots Including Costumes, Brain Map, Powers And More.