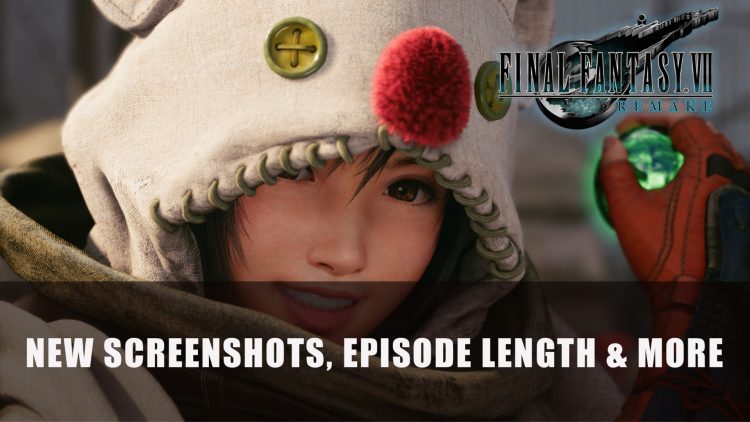 Last week Square Enix revealed Final Fantasy 7 Remake Intergrade on Playstation 5, and Yuffie Kisaragi. Now Square has shared more screenshots of Yuffie plus more about the character. Some of the new info was also shared on the FF7 Remake official English Twitter account. But also details of the length of the episode were shared by game industry insider Nibel.

Yuffie Kisaragi styles herself as both, but she’ll need to use all of her skills as a member of Wutai’s elite corp of ninja operatives to sneak into Midgar… pic.twitter.com/R8yLw1lzY0

Yuffie can be seen in the screenshots wearing a Moogle hood, and the info shared explains she will use her skills as Wutai’s elite corp of ninja to get into Midgar.

There’s also new details about Sonon, who was revealed in the trailer, who has trained under Yuffie’s father, and now sort of works for Yuffie.

Sonon trained under Yuffie’s father and harbors a deep resentment for Shinra, following the devastation caused by the war between Shinra and Wutai.

He has been assigned to work with Yuffie as she infiltrates Midgar – essentially making her his boss… pic.twitter.com/JMsnT2i7k9

As for how long the Yuffie episode will be, a Twitter post by Nibel shares that it will be two chapters. Currently the FF7 Remake is 18 chapters long. In this episode both Yuffie and Sonon are trying to steal the “ultimate Materia” from Shinra.

Episode Yuffie are two chapters; Yuffie and Sonon have infiltrated Midgar and plan to steal the “ultimate Materia” from Shinra

Yuffie is both good at close and range combat; on the field, she can use her shurikens to destroy boxes or perform “ninja-like actions” pic.twitter.com/cxy37XtuPC

Final Fantasy VII Remake is already available for PS4. The the PS5 version will release on June 10, 2021. The Yuffie episode is an add-on coming to PS5 only.

For more news be sure to check out next Pokémon Legends Arceus An Open-World RPG Coming To Switch In 2022 and Black Legend The Strategy RPG Launches March 25th.