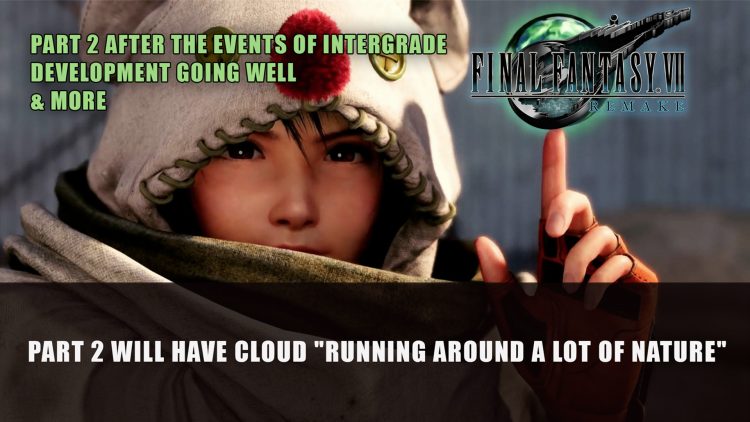 Square Enix have shared a little more of what will be happening in part 2 of the Final Fantasy 7 Remake.

The Final Fantasy 7 Remake was the first instalment for the return of the classic JRPG, concentrating on the Avalanche narrative, along with Shinra and the corruption of Midgar. While fans eagerly await Part 2, director Tetsuya Nomura shared a little of what’s to come.

During the official Final Fantasy 7 The First Soldier live stream, Nomura had seen how many people were asking about Part 2. In order to talk about the next instalment, Nomura shared it was a “huge mess” in order to get clearance to talk about it. The process from the sounds of it was rather complicated as getting approval from a number of departments was needed. This required approval from a number of departments at Square Enix in order for Nomura to divulge even the tiniest bit of info.

While it wasn’t a whole lot of details in terms of what Part 2 will entail, he did share that the atmosphere compared to Part 1 will be quite different, the story will be picking up where it left off from the events of Intergrade.

Intergrade was recently released in June, adding the PS5 version with the DLC called Episode Intermission. This added a new storyline following Yuffie, taking place during the events of Part 1 gaining a new perspective of the events.

You can check out translation by Twitter account user @aitaikimochi who summarises the stream as well as part of the interview:

Here’s my translation of Nomura’s full comment about FF7R Part 2, taken from the FF7 The First Soldier #0 Stream

Highlights:
-Pt. 2 starts right after the events of Intergrade
-Cloud will be running around in the wild, different atmosphere than Pt. 1
-Development is going great pic.twitter.com/uqf6IOPWWq

So far there is no release date for Final Fantasy 7 Part 2, but maybe we’ll hear more about the title at Tokyo Game Show happening in September.