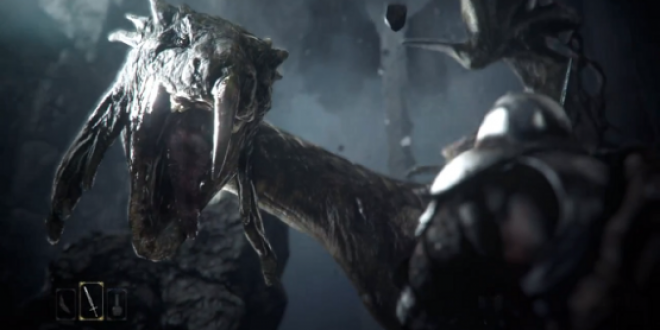 One of the upcoming games we’re looking forward to here at Fextralife is Capcom’s Deep Down, slated to be released on PS4 sometime next year.  Although not many details are yet known about the game itself, having watched all the footage I could get my hands on has me drooling already.

What we know so far

Deep Down is an action RPG created by Capcom’s Yoshinori Ono.  From what we can deduce of the story so far, it would seem some cataclysmic event occurs in the distant future, plummeting the main character (and presumably everyone else) into a modern day Dark Ages.  It would appear that part of the game is figuring out what happened and possibly restoring the world to it’s normal state.  Apparently the character has the ability to travel back in time through reading memories.

Early on in the gameplay trailers the game immediately strikes a stunning semblance to Dark Souls.  Anyone who has played it will notice the similarity right away.  The game is dark and ominous and the lighting, enemies, character movement and sound all feel like Dark Souls.  As you watch further into the trailer you can’t help but get excited about what’s around the next corner and how the hero will deal with it.

The combat mechanics seem to be some sort of hybrid between Dark Souls and Elder Scrolls: Skyrim.  There is an aim function as well, where the character switches from third person-over the shoulder view to first person to attack.  There are also what look like vials that can be thrown that create various effects.  This is surely the games version of magic in a sort of futuristic technology sort of way.

The game “randomly” generates levels, monsters and loot.  It’s not 100% randomized, since each level has to meet certain parameters, but everything inside those parameters is randomized.  The game will have frequent updates upon release to add new content (just like an MMO).

As far as I can tell, this is a PS4 exclusive title at the moment and we know that the game will support up to 4 players at once online and is being referred to as Free to Play.  The game will require a persistent online connection, but players will be able to play solo.

There will be a beta soon after the release of PS4.

What we don’t know

We don’t know how the RPG mechanics work, specifically, if there are classes, if you can level up and gain experience or if there are stats, etc.  Watching the trailers, you can see different characters with different gear (some is even a different color), but we don’t know if you can make gear, if it can be purchased or if it’s only found through dungeons.

We don’t know when specifically the game will be released, but it’s speculated that it will be sometime next year.

We don’t know how the multiplayer will work, specifically, how progress is saved, how partying up works and if the game world is persistent, if you can meet up in town with others and join a party.

It’s no secret that we here at Fextralife are huge Dark Souls fans (understatement maybe?) Deep Down has a similar look and art style.  From what I’ve seen of it so far, it has that same “what the fuck did we get ourselves into” feel that will give you that sense of accomplishment and pride when you do finally emerge from the dungeon victorious.

From a visual stand point the game looks graphically stunning.  Everything seems so real and the lighting is phenomenal.  I would draw comparisons to Skyrim, but it looks even better.

The sound and voice acting is right on par with what you’d expect from such a game.  It really brings it to life and pulls you into the environment of Deep Down.

Only time will tell if this is the next great game on console.  We are certainly going to be keeping an eye on it.  Here’s hoping come next year we have another great game to play, enjoy and get lost in.

You can preorder your copy of the game here.

8 comments on “Fextralife’s Most Wanted: Deep Down”