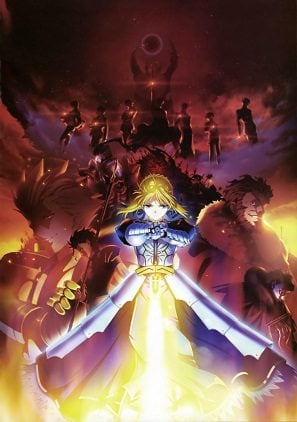 Reaperfan here!  I’ve been into anime for a few years now, and would consider myself pretty well-acquainted with the medium.  I’ve seen equally awesome, terrible, and awesomely terrible shows from all kinds of genres.  I’m here now to tell you about a little show called Fate Zero.

In an otherwise modern society, magic has been studied for generations by many families of mages.  A mystic artifact known as the Holy Grail is highly coveted by many of the elite mage families of the world as it is said that whoever owns it can have any wish they desire granted.  Getting the Holy Grail is no easy task, however.  Only a very select few mages are chosen to participate in the Holy Grail Wars, a competition of mysterious origin where only the victor is allowed to get the Grail.  When chosen to participate, a mage must summon the spirit of a hero to fight alongside them.  Along with this spirit and the powers they wield the mages must face off against each other and opposing heroic spirits, with only the last one left in the running able to claim the prize of the Holy Grail.

Things start off a little slow with the first episode being an hour long and used mostly to just introduce you to everything going on, but once it gets going it never lets its foot off the accelerator.  I’ve heard Fate Zero called “The Game of Thrones of Anime,” and I can see how the connection is made.  Personal grudges, political/societal disparity, and differences in ideals are just as prevalent to the tension this show builds as the obviously inevitable fight scenes.  Who wants what from the Grail?  Who will side with who, and are these people really who we think they are?  Just as much time is devoted to the character moments as the bombastic magical duels and it keeps you on edge the whole way.

I’ll start by saying there are a lot of characters.  A LOT of characters.  Between the mage participants in the war, their spirits, and unaffiliated associates and comrades, there’s plenty to go around.  To go into any of them in detail would risk ruining the development they undergo, and even to just list them off would likely be a paragraph in and of itself.

The show takes the stance of choosing to switch between everyone’s perspectives equally and never really settling on a “main character.”  Unlike other shows that do this though, Fate Zero never leaves anyone underdeveloped.  There may be large numbers of people involved but you will get to know all of them and genuinely see them evolve as the story progresses.  Not an easy feat for a series with only 25 episodes.  The connections between the mages and their heroic spirits are some of the most genuine interactions between characters I’ve seen and by the end you’ll find yourself having completely different outlooks on just who these characters are.  A few are given less development than others, to be sure, but there was maybe only one of them I would have considered underdeveloped, and even then I realize that’s just because I’m disproportionately attached to the character.

If there’s any problems, they’re again tied to the slow start of the series.  The first episode gets you introduced to the characters but not much more than that.  It takes a while to truly get a handle on who all is who, and I found the heroic spirits much more immediately memorable than their “masters” as it took me almost the first half of the series to really sort out who all the mages were.  As things pick up and character developments get stronger it becomes much easier to keep track of everyone though.

Fate Zero is just a beautiful show to look at.  Everything is fluid and expressive with some of the best incorporation of CGI in a 2D animated work I’ve ever seen.  The fighting is incredibly visceral to watch with no apparent spikes in quality you’ll find in other series where the production company dumps half of its animation budget into just a few short fight scenes.  Everything in this series stays consistent, and consistently beautiful at that.  There are a few times the CGI is noticeable, but even in those cases it’s really never intrusive to the experience.

From foreboding and ominous pieces for the mysterious moments, epic orchestral scores for the action, and quiet piano tunes for the emotional character moments, Fate Zero has music for everything and knows how to incorporate it.  The pieces themselves aren’t anything I’d listen to outside of the show but used in context they become quite effective.  The opening and ending themes are also all pretty solid, with the second opening theme being the most standout for me.