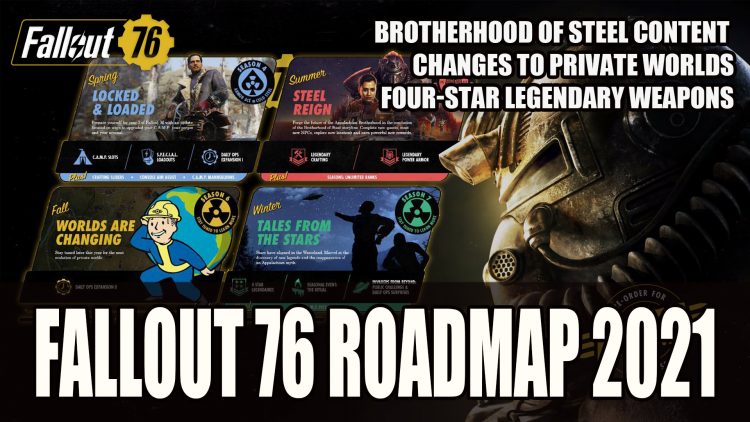 Fallout 76 content roadmap for 2021 has been unveiled by Bethesda, with a mix of content coming throughout this year. The next update launches this spring which comes with ways to respec characters quickly with SPECIAL loadouts and multiple CAMP configurations that players can switch between conveniently. The roadmap outlines what’s coming for the rest of the year beyond spring, and through to 2022.

In summer players can expect more Brotherhood of Steel content. The first update for Brotherhood of Steel was on the smaller side, but it introduced the various branches of the Brotherhood. Steel Reign is the next campaign to follow this, and it will be the conclusion of the campaign. There will also be the arrival of Legendary modules, letting players craft specific Legendary items instead of waiting for them to drop.

It will be in fall when Private Worlds will get “an evolution” according to the developer, but exactly what this means is still unknown. This hints are changes coming to private servers which was an option first introduced with the subscription service Fallout First. There will also be a further expansion for the Daily Ops system.

We’re excited for all the new features coming to #Fallout76 in 2021 and beyond: pic.twitter.com/yUf8FlAhQp

Lastly, winter will be when we’ll see the arrival of the four-star Legendary weapons and armor, along with CAMP pets. Players have been able to gain pets by using perks previously, but it has been quite unreliable, ending up with pets going missing or disappearing. The roadmap also mentions two events, one for the “Invaders from Beyond” and another to help assist the cultists of Point Pleasant in pulling off a strange ritual.

Fallout 76 is currently available on Game Pass for PC, console and via the cloud. This includes the campaign content for Wastelanders, Steel Dawn and upcoming Steel Reign for free.