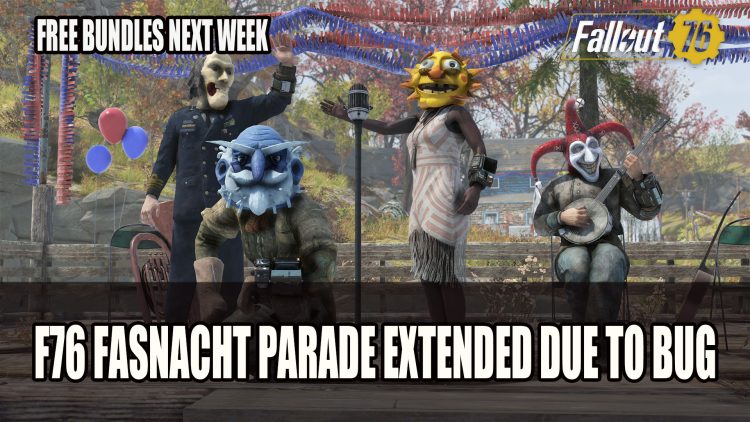 Bethesda announced there is now a bug fix for the Fasnacht Parade Event and next week they will be giving free bundles.

Fallout 76’s Fasnacht Parade event hit a bit of snag with bug that started causing some gameplay issues for players. However, Bethesda have now fixed the problem and will be extending the event.

Fasnacht Parade which first introduced to F76 last year in March has returned to the wastelands this year. In this event players are given objectives to complete as well as have the task of guarding the participants of the parade. But during this event there were some issues with critters not spawning correctly causing players to fail the objectives.

The developer Bethesda shared they did get reports initially for this bug on private test servers from playtesters, however when they tried to reproduce the bug internally they couldn’t. They determined this as an “…unrelated issue when we decided to move forward with the event.”

The event was then taken down, but reinstated the next day now with an extended end date of June 9th. You can also claim a free bundle from the in game Atomic Shop from June 2nd.

Recently Bethesda outlined a new roadmap with three updates releasing over each season. The first being in summer that actually introduces seasons to F76. The second coming in Fall called One Wasteland For All and lastly Fracture Steel which comes out in winter.

Fallout 76 is available on PC, Playstation 4, and Xbox One. The most recent Wastelanders add human NPCs to the game plus new dialogue and quests. Be sure to drop by our Fallout 76 wiki for all the latest info.

For more news be sure to read next Book Of Travels A Tiny Multiplayer Online RPG Launches October and Blizzcon 2020 Officially Cancelled, Virtual Event Most Likely Early 2021. You can also check out The Elder Scrolls Online Greymoor Launch Trailer.