We got a hands-on look at the upcoming Fairy Tail JRPG, getting a chance to play the game, experiencing the combat, attacks and some of its gameplay for ourselves.

On November 5th, I had the pleasure of visiting Koei Tecmo US in California to get a hands-on preview of Fairy Tail, which is now confirmed that it will indeed release in the Spring 2020. After playing the turn-based RPG for roughly an hour, and having the privilege of interviewing Keisuke Kikuchi himself (the producer of Fairy Tail), fans of the animated series will be delighted to hear that Gust is off to a great start with their RPG, planning to finish strong and bring new content within a few months after the game is released. Read on to find out what we thought of the game.

I started off playing as Natsu, but I could have just as easily switched over to Lucy or Erza, as you’ll start of with your squad of 3. However, there will be more characters that you can switch to once the full game releases (and more will come in a DLC), so I could hypothetically switch one of the main 3 characters out for Gray or someone else if I so desired. 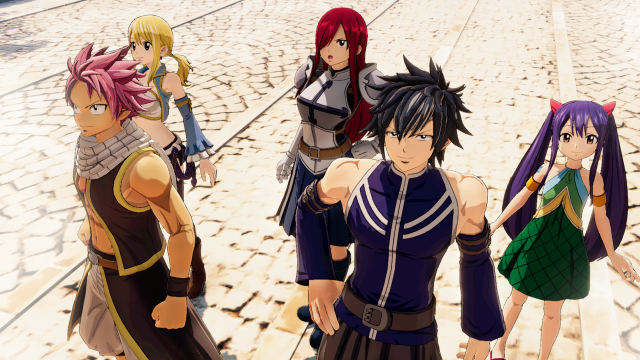 You set off your journey passing through Magnolia, your objective is to make your way to Akane Beach for some training for the Grand Magic Games. On your way to the beach, as you first pass through the town of Magnolia, fans of the manga series will absolutely love seeing this beautiful town fleshed out onto console. Everything is placed where you would expect it to be, making you feel like you are actually there, and this is where you really get that genuine Fairy Tail experience. I then ventured off from Magnolia to Boundary Forest, and from Boundary Forest to Akane Beach. 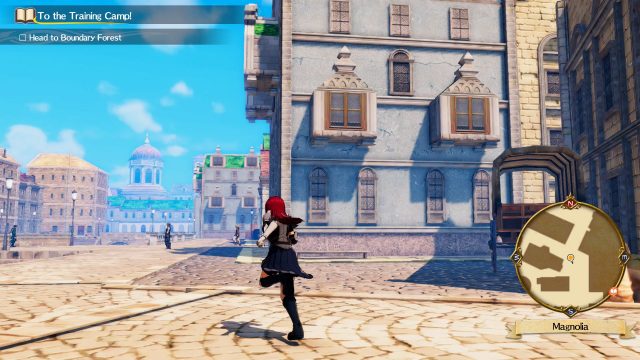 As I made my way through Boundary Forest, I ran into a couple of lvl 1 Harpys. The battles are turn-based and I quickly figured out that you’ll want to use magic that exposes the enemies weakness (ex. ice, fire, etc). It was my turn first (as it was through the entire demo up until the boss fight) to attack. I started with Lucy. Once I looked over her magical abilities, I immediately noticed that by summoning the Capricorn, I would do a decent amount of damage to the Harpys, being that this was a weakness to them. This is a key part of the game – to use the appropriate magical ability to exploit your enemies weak points. 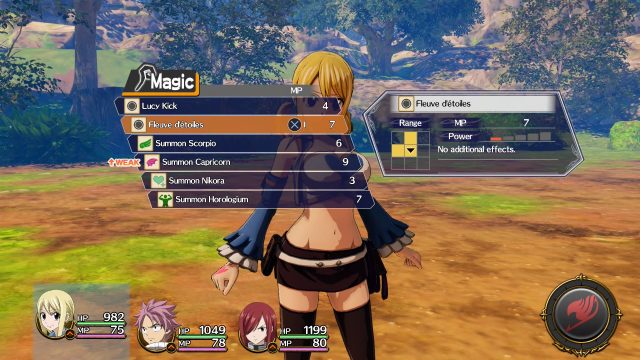 I defeated both Harpys in one shot, so I had to wait until the next battle to fight as Erza and Natsu. This time around, I fought a lvl 1 Harpy and a lvl 3 Golem. Erza and Natsu are very powerful, but from my experience, Natsu really brought the heat (pun intended lol). Back to Erza – she starts off with more HP than the other two and seems to absorb less damage in most cases, which did not surprise me one bit. Her Photon Slicer attack (magic sword spell) is rather iconic and it is very-well known amongst the fanbase of Fairy Tail. 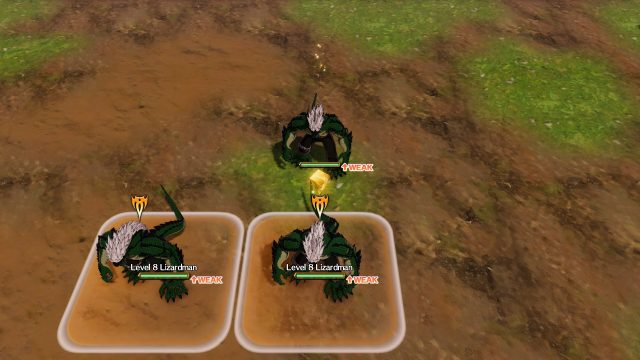 However, the Golem still had some HP left, so now it was time to use Natsu. The Golem was weak to Natsu’s fire attacks, so he really stood no chance. Not only did Natsu seem to be the most powerful of the bunch, but he was able deal damage with the biggest range amongst the 3. This meant he could cause more damage to enemies in one shot compared the rest.

The games combat is very easy to understand and simple to execute, so for fans of the series who might not have much experience with turn-based RPGs…fear not. Everything is laid out right in front of you! 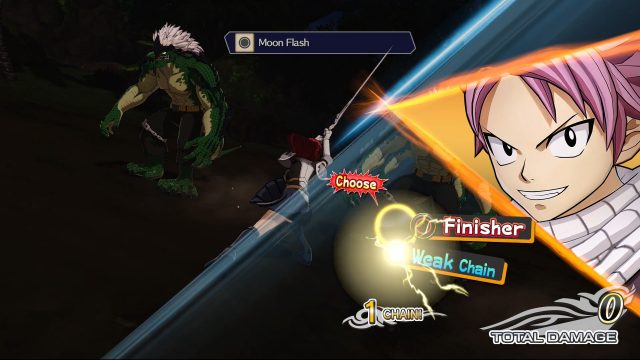 I was told that the legendary magic that we all want to see from the likes of Natsu, Erza, Gray etc, will eventually be available to you once you level your character up to a certain point. I was able to chain some attacks together between Natsu, Erza, and Lucy to perform a massive amount of damage. This was possible by filling up the Fairy Tail meter in the game.

You will be able to perform different chain attacks and cooperative moves the more you level up and most importantly, build upon the relations you have, with your those whom you are fighting with. Therefore, the more missions/quests you complete with your particular squad, the more chemistry you will build with one another, which will improve your overall performance in combat with your friends.

Towards the end of the demo, I got to partake in a boss battle against Jellal. Just before the battle, Ultear, who is with Jellal, explains that they’ve created an independent guild called, “Crime Sorciere.” They mention that they’ve noticed unusual magic every year during the Grand Magic Games and they want us to figure out what’s going on. Ultear says she’ll be paying the trio in advance and in typical Lucy fashion, she yells, “Rent money!” Ultear shares that it won’t be in Jewels, but rather her “Improved Arc of Time.” She speaks of something quite rare and that everyone has the potential to access it – The Second Origin, which means you can fight longer and have access much stronger magic. 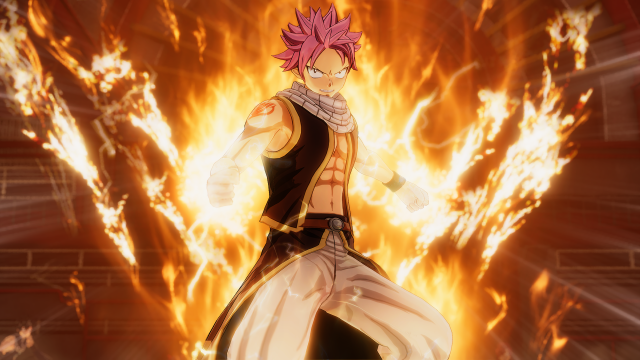 Jellal goes first and deals a massive amount of damage to the trio, leaving me to wonder if I’m going to win the battle. Now it’s my turn and Lucy and Erza become “Awakened,” because they took a decent amount of damage, therefore some of my HP has recovered and all my stats were increased for a “set amount of turns” – not bad. However, this will not always happen, so I assume some of my luck was due to this being in the tutorial part of the game. And it definitely came in handy, because Lucy would have fallen at least once if it were not for the Awakened bonus. 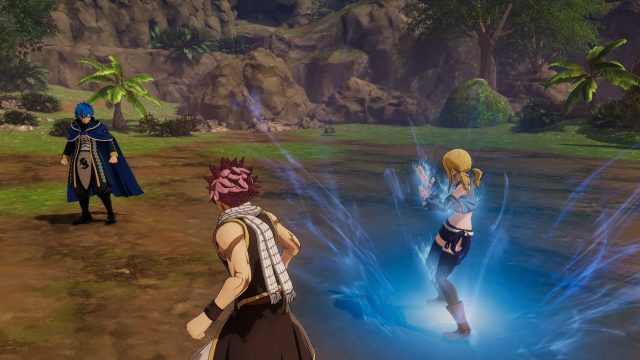 Once I got to Natsu, I got my first taste of experiencing some very powerful magic. While being Natsu, I could either choose “Lightning Fire Dragon Mode,” or “Dragon Force,” in which case I chose the former, than the latter in a different playthrough. Natsu led the charge in damage, which led to the demise of Jellal.

After we defeated Jellal the demo had basically come to an end. Each character leveled up at least once, which basically increases all your stats. Eventually this will lead to new unlocked magical abilities and then some. We look forward to seeing what cooperative magical abilities the Fairy Tail Guild will unleash as you progress and build your guild throughout the game. To get the full experience, you’ll definitely want to change up the characters you play as, giving you more unique magic abilities as you develop your friends’ relations with one another. 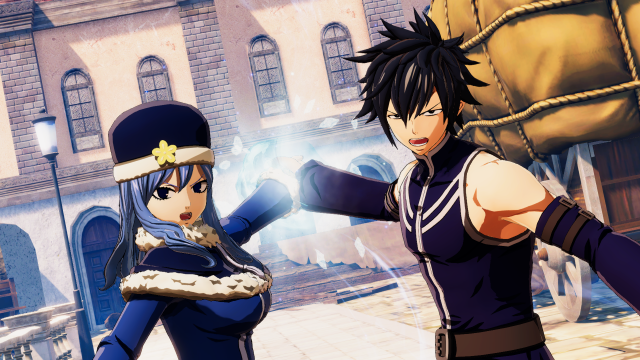 Being a fan of the series is a huge, huge incentive to play this turn-based RPG that arrives in the Spring of 2020. What will be interesting to see is how many newcomers will attempt to play the game without knowing much about the Fairy Tail anime series, especially in the midst of a busy spring next year. It is of my opinion that Fairy Tail will shine. Making its way to consoles has been a long-time coming, so to the naysayers, Gray Fullbuster has a message for you… “Your darkness….I will….seal it…”

Fairy Tail is set to release on Nintendo Switch, Playstation 4 and PC via Steam in Spring 2020.

If you enjoyed this preview be sure to check out more Fairy Tail content in Fairy Tail Game Gameplay Impressions – TGS 2019 and Fairy Tail Game Adds Gajeel Redfox And Juvia Lockser As Playable Characters.