Guring the Game Awards 2019, developer Counterplay Games and publisher Gearbox announced their new title: Godfall. Godfall is a third-person action role-playing “looter-slasher” game, and is confirmed to be a launch title for the PlayStation 5 which set to be released around Q4 2020. The game will also be coming to PC via the Epic Game Store at the same time. In this Everything We Know about Godfall article, we will go through all of the available information about the game and try to answer as many questions as we can.

Everything We Know About Godfall

Set in a new bright high fantasy universe filled with knights and magic; the world is split up into four realms: Water, Earth, Fire, Air . Then everything changed when the fire nation attacked…I couldn’t resist…that last part isn’t true, and if you don’t get that joke then you need to internet more.

In Godfall, players will take the role of one of the last remnants of the exalted Knight’s Order. Their main objective is to prevent the impending apocalypse and to preserve whatever is left of their world. The Earth and the Water realms were shown briefly in the teaser trailer, as well as the obelisk that connects them known as the Skybreaker Monolith. Apparently, more will be explained at the start of the game, but that is as much as we know of the story for now. 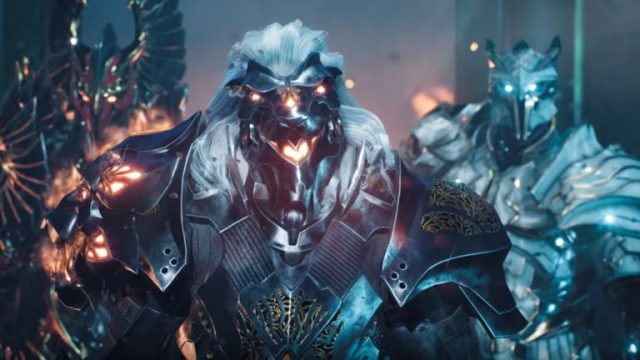 No gameplay was shown in the teaser trailer but everything we saw in it was rendered in real-time using the in-game engine. So it’s safe to assume the environment, those sweet looking armors, weapons, and characters we saw are all going to be available in the game. We did find 1 GIF of gameplay, and while the GIF doesn’t show much other than an awesome parry, we do see a small glimpse of what Godfall may play like, and it certainly does look pretty.

As said earlier Godfall is described as a “looter-slasher”, and it will have a heavy focus on melee combat, but players will also be able to use ranged attacks. Ranged attacks won’t be usable often, and will be limited by timers or cooldowns to keep the focus on the melee side of things. The game is all about close combat action, and players will have two primary melee weapons that they can switch between during battle. Godfall will offer a “wide spectrum” of weapons to choose from, ranging from small quick daggers to big and powerful great swords. 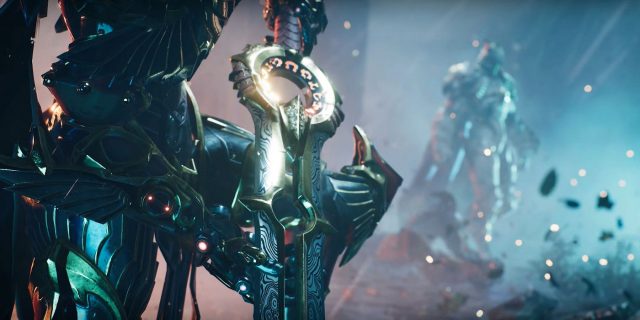 Players have three character classes to choose from, but they will be able to play all three classes eventually by acquiring and equipping the armor sets of the other classes, meaning the gear you wear will determine your playstyle, sort of like Remnant From the Ashes. Players will collect armor sets called Valorplate which will have slots to insert augments to create different kind of builds and playstyles within that style itself, sort of like a “Subclass”. 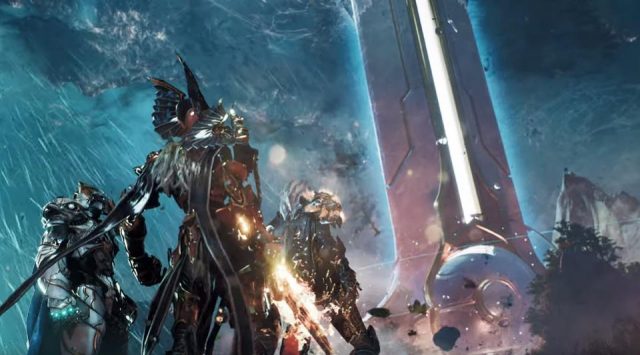 Some examples they offered are augments that heal you and your allies whenever you hit an enemy weak spot, or an augment that summons magic missiles that target nearby enemies and deals Area of Effect damage whenever you hit a weak point. This augment system reminds me a bit of the proc sets on Elder Scrolls Online, whereby special bonus effects, i.e. healing or summoning missiles, can only be proc after fulfilling certain requirements, in this case, hitting an enemy’s weak point.

Godfall is designed with co-op functionality in mind, and players can play solo, duo or join three-player co-op. The game features “hot-join” that lets players join games without needing to queue up and wait, which sounds a lot like Drop-in Drop-out functionality, but let’s wait until they explain it further before we jump to conclusions. All of Godfall’s contents can be played solo or co-op, and is accessible to all players regardless of their stats and level. I just hope that they don’t have the same matchmaking system as the Anthem had, because I remember seeing a level 3 “quick-played” into the last mission. While it was amusing, it doesn’t make for a happy player base…

Godfall is a loot-driven action-RPG focusing on third-person real-time melee combat. It’s basically like Borderlands without the guns, minus the cell-shading and looks a lot better. I can’t really explain it any better than that. 2020 is really shaping up to be the year of Role-Playing Games and Godfall is definitely one of the RPG we’re looking forward to.

Counterplay Games is still a relatively unknown studio with only one game under it belt, but is by no means a small studio. Counterplay Games is a 75 person team and they’re comprised of industry veterans, devs of many games such as God of War, Destiny 2, Horizon Zero Dawn, Diablo 3, Halo 5, Overwatch and many others. That alone should tell us the Godfall is a game worth keeping an eye on.

It’s pretty hard to say exactly when we’ll see more of Godfall, but I have a feeling that we will see more of it at E3 of this year (that’s the first time I’ve gotten to say this year in 2020). With the game being a PS5 launch title, I’m very very curious to see just exactly how the game will look and play. What sort of performance we’ll get, and what bar will be set for future RPGs on the console. If you’re an avid RPG gamer planning to pick up PS5 at release, I would think Godfall is an easy purchase. Regardless, we will bring you more coverage as new info releases so be sure to follow us, and keep an eye on our YouTube channel.