The Game Awards finally provided a release window for Amazon’s Survival Open World MMO: New World. In this Everything We Know About New World article, we’ll be sharing the broad strokes of what makes this title unique, and some details you might not be aware of!

Everything We Know About New World, Amazon’s MMORPG

The Setting of New World

The game is set in Aeternum, a “supernatural frontier” that attracts adventurers seeking for the source of eternal life, a mysterious substance called Azoth. As explorers arrive to its shores, they discover the “Corruption”, a malevolent force that twists and warps creatures and makes them hostile. These creatures are known as “The Corrupted” and are the main NPC enemies of the game.


Aeternum is no man’s land, and explorers compete for the meager resources as they strive to survive and find the riches that they came for. Thus, the game sets the stage for PvP and guild battles.

Overall, not much detail is known of the way quests are structured to make the story flow together, but the story should allow for both Solo PVE and PVP content, and promise to have quality writing delivered by veterans of titles such as World of Warcraft and Everquest. 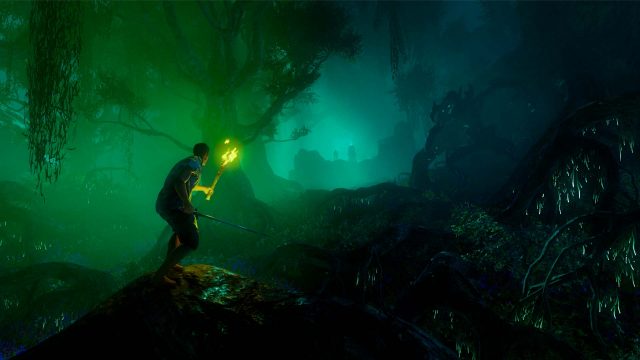 A first and rather salient point for me was discovering that the game will have no classes. Players can play and progress by mixing and matching their Weapon Mastery, Attributes and Tradeskills in the way that suits them. This is a departure from most MMORPGs but it is not unheard of in the realm of survival or exploration games such as Conan Exiles or Atlas.

The developers promise that the game will feature a deep crafting system, allowing dedicated crafters to create masterpieces and become renowned for their skills. Other character progression is done through the improvement of your specializations. Each weapon has its own skill tree, and you unlock progressive paths by using the weapon in combat. For attributes, your choices are determined by your desired role in battle. A Strength / HP focus is advisable for a heavy armored front-line build, but a caster will want to instead spend points in Spirit. And of course an archer or agile build will focus on dexterity instead. 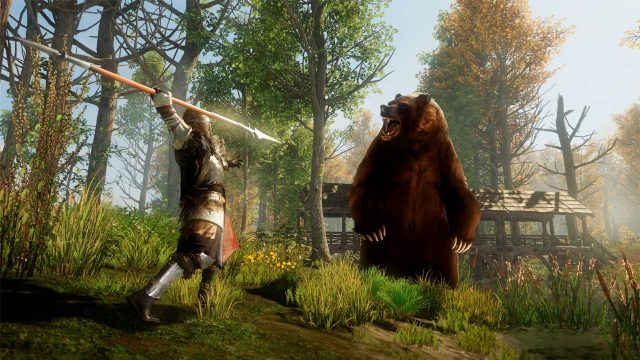 Combat in New World is not your typical mouseover and click affair. Inspired by action-rpgs, and specifically citing Dark Souls, players and monsters have collision and therefore your positioning vs that hitbox counts. There’s also weapon swap system via quickslots, allowing you to change weapons on the fly and giving further depth to combat. As expected from action-oriented combat, there are dodgerolls and critical statuses that allow you to deal (or take yourself) more damage.

You should not expect a hardcore action experience, but the developers say your skill will play a role in your success, and a skilled under-leveled player can win when facing a higher level but lower skilled foe. 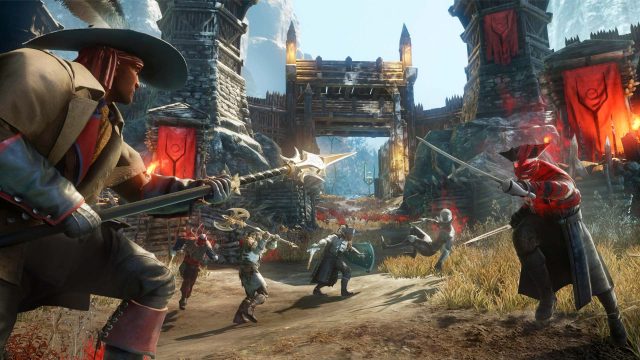 Taking over and controlling territory is an important aspect of New World. Players will band together in guilds and use their combined skills and crafting to build structures and advance their technologies. Boasting that “almost every tree you see can be cut down”, you’ll find servers hosting 1000 online players engaging in massive settlement building and then, pvp battles and even defense PvE battles.

Users can expect to see 50v50 pvp siege encounters, with siege weapons and explosive barrels destroying walls, that are then compounded by a surprise attack from The Corrupted. The overall interaction of player allegiances and Monster attacks is further enhanced by the game’s day-night cycle, that promises to change what threats are out on the landscape and when certain events can occur.

It is important to note that the game has a pvp on-and-off system, so players can opt into pvp if they want. There are also “Sanctuary” areas where no pvp is allowed, and players who kill other players without a “war” state going on will be branded criminals and part of a free-for-all much like Fallout 76 did. 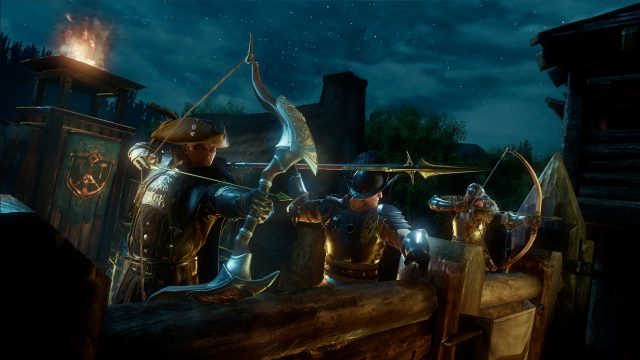 New world is therefore a very social game. You can be a lone wolf if you want, says Amazon, but it’s meant for you to join a guild, take a specialization (ranging from blacksmithing, to cooking or combat mastery) and put your skills to good use by contributing to your guild’s expeditions into unclaimed territory to harvest resources and build your settlements. You will have to defend those settlements from Corrupted assaults, and eventually other players as they try to conquer your town to claim its resources (or you theirs!).

Controlling territory isn’t just a color on the map. Controlling Guilds set and obtain taxes from the resident players, and if they abuse their populace of real players they’ll find themselves betrayed when another guild attempts to take over and is promising lower tax rates.

There’s even talk that the game may evolve to let you build walled cities, that will allow for the creation of remarkable crafting stations that the owners of the city may allow non-guildies to use as well. Allowing strangers into your city will not be as dangerous as it would be with a town, as your buildings would become immune to damage. 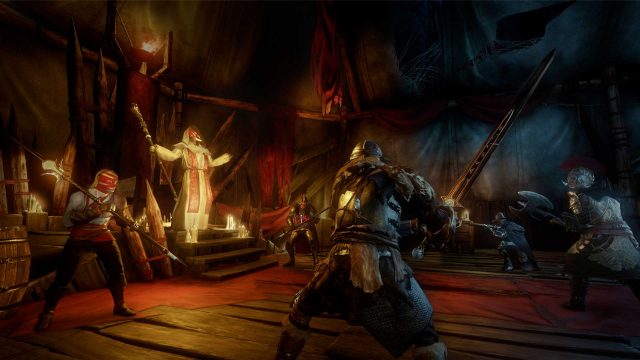 New World is a PC only game, and the developers say they have not considered a console release and are currently focused on getting the best possible performance out of PC instead. Intent on pushing the limits of what MMO graphics look like without bankrupting the audience, the minimum requirements are:

The Recommended Specs Are:

In terms of online and connectivity, Amazon is planning to leverage its incredibly powerful cloud techcnology and promises to keep servers with 1000 online players, and provide in-game voice chat. Language support will cover English (US & UK), Spanish, Brazillian Portuguese, Italian, French, German, and Polish at launch. 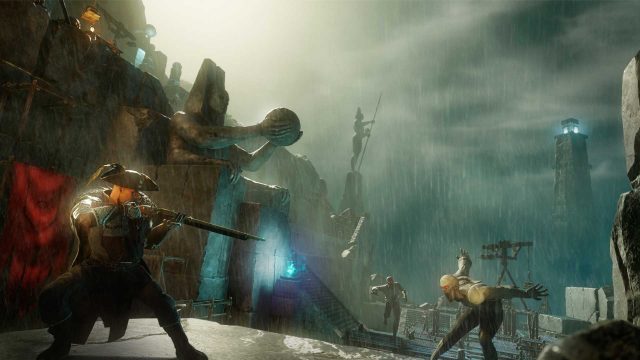 Monetization is a hot topic in gaming, and New World is doing what many other games are and offering an initial price (USD 40) for the base game with the option for microtransactions. There’s a 49.99 Deluxe edition that hints at what monetization will look like:

This would make it seem as if add-ons are likely to be skins, pets and emotes – not dissimilar to what other games do and overall not a deal breaker if you don’t have to be at the latest fashion in every game. The developers were asked about monetization, and this was their answer:

We’re going to monetise as just premium—so straight up you pay a flat rate, come in and join the game, it’s a live service. As it expands, you’re in that community. We are going to have microtransactions in the game, but no loot boxes, no pay-to-win, it’s all just like additional vanity content.

New World is shaping up to be a beautiful Sandbox MMO, with the promising stability of Amazon Cloud as its backbone. While other survival games such as Fallout 76 or Conan Exiles limit the server experience, having 1000 players inhabit and develop a server should provide a truly unique feel and cater to those wanting to create lasting settlements and alliances.

The recent addition of more traditional MMO elements such as questing, events, community goals, objectives and missions – giving “alone in a crowd” possibilities for the anti-social in all of us makes the game interesting for solo players as well, even if in a lower capacity.

We’ll be looking forward to the closed beta coming up soon, which you can get if you pre-order the game, and update you on how the game is shaping up before release! 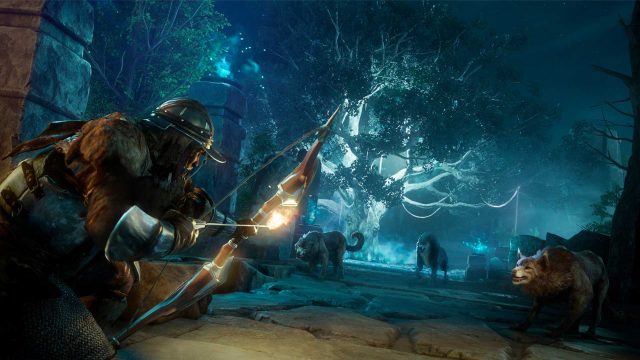 If you like MMOs and survival games, you might want to check out Atlas, Elder Scrolls Online and Fallout 76!

One comment on “Everything About New World, Amazon’s Atypical MMORPG”