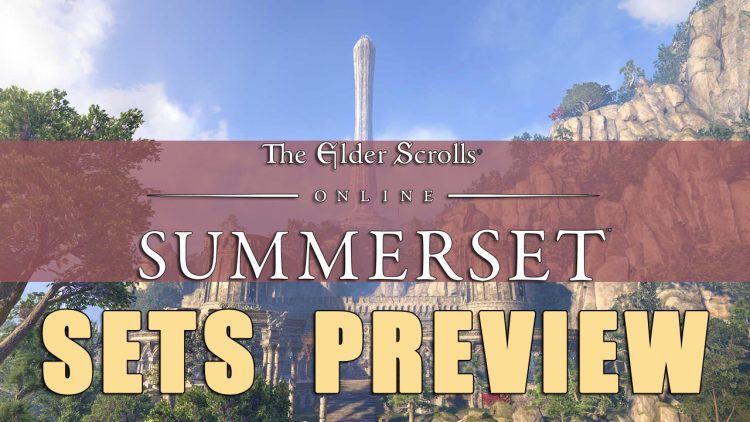 Earlier this week we got an in depth look at what Elder Scrolls Online Summerset will hold in store for us, as the Public Test Server (PTS) version went live on Monday. Although this is not a finalized version of the upcoming expansion, details like Sets and itemization rarely change much before live release. This means that what we see now will be ~90% accurate, and at the very least give us some insight into what we’re looking at in May.

Note that May 16th, a few days ahead of the launch of Summerset, we tested several of these Sets again and found Zenimax actually made huge improvements to some of them! This is exciting and we have shown the old version and the new and improved version in such cases. Since we are just a few days away now, these are likely the final versions of these Sets.

ESO Summerset will feature 10 new Sets. 3 Crafted, 3 Dropped and 4 new Trial Sets. In addition some changes have been made to existing Sets that are worth mentioning, and I will do so later in the article. If current trends continue we can expect 2 new Monster Helm Sets with and 6 new Dungeon Sets with Update 19, which should bring 4-man Dungeons to the region. But for now, let’s dive into the ones we can get our paws on. 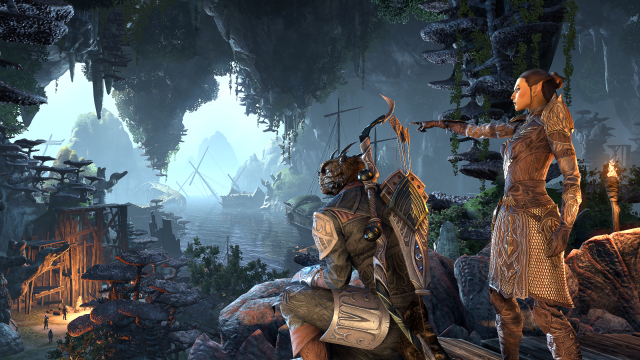 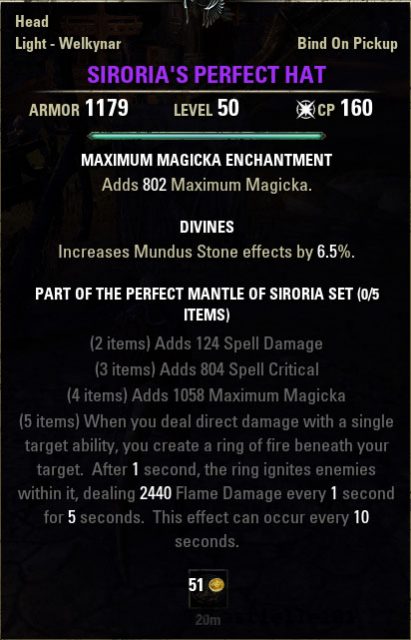 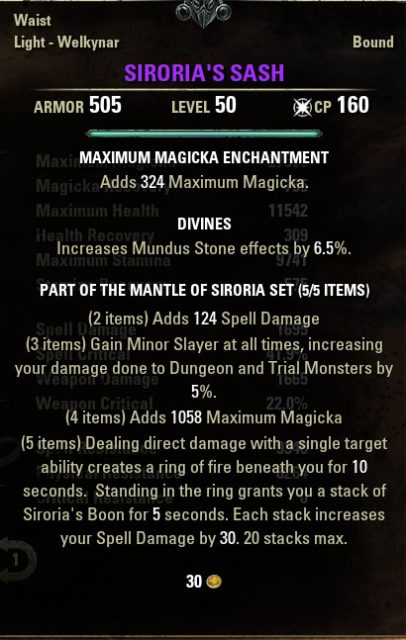 This Set was changed from the original version, which used to do Flame Damage in an AoE. The new version casts a circle on the ground where you are standing when you do direct damage, and you gain a stacking Spell Damage buff as long as you remain inside of it, and for 5 seconds afterwards. You can step out and back into the ring to further increase your Spell Damage, however the ring will vanish after 5 seconds. This is great for stationary fights, but will be difficult to use if you must move often, which is the case a lot of the time.i

You can see the size of the area in which you must remain above. It’s not super large, but it’s not terrible either. 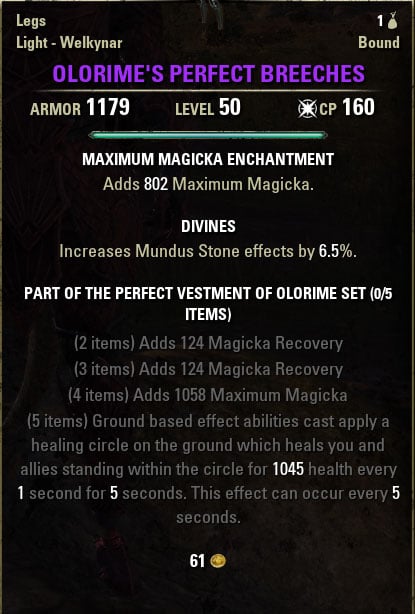 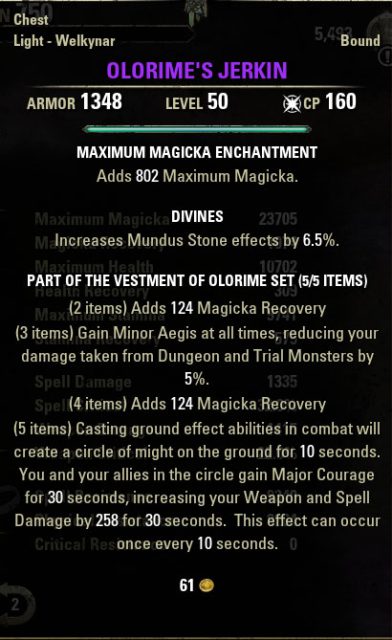 This Set was also changed from the original which previously gave healing. The Spell and Weapon Damage matches that of Spell Power Cure , but the two cannot be stacked as they now both provide the same buff called Major Courage. The beauty of this Set is that the buff lasts 3 times as long and your teammates don’t need to be in the AoE initially, but have 10 seconds to run through it, at which point they gain the 30 second buff. They don’t need to remain in the circle either, as the buff lasts even after they exit. This is a big upgrade over Spell Power Cure, and will likely be paired with Worm’s Raiment for best results. 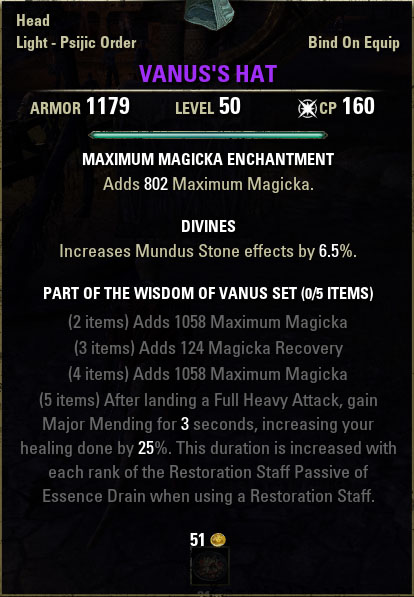 This Overland Set can drastically increase the performance of healer by doubling the time Major Mending lasts after a Heavy Attack. Again, PvE healers don’t generally have an issue with a lack of healing, so this probably won’t effect the meta. However, it is still an excellent Set and will work for new players or 4-man PUGs. It also has PvP implications because you can’t ever have enough healing in Cyrodiil or Battlegrounds, and almost rewards a player for stacking Magicka instead of Magicka Recovery. 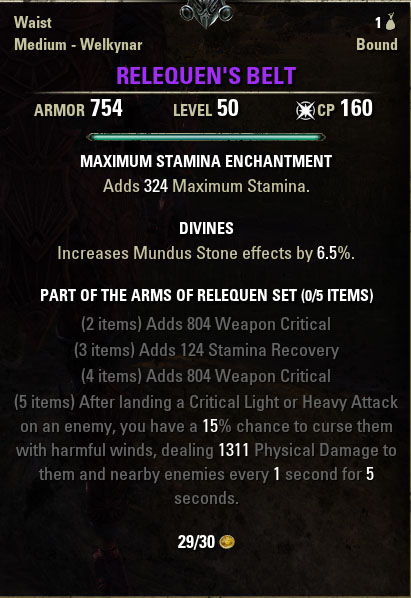 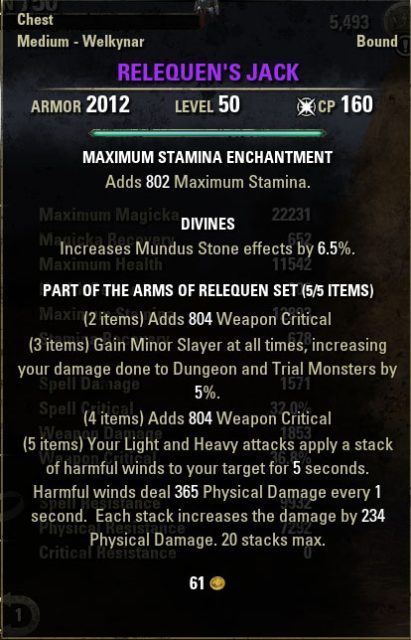 This Set has change on PTS, and now has different bonuses from the original, which were horrible. The addition of the Minor Slayer as the 3 piece bonus, and the complete overhaul of the 5 piece make this set substantial for Dungeon and Trial runners, when fighting bosses or enemies with large health pools. You can have the DoT on more than one enemy at once, however, the Forceful passive from the Two-Handed Skill Line will not allow this to apply to other targets. This will be a competitive Set for sure. 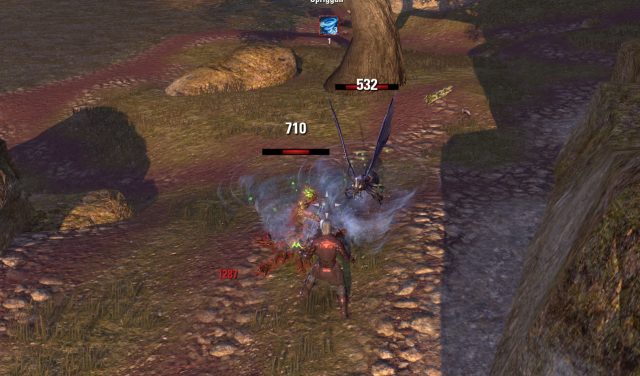 You can see the DoT looks like a small whirlwind on each enemy affected. 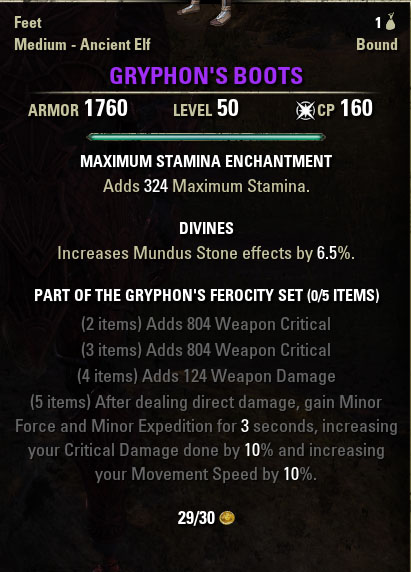 I actually really like this Overland Set. It’s not going to replace any meta Sets in PvE, but in PvP it’s going to become a staple of many Builds, Nightblades in particular. Why? Because it allows you to circle around players quickly, putting yourself in a position where you can strike them and they cannot hit you. Add in some sort of snare to your rotation, the new Swift Trait on Jewelry that increases Movement Speed, and you have yourself a good combination or success. It also increases your burst damage and has no cooldown, so there’s also that too. 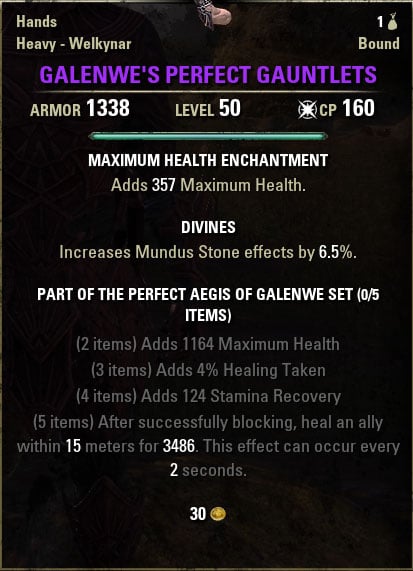 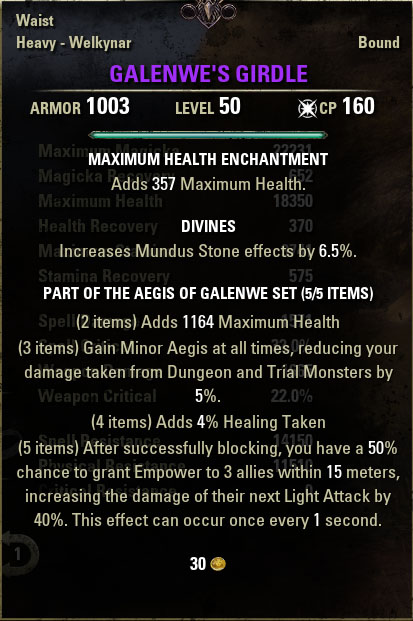 This is another Set that was changed on PTS from the original and now is much more suited for Trials or Dungeons. The addition of Minor Aegis really helps, and increasing the damage of your teammates’ Lights Attacks is a great boost in DPS, especially since it can occur once every 1 second. I fully expect this to become a Meta Trial Set, and will shine with groups who excel at weaving Light Attacks into their rotation. 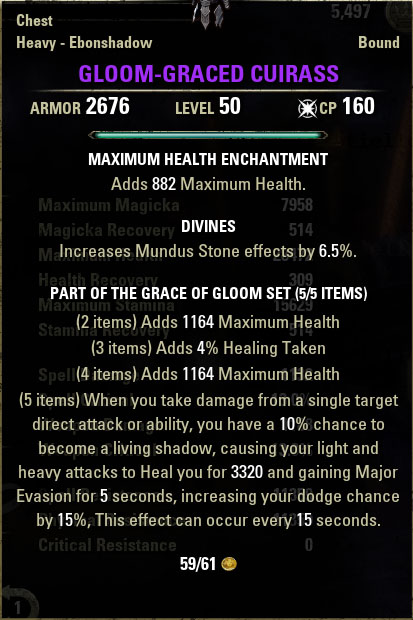 This Overland Set is another one that seems really good at first glance, but isn’t as great in practice as it is on paper. This Set should shine when you are surrounded by many enemies, such as some of the harder trash pulls in Dungeons or Trials. However, there are really a couple of issues that prevent that from being the case. First when surrounded by a ton of enemies you aren’t going to let go of Block to Light Attack heal for 3300 ish Health, because you’ll probably take more than that in damage, which is a net loss. Second, the 10 second cooldown after it procs means that you won’t get probably more than 1 or 2 procs during a pull, which isn’t all that great. I fully expect this to be buffed before live release.

This Crafted Set gives you Major Evasion while riding…yep…while riding. I’m honestly not sure what to say about this Set as it has almost no use anywhere. I guess you could ride around on your Mount and round up a bunch of mobs and then hop off and AoE them if you really wanted to…but why would you want to? I’m really hoping this Set gets changed before it goes live or no one will use it. 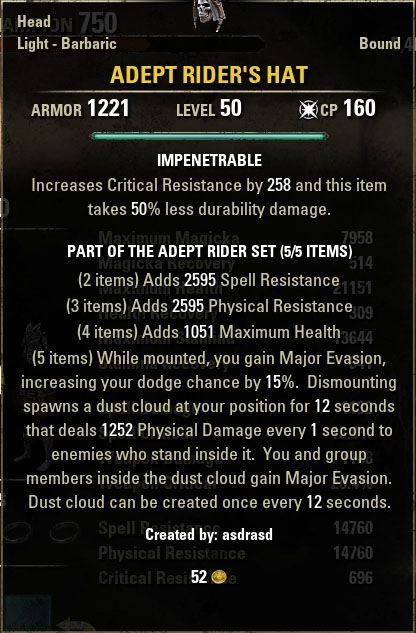 This Crafted Set deals damage over time, and Oblivion Damage too, which is nice. Unfortunately that damage is way too pitiful for anyone to actually take it seriously and this will become another Set that won’t see much use unless changed. It’s a good concept, but it need some rebalancing. 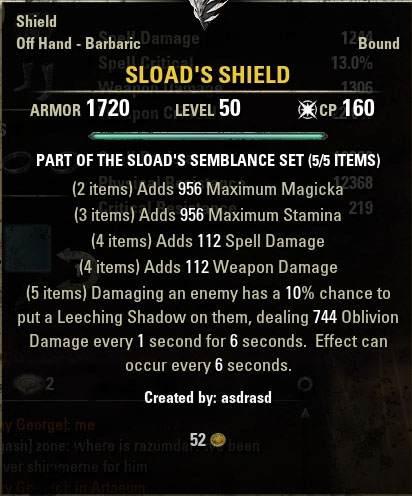 This Crafted Set is light years above the 2 others in terms of functionality. Tanks can easily use this paired with Evasion, or a Set that gives Evasion, for some easy self heals. It’s not good enough to replace the current meta, but it’s certainly useable. In addition, because it can be made in Medium, we will see many more Stamina Builds rocking this out in Cyrodiil to get easy heals while they Dodge attacks. I’m not looking forward to dealing with that… 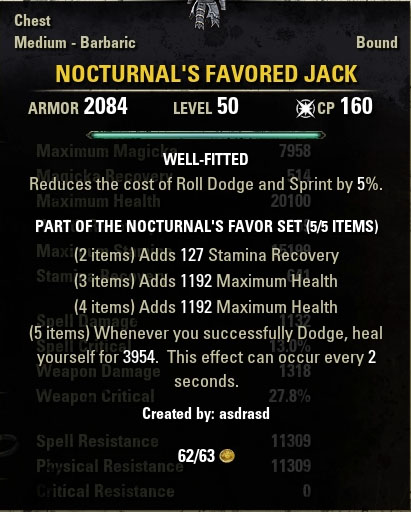 Night Mother’s Gaze – This item set now applies Major Fracture to the enemy when you deal Critical Damage, instead of reducing their Physical Resistance by 2580. This makes this much less effective as a Set as you can only apply Major Fracture once.

Jorvuld’s Guidance – Fixed an issue where this item set’s bonus was not increasing the duration of Major Slayer or Major Aegis. This means that it will now become a meta Set for Trials and Dungeon Healers!

Shroud of the Lich – Fixed an issue where this item set’s proc was not increasing your out-of-combat Magicka Recovery. I’ve been waiting for this to be fixed for a long time… 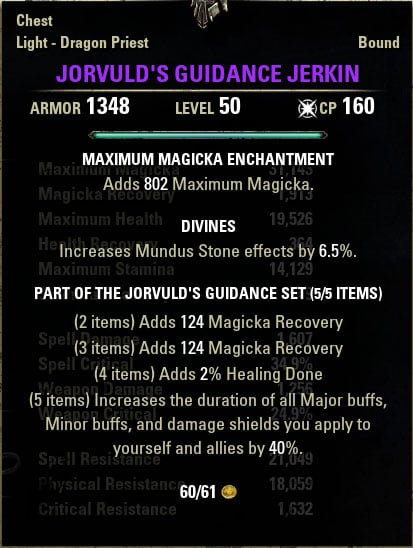 This set will now affect Major Slayer and Major Aegis, making it one of the best Sets in the game for a healer.

Overall I’d say there are some definite upgrades to be had here, and Zenimax has changed what was a lackluster group of Sets into some very interesting and powerful versions, particularly the Trial Sets. If they continue to listen to feedback from the community, which clearly they have here, it will go along way towards extending the life of ESO. I’m excited to think about using some of these new Sets soon, and am really hoping we will see more of this moving forward with future Updates!

Stay tuned for more ESO Summerset coverage through April, May and June!