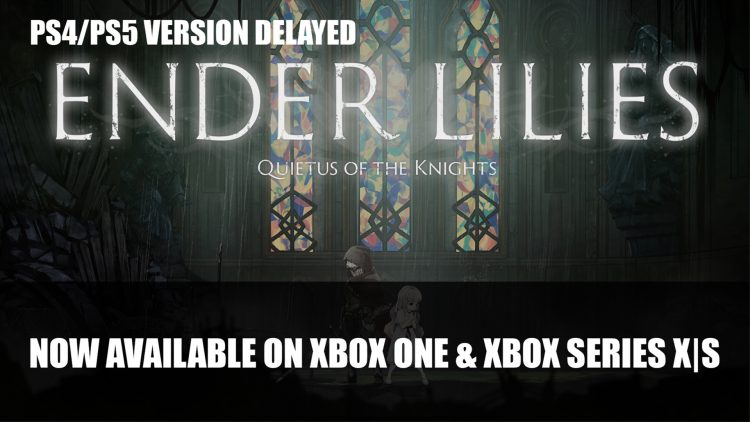 Publisher Binary Haze Interactive and developer Live Wire and Adglobe have announced the indie Action-RPG Ender Lilies: Quietus of the Knights is now available for Xbox Series X|S and Xbox One.

Ender Lilies: Quietus of the Knights Now Available on Xbox Series and Xbox One; PS4 & PS5 Version Delayed to Q3 2021

Ender Lilies: Quietus of the Knights is a 2D Action-RPG which has now launched on platforms Xbox Series X|S and Xbox One. Developer Live Wire and Adglobe, along with publisher Binary Haze have announced that the title will be coming to Playstation 4/5 later than the planned release date of July 6th. The launch date for PS4/PS5 is now delayed to Q3 2021, due to “unexpected technical difficulties”.

If you have yet to pick up the 2D side-scrolling action-game, Ender Lilies first launched on Steam Early Access back in January 21, and fully launched on PC and Switch on June 22nd. The game mixes rogue-lite elements with souls-like mechanics, with a number of abilities you can pick up from the Spirits you encounter.

Due to unexpected technical difficulties, the PlayStation 4/5 version of ENDER LILIES is now set to launch sometime in Q3 2021. We will make a new release date announcement ASAP. Thank you to everyone waiting so patiently, and our apologies for the inconvenience. ?‍♂️ #EnderLilies

Ender Lilies: Quietus of the Knights is available on PC, Switch, Xbox One and Xbox Series X|S.

For a rundown of recent RPG news find it here in Top RPG News Of The Week: June 27th (Fable, Salt And Sacrifice, Cyberpunk 2077, And More!).