A recent announcement that Electronic Arts has partnered with Microsoft and the Xbox One to create EA Access, a new subscription based approach to game distribution, has more than a few gamers wondering whether this is the start of a new direction in the industry.  The service will cost $5.00 per month, or $30.00 per year, and gives the subscriber access to a number of specific EA titles free of charge, much like both Sony and Microsoft do now PS Plus and Xbox Gold. In addition, subscribers receive 10% off all DLC content from EA and early access to new games, allowing players to enjoy the first two hours, and then continue without having to install anything the moment launch date arrives. The first four games announced to be part of the subscription are: Fifa 14, Madden 25, Peggle 2, and Battlefield 4. More games will be announced later.

Essentially, what these companies have done is create something akin to a Netflix model for game distribution. For anyone willing to wait 6 to 8 months into a game’s release, they can play it for what amounts to an extremely low fee. This bold move isn’t surprising, considering that even EA must realize how quickly the value of these annual games drop as the next one approaches. Yet, for casual players who do not drink the Kool-Aid every year, these titles represent incredible value-added content that neither Sony nor Microsoft’s premium membership can offer, especially when considering that sports titles have high value in the first year, but after two year become worthless since EA shuts down their servers.

EA has a massive number of IPs in its stable, including Bioware’s Dragon Age and Mass Effect franchises, as well as Battlefield, which seems to have become a yearly release. EA has never been subtle about its strategy for getting games into the hands of players, then trying to hit them with microtransactions to increase the revenue base. Their reputation is the source of much scorn from gamers, and earned them awards for “Worst Company In America”.  As a gamer, the nickle and dime strategy annoys me to no end.  But here’s the rub:  from a business point of view, the microtransaction strategies are quite genius.

EA will only get away with what the market allows them to.  And what they do is target the competitive nature in people. Many of their games offer shortcut unlocks of online booster packs or gun kits. One can only imagine people rage quitting from NHL 14 or Battlefield 4, then making an impulse purchase of $50 worth of upgrades, convinced that the reason for their pwnage was being gimped by slow leveling. Getting the games into the hands of casual players after everyone else has maxed out their online profile will only increase the chances that someone will splurge on the “discounted” unlocks.

While some will scoff at this program, I’m trying to see the glass as half full.  I see the greed behind EA’s business practice, but I also happen to enjoy some of their franchises.  I love a variety of games, including sports, racing, shooters,  and RPG’s.  EA has at least one in every category that I enjoy.  Casual gamers who can’t afford everything that comes out now have a chance to sample some top shelf titles after waiting for them to gather a bit of dust.  I have friends who enjoy playing the NHL franchise, but we don’t always like to support EA’s gouging of fans for a re-skinned copy of the same game over and over.  This subscription offers a chance for everyone to get the game well after launch, and play as a group, for next to nothing. 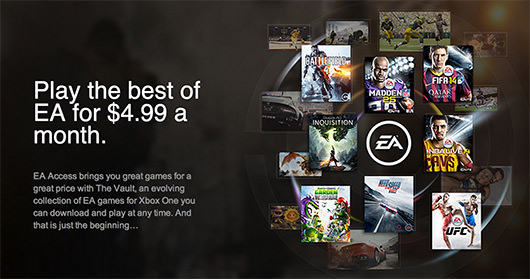 It is also interesting to note that Sony decided to double down on PS+ and declined to be part of this new program. EA offered it to both companies, rather than just Microsoft, but Sony seems reluctant to let EA horn in on the PS+ model. Whether this is the right decision remains to be seen, and Microsoft, which is known for playing the long game quite aggressively, now has something else to distinguish itself from its main competition.  A spokesperson from Sony was quoted as saying “We don’t think asking our fans to pay an additional $5 a month for this EA-specific program represents good value to the PlayStation gamer.”  Whether PS4 owners will appreciate not being give the option is another story.  I suspect it has more to do with Sony not being a fan of EA because of their exclusive deals with Microsoft.

A deal like this may potentially be a turning point in gaming, ushering in a whole new model that will evolve over time. Or it may fizzle out in six months and be forgotten. Purists may turn up their noses at the buffet-style of distribution this represents, but if I’ve learned one thing in business over the years, it’s that your best opportunities for success often mean catering to the lowest common denominator. If the unwashed masses embrace Netflix-style game subscriptions, then that’s the direction the industry will take. Critics may rightly point out that this creates a homogeneous framework that can stifle innovation and creativity on some levels. And while this is true to a point, small studio game development will always exist in the same way indie filmmaking exists outside the Hollywood and Netflix world.

For the price, it’s hard to argue with the subscription model they’re proposing. $30 for a year. Think about that. Half the price of a new game. For a year. Even if you only find one you like, it’s paid for itself. Naturally, if you despise everything that EA puts out, you probably should have stopped reading a couple of paragraphs ago. But personally, I’ve enjoyed my share of their games, and would have no problem getting my $30 a year back.

At the end of the day, we all have our favorite titles that we’ll buy at full price on day one. And some of us tend to play a small number of titles for long periods of time. But for those of us who like to try a variety of games when given the opportunity to play them at a discounted price, EA Access may be the solution we’re looking for. It may be buffet-gaming, but I’m up for anything that lets me sample some variety in the hopes that I might grab a gem.