Elder Scrolls Online’s Wrathstone DLC is coming in February, and was released on the Public Test Server less than 48 hours ago. In addition, Zenimax has released patch notes for this test version of the game, which gives us some insight into things to come. Let’s dig into these a bit and see what new and veteran players can look forward to. The Racial Passive changes alone are huge news, and are particularly interesting.

The first thing we’ll cover here is the two new Dungeons added: Frostvault and Depths of Malatar. Frostvault is a long-lost Dwarven ruin buried in a thawing glacier, where the Dwarves secreted away an object of immeasurable importance. Within the complex, a massive vault holds a piece of the legendary Wrathstone, a tablet carved with mysterious and arcane writing. Depths of Malatar is the wreckage of an Imperial fort built to plunder Ayleid ruins on the Gold Coast. Believed to be abandoned after its destruction in an unnamed calamity, your search reveals a terrible secret—the Imperials never left. 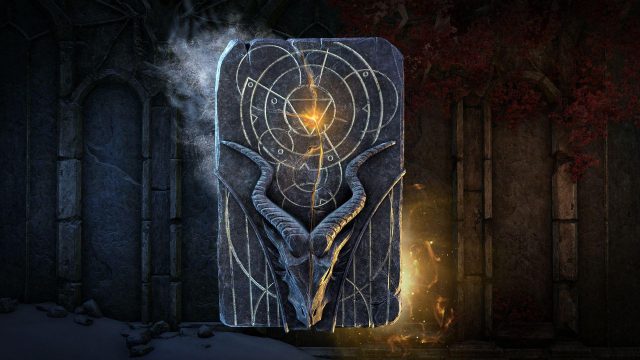 With these new Dungeons of course come brand new Sets, including Monster Helms, so let’s have a look at what these are!

Some of these Sets are frankly outstanding, and Scavenging Demise looks to be a must have Trial Set for Stamina Builds because it places Minor Vulnerability on the target for 15 seconds, which increases total damage taken by 8%. Icy Conjuror looks great for Magicka PvP, as you can push the tooltip all the way up to 30k damage if you are a Warden. Stonekeeper is excellent for new tanks or “perma-blocking” builds in PvP, and Frozen Watcher allows you to debuff enemies and deal damage while just holding Block. Lastly, Symphony of Blades might be the most powerful Monster Helm Set we’ve seen to date, as it will give the healed target effectively 1550 Recovery over 18 second. That is staggering and I fully expect that to be nerfed by about half before reaching live.

Buffer of the Swift

Deadly Strike is making it’s way into the fold, getting an additional 2 bonuses, and ones that are quite good (Werewolf anyone?). Curse Eater allows you to remove negative effects through healing, which is really really good. I can see healers running this very frequently out in Cyrodiil, but probably even more so in Battlegrounds. There are some great healing Sets to compete with, but this one will certainly do that.

In this Update all 10 Races have seen their passive Skills been updated or changed. The following is a list of just what these are:

These are some serious changes to the Racial Skills in the game, and none have ever been this prolific since the game’s inception. Many Races got better in some ways and worse in others, but overall I’d say the difference between Races feels more distinct. For instance, you can actually Tank with a High Elf now, due to Stamina return if you want. I’ll be diving deeper into these in a later guide, once they are finalized.

The current Champion Point cap of 810 will not be increased with this Update, or, for the foreseeable future. Rich Lambert stated in Zenimax’s recent developer live stream that they are re-evaluating the System and have put the cap increase on hold while they do so. What this means for the game is anyone’s guess, but I have put together an article on just this subject, which you can check out here.

Eld Angvar features two different maps split between the game types and certain parts of the map are available or closed off depending on the game mode groupings as described below:

The sheer number of things to do in each zone in ESO can be daunting. To help you find and complete more content in each zone, Zenimax has implemented a new Zone Guide feature. You can access the Zone Guide from the Group & Activity Finder on PC (P key by default), from the announcement panel, or from any overland zone map. From here, you can see up to 4 featured achievements for the zone along with your completed and uncompleted activities for the following:

The Guild Trader Interface has received a number of changes and new features in this update:

All pets will now inherit your bonuses and derived stats. This means your Critical Hit Chance, Critical Hit Multipliers, Champion Points, and other % damage or healing amplifications will be applied to any pet you summon. Item sets that summon pets will continue to not inherent your Critical Strike Chance.

Enchants on one handed weapons will now be half the potency of those placed on two handed weapons. This will apply to the damage and effectiveness of enchants, but will not affect the cooldown.

Abilities that provide Major Buffs that are not associated with healing or damage will now apply to a maximum of 12 targets. Below are the following abilities affected by this change:

Overall there are some pretty significant changes to the game, but certainly less than past Updates. There are no major Skill changes when it comes to Classes, so I didn’t include them here, and most Classes will remain nearly exactly the same.

The crown jewel of this Update is of course the Racial Passive changes and the announcement of no future Level Cap increases for the game. I’m excited to see how these Race changes play out, and Zenimax has said they will grant one free Race Change Token to each account when they go live in February. As I am a High Elf, I doubt that I will change mine, but you never know. These changes are not yet finalized, so their final versions may be somewhat different, and I’ll be covering these more in depth when they are.