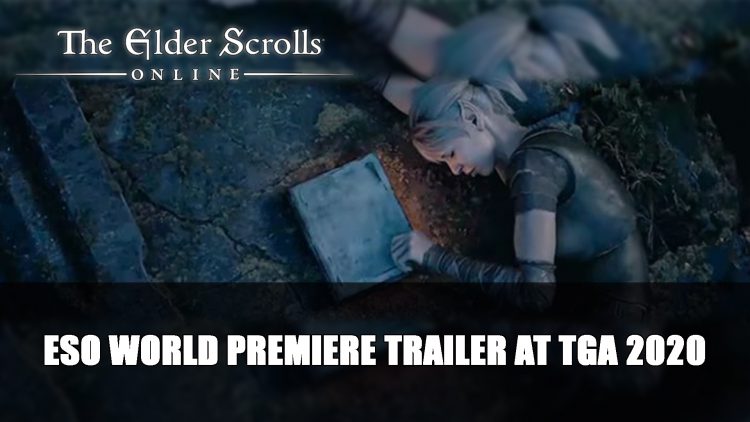 Zenimax are teasing a new trailer for the Elder Scrolls Online which will be premiering for the first time during The Game Awards 2020.

In a tweet on the official Elder Scrolls Online Twitter account, Zenimax have shared a world premiere will be happening at TGA 2020. The trailer will be shown for the first time previewing of what’s to come for MMORPG. So far, the tweet teases a short gif of the upcoming cinematic. The short clip shows Eveli Sharp-Arrow in some amount of pain or discomfort by a book. Exactly what book is unknown but some are speculating maybe it’s written by the Daedric prince, Mehrunes Dagon.

The latest expansion Greymoor which took players to Western Skyrim, followed the Dark Heart of Skyrim, which was first teased during TGA 2019. As for where we’ll be going next is a mystery, but we’ll be tuning in live on Twitch to follow The Game Awards 2020, so you can check out the reveal live with us.

Geoff Keighley this week during a Reddit AMA revealed there would be a dozen or so announcements/reveals this Thursday, including triple-A and indie titles. Dragon Age 4 and Crimson Desert have already been confirmed to be getting a closer look during the show.

The Game Awards 2020 will be live on December 10th at 4:00 PM PT / 7:00 PM ET / midnight GMT. A pre-show will take place 30 minutes earlier hosted by Sydnee Goodman. Be sure to join us on our Fextralife Twitch channel as we’ll be watching and reacting live during the show.

For more news be sure to check out next Elder Scrolls Online Text Adventure Game Playable On Twitter and The Games Awards 2020 Will Feature ‘A Dozen-Plus Games’ To Be Announced.