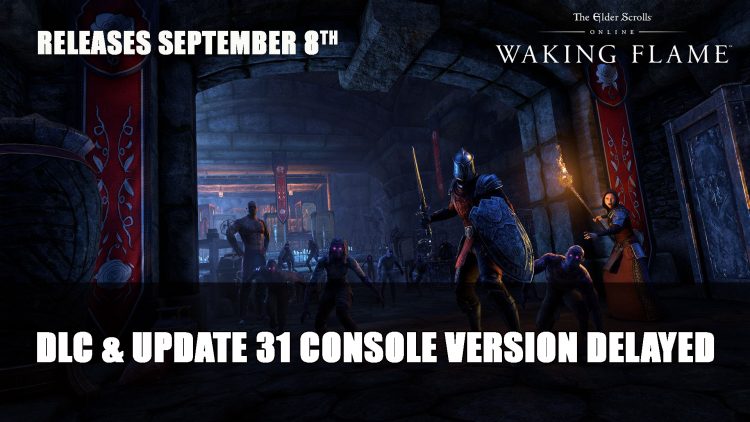 Zenimax Online has announced the next DLC Elder Scrolls Online The Waking Flame along with Update 31 will now release on September 8th.

The Waking Flame DLC and Update 31 for the Elder Scrolls Online has been delayed to September 8th on consoles. Previously the update was slated for August 31st, but has been pushed back a week for a “more stable build, allowing us to include additional fixes before the new content goes live” according the latest official post. The PC, Mac and Stadia will still be releasing on August 23rd as planned.

Update 31 is a free update for all ESO players which consists of bug fixes, quality of life and performance improvements. Players will be able to use a reply function for in-game mail. There are also new houses, furnishings and houseguests in the in-game Crown Store. The Waking Flame DLC adds two new dungeons The Dread Cellar and Red Petal Bastion. For more details on The Waking Flame DLC and Update 31 you can find it here.

Previously the developer announced new details about the Elder Scrolls Online Console Enhanced Edition which will be adding improvements to resolution including enabling dynamic resolution scaling for performance mode on new generation consoles. There is also a new HDR mode providing a new hue preserving HDR mode and more which will be arriving alongside Update 31.

Those who want to try Elder Scrolls Online for free can check out the Free Play event which is currently happening across platforms from now until August 31st. You can access the base game plus Morrowind plus check out the prologue quest for Blackwood.

The Elder Scrolls Online: The Waking Flame DLC will release on PC and Stadia on August 23rd. For those on Xbox One, Xbox Series X|S, Playstation 4 and Playstation 5 now on September 8th.